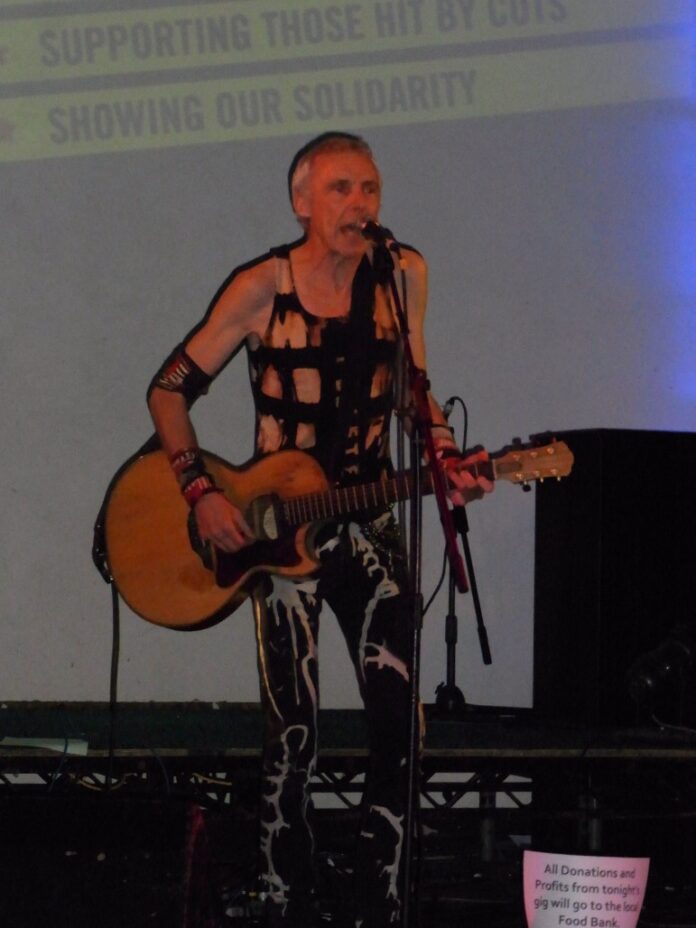 ‘We Shall Overcome’ Anti-Austerity Fundraiser

Oct 2-4th, across the U.K, music venues took part in a range of anti-austerity fundraising gigs under the banner of ‘We Shall Overcome’. Showing solidarity with those affected by government cuts, while celebrating music and culture. My nearest venue was Club 85 in Hitchin, a fine club which also managed to raise a vast array of supplies for their local food bank.

First up tonight were Bedford’s finest agit-folksters, Fishwife’s Broadside. Their brand of socially-aware protest songs fitted in perfectly, especially as they aren’t short on tunes, either. The sound was good out front, which for an eight-piece band is a relief.

Next on were The Astronauts, slimmed down from full band to duo tonight. Self-styled “eternal long-haired losers”, formed in 1977, Mark Astronaut remains a lone voice and unique apparition. Their set comprises songs which have shades of The Kinks, Cardiacs, performance poetry and some simply indescribable things, all done with passion and some humour. Great guitarist, as well.

And so, it is time for TV Smith to entertain as only he can. I saw his Adverts set at Rebellion, but missed the acoustic set, so I’d been looking forward to tonight and wasn’t disappointed. TV has a wealth of solo material to draw on, so we are treated to newer classics (to me) like ‘I Delete’ and ‘Expensive Being Poor’, with an intimate chat between songs. Encouraging us to dig deep for funds tonight, his songs hit the right balance of political conscience and social awareness. There’s no preaching or heavy handed ideology, just a man with a guitar and a desire to connect.

Naturally, we get ‘Gary Gilmore’s Eyes’ and ‘Bored Teenagers’ but, really, it would’ve been just as great without them. Not many songwriters get better with age, though many think they do. TV Smith is an exception. Tonight he reminds us what ‘in it together’ can actually mean as a force for good.  Well done to everyone who came here tonight and the staff and crew who made it happen.