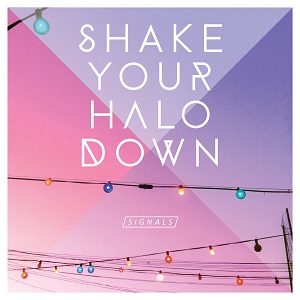 There seems to be an element of mystique surrounding Shake Your Halo Down, which is nice. The brainchild of main man Chris Charlton from Wakefield seems to be one of the few things that a quick dabble of Google will reveal. That’s good as the music is given the chance to stand up on its own merits and it does.

The EP also boasts guest appearances from Stewart Ramsay (Bad Owl), Chris Price (The Unthanks), Kerry Ramsay (Laboratory Noise) and vocalist Olivia Cherry, but to add more secrecy which tracks they are on is unclear!

There are four distinct sounds across the quartet of tracks here. Opener, Stop Talking About The Weather has a fierce pounding drum and the harmonies between male and female vocals are perfect. A simple guitar solo breaks up proceedings before the hook continues once again. It’s a highly infectious melody which could well become your earworm for the day.

Sometimes I Don’t Believe The Things You Say features a broad Scottish accent of spoken words with an accompanying female vocalist (Cherry at a guess). Maybe a sweeping generalisation, but the main vocal does remind of the Trainspotting opening sequence. It’s near ‘funky drummer’ beat is clean and precise and the singing vocal, whilst sounding like it’s recorded in a shoe box, adds a twist and a commercial hook.

A slightly more experimental Undercover has an initial jazz/funk backbeat with the odd hint of a Stone Roses rhythm guitar thrown in for good measure. The backing is sparse until three minutes when a synth dance sound is introduced to liven things up once more. Again, male and female vocals merge to make a really interesting track.

With closer This House Is Mine there’s more than a passing resemblance to the mighty Cabaret Voltaire circa their Code album where a frenetic dance sound combines with single soundbytes and hushed vocals. The speedy synth effect is interesting as it moves along with very little percussion accompaniment. Essentially a dance track, its seven minutes soon pass by with another highly infectious descant.