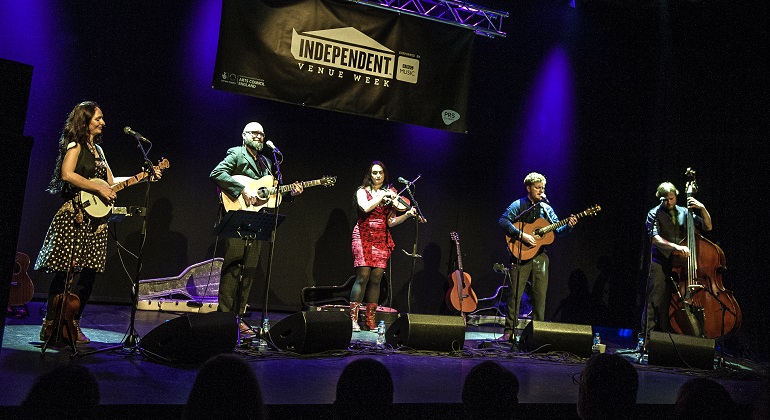 It’s Independent Venue Week around the country and at  The Met a fearsome double bill headlined by the Shake The Chains collaborative saw the taking up of arms on  the theme of  personal and political commentary, stirring the blood and warming the cockles.

It felt a bit like Crackerjack,  the kid’s TV show from the sixties and seventies, of which a healthy portion of the knowledgeable audience, no disrespect meant, would/should  be able to recall. At the frequent defiant ‘up the rebels’ calls of “shake the chains!” there was an almost uncontrollable desire to shout it back with a passion. All part of the fun.

So lined up across The Met stage , Findlay Napier, Hannah Martin, Tim Yates and Nancy Kerr – the troops – stood, admirably marshalled by their glorious leader Greg Russell. Together they delivered their rally cries, their songs for a cause and songs of inspirational people. Chart hits too with Pete Seeger’s  If I Had A Hammer kicking off proceedings . For the record, Wikipedia (if it’s good enough fo Greg Russell’s song research, it’ll do here) tells us it was a number 10 hit for Peter, Paul and Mary in 1962 and then went to number three a year later when recorded by Trini Lopez.

They have an album’s worth of material to count on plus some new additions to the set since their last trip. It’s a set of songs that’s also been finding some mileage in their own solo outings. Greg’s E.G.A (also recorded for his debut Inclined To Be Red) sounded splendid backed with two guitars and two fiddles and we even had Nancy apologising for playing The Defiance Of Mountains which had featured in her last visit to the venue in her solo band;  who needs an excuse though  to play a song again that includes the brilliant line in the introduction “so how’s the revolution going in Britain?”

With the Sheffield massif making up the majority of the band, Hannah Martin’s soft Devonian tones and multi instrumental skills shifted the scales with a Southern connection, yet the impressively vibrant and impressively bearded Findlay Napier Scots invasion came complete with muted (you had to be close up) tartan/checked suit. His Freedom Come Ye All, introduced as one of 4,  should possibly be the Scottish national anthem ;  certainly in its sentiment, one that advocates the values offering a welcome (and naturally a dram) and a hand of friendship. A rousing and uplifting first half closer. Stirring to the point that with your eyes closed you could be striding forth through the heather, the only thing missing, a wee  skirl of some bagpipes.

The bass players are always portrayed as the quiet ones; Tim Yates’ questioning Side By Side may have been a small vocal contribution, yet his double bass provided much of the canvas for the rest of the instrumentation all night. Particularly so in providing the ominous drone that shifted the uplifting towards the  chilling – Nancy Kerr, having led a walk through the trees, weaved  up the tale of Victor Jara,  the musician from Chile, a figure who even Springsteen has named checked.

The brief guest appearance of Commoners Choir (there’s a temptation to try to add an apostrophe somewhere, but for the record, they are a choir of Commoners, not a choir belonging to Commoners, hence the lack of apostrophe) saw them selling  themselves impressively in a second half interlude. No less reflective but significantly more to the point, within a few minutes we had an angry song,  arses, two fingered gestures and words that rhymed with ‘Jeremy Hunt’.  When the first words sung are “get off your arse” and then repeated frequently, you can talk about making an impact. Four small words when Findlay Napier admitted it took him a song to deliver the same message. 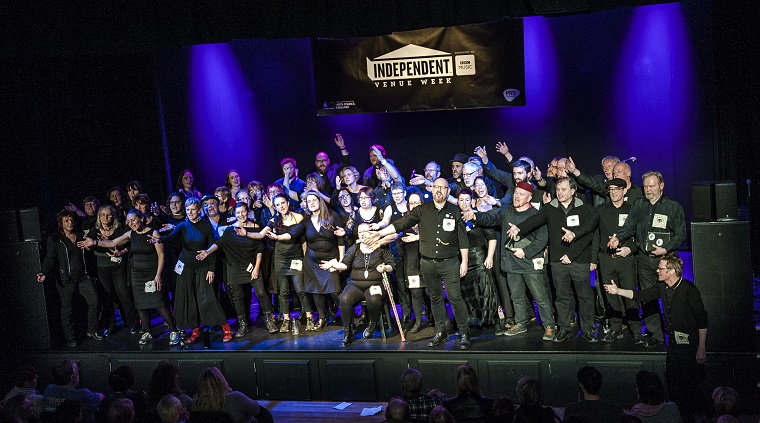 Forty plus singers decked out in black and their badges of honour safety pinned to their garb, were led by  through a strident and well received set by  anarcho-punk Chumbawumba man Boff Whalley. And yes, there was almost a moment when you thought they were going to find ‘that’ rhyme for Jeremy Hunt…but they couldn’t.

With a couple of unplanned off mic moments – a bit rebellious and maverick, but when the meter needs a shilling, what else to do but step forward and play unamplified…“shake the chains!” – it was down to the Shakers’ (seems fair to use the term which is also the nickname of the local football team whose current plight belies their name)  title song, their theme tune, a raucous acoustic  rock funk romp with some bluesy fiddle from Nancy – the message, a Commoners Choir styled short and simple “no-one will do it for you.”

Coming full circle, the Seeger anthem, We Shall Overcome, was given a reading that ran close to its gospel roots with not only the Shakers, but the massed ranks of the Commoners too, plus a few in the audience. The Floyd’s David Gilmour might have been inspired to call his last album Rattle That Lock and play his music in the Albert Hall and amphitheatre of Pompeii,  yet it pales into insipid insignificance compared to the eloquent and erudite  display that this gathering  have taken round the provinces.

Shake The Chains are online here.