Newly signed to Mute, ShadowParty, release their debut album today via Mute Records which captures the band on a sonic sojourn to the stratosphere and back, with guest appearances on the album from Denise Johnson (Primal Scream / A Certain Ratio, Nick McCabe (The Verve). Also crashing the party is LA-based DJ Whitney Fierce, who appears on backing vocals, and Joe Duddell, the Manchester-based arranger who has lent his orchestral finesse to the likes of Elbow, Blossoms, and New Order; for whom he created and scored a 12-piece synth orchestra for a run of Manchester International Festival shows. Matt Mead catches up with Josh Hager from the band to talk exclusively for Louder Than War

LTW: Can you please let me know your first memory as a child, what age would you have been?

John: My earliest childhood memory is of two men in black 40s looking suits with fedoras visiting me as a baby in the hospital. Not sure if it was a later dream or a real memory.

What is your first musical memory?

One of my earliest memories is laying on the hood of my parents car in the driveway throwing a yellow glider up into the perfectly blue summer sky and Paul McCartney’s Band on the Run wafting through the windows of the house. My first record was Draw the Line by Aerosmith.

Not sure what serious music is. But, the first record I bought with my own money was War by U2, because I thought the cover looked cool.

Did you have a vision of being a musician at this point? If so, who inspired you to have this vision?

There was a distinct point when I could feel the crackle of something new in my brain, like a new neural pathway being burned into my consciousness, when I saw David Bowie and Klaus Nomi on Saturday Night Live and the first time I saw Devo do Satisfaction on SNL as a child on a small black and white TV in my room

When did you first start to play an instrument? Who were your influences to take up this instrument?

I was around 12 when I first started playing guitar. My brother was my first influence and then a friend gave me a Jimi Hendrix record and I was hooked. I remember not really wanting to learn his songs note for note, but I really wanted to get into his mind and think and feel like him. I was obsessed.

You’ve each performed with some stellar names in the music business. Before you joined Devo, can you tell us a bit about the bands were you in?

Before Devo I was in a band called The Elevator Drops, a theatrical band of trouble makers whose concept was “what if Kiss actually had good songs and Malcolm McLaren managed them”, later I joined a new wave band called the Rentals with Matt Sharp from Weezer.

Were you a big fan of Devo before joining the band?

Yes, I was a massive fan of Devo before joining them onstage. They were in my top three of all time.

How did you each of you join up with the bands you’ve performed with? Were you spotted playing at a gig somewhere etc…?

I joined Devo after the great Bob 2 had passed away. He was a hero of mine, and some very big shoes to fill. I wanted to make sure he was honoured properly. I had already worked with Devo with additional production for the Something for Everyone record.

Fast forward a bit to ShadowParty. How did the band come to fruition?

ShadowParty came together when Tom had moved one town over from me in Massachusetts and a mutual friend had suggested we meet. Tom rang my doorbell and we almost immediate clicked. Writhing and recording what would become the song The Valley that same evening. 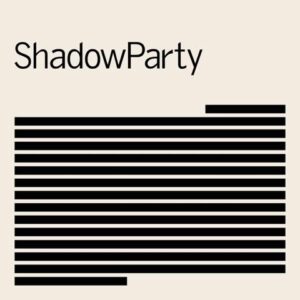 Was the material already to hand or did you jam out the songs as a band?

Most of the ShadowParty material was written for the record by the band. We would start with demos and then the band would flesh them out with parts and arrangements. We would fill each other’s gaps and blind spots. Since we all have such respect for each other there are rarely disagreements as to direction.

You’ve been performing with the legend that is Denise Johnson. How did you collaborate with Denise?

Denise would meet us at a studio in Manchester. We would run through basic ideas and she would always surpass what we had in mind . Such a great voice. She usually got most vocals in one or two takes. A perfectionist and absolutely lovely person.

What can fans expect to hear from your debut album?

I think fans can hear a definite influence from our respective bands. But, in addition, our own personal tastes that extend beyond. We are making music that we want to hear and hopefully they would too.

You’ve played a number of small gigs already. How were the shows, and how did it feel to be playing together as a band on stage?

I, for one, thoroughly enjoyed the shows we played. The audiences were very receptive and I believe the live show surpasses the recorded material. Or, at least has a different angle on the material.

Do you prefer small venue gigs or the outdoor stadium gigs?

I don’t have a preference to indoor or outdoor gigs I suppose the sound is a bit more controlled indoors.

Finally, who are your currently musical influences at the moment? What’s on your turntable?

Right now, I’m in the process of moving house. Which means that as I pack up my vinyl collection I keep discovering and rediscovering records I haven’t heard in a long time. Which is making the move take a bit longer than I had anticipated! On my turntable right now is Alice Coltrane Journey to Satchidananda and MGMT Little Dark Age (I’m in love with this record).