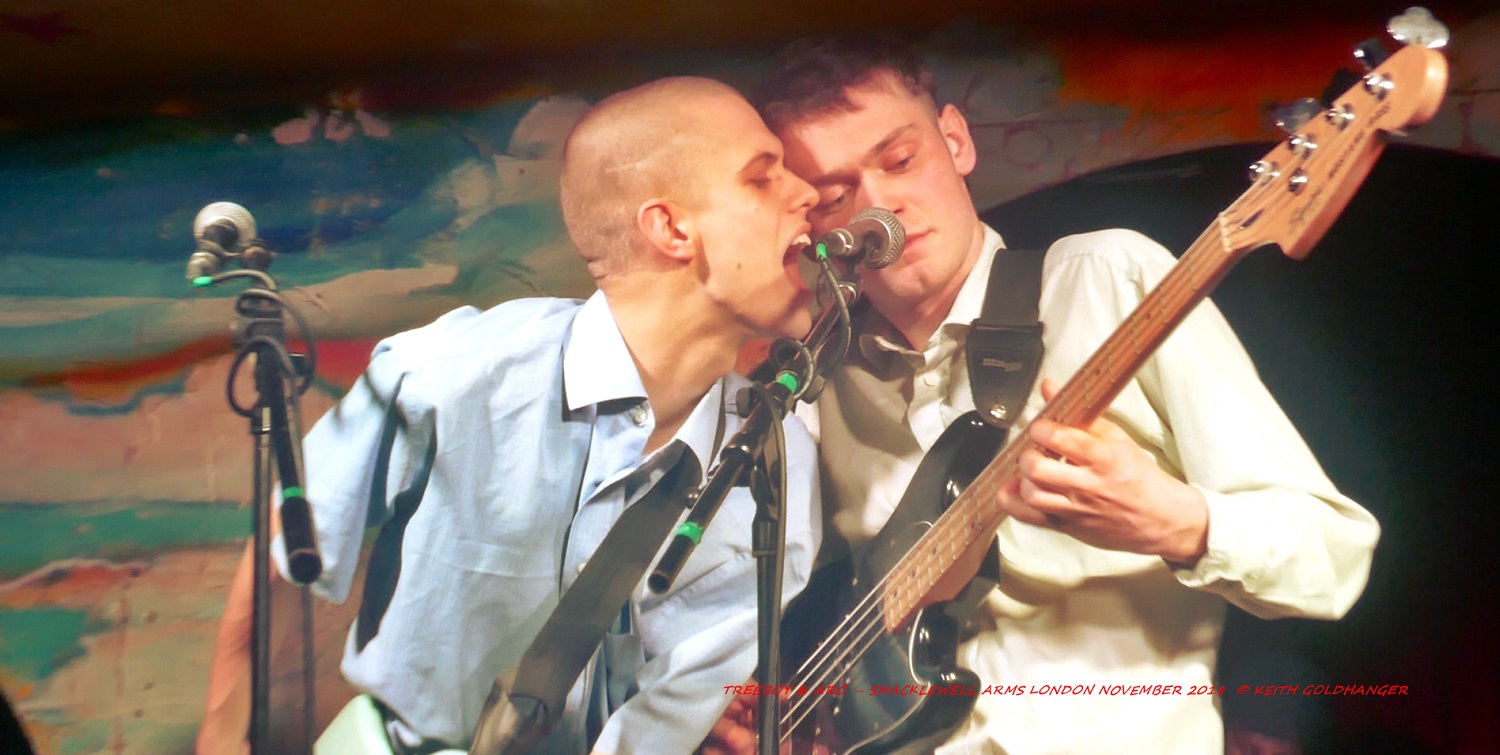 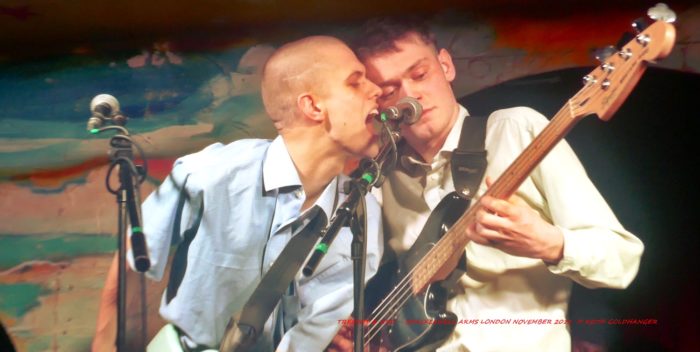 Where do these great bands that end up on our best of the year lists come from that we’ve all been spending our hard earned wages on recently ?
Some of them begin by turning up occasionally on Sunday nights in venues such as East London’s Shacklewell Arms. Keith Goldhanger reports.

“This turned out to be one of the best shows of 2018” we are thinking as we stagger home through the litter-free streets of East London, remembering the trains are not running, boarding an empty bus and finally getting our breath back after a five-hour session of noise that we expect you’d all love as much as we did.

The venue is about three quarters full, one band (Posa – and we love Posa) have failed to turn up, it’s another free gig and three of the five bands we know are decent bands that some of us have seen before and who we said would be worth a second look.

…Twelve months in which we have seen Idles on the telly, Shame on big festival stages, loud angry bands that have brought fathers and daughters, mothers and sons friends and lovers all together to have a pint, throw a fist in the air and queue up at the merchandise stall before going home. It’s a healthy activity, it’s what we’ve been continuously good at in the UK over the years and it’s easy to take for granted. Sometimes we go out for the hell of it and sometimes we get home and realise we need to document this stuff. If we were any good at this we’d be previewing not reviewing, but be rest assured that these bands won’t go away. Take notes, hit the play button and grab what you can when they next play in your town.

The opening band Hope are from Berlin, consisting of one loud guitar (everyone owns a loud guitar this evening) and a wailing loud buzzing synth with heavy tribal drums alongside a frontwoman who stands and stares and belts out the words for us early arrivals. It’s intense and exciting. It certainly wasn’t what we expected thirty seconds earlier as we walked through an empty bar to catch a glimpse of whatever was going on around the back of this building at six o’clock on a Sunday night.
They make us wonder where Savages went.
This is a good start.
Incredible actually.
We could have gone home satisfied after ten minutes.
We didn’t.

The noise the other four bands make tonight is a noise not too dissimilar to the music we’d listen to in the early 1980’s – post punk if you like – Joy Division before they learnt how to play their instruments; Buzzcocks; Fall; Magazine; Undertones – all the good names we still remember but don’t dip into at home as much, but are glad to hear when we go down pub (the right ones of course) – and are as relevant as the bands already mentioned whose T-shirts we find ourselves wearing every time we leave the house today. None of these bands sound the same though – and this isn’t one of those ‘next Idles’ messages we’re displaying here either –  however what these bands have managed to do is tear a big hole that sits snugly in between the American hardcore bands that we fell in love with as the 1980’s ended, the good fifteen minutes of a Peel show in 1979, and the smidgen of eccentric Britishness we saw in the late 1990’s by bands such as Bogshed or Sperm Wailes to name but two. This is what we want at the moment: Sleaford Mods, Shame, Idles and loads of other bands that aren’t doing ads for fashion magazines or singing about falling in and out of love during a gap year. Loud guitars, healthy messages to convey with a bit of shouting and repetitive crashes that we all love and have loved throughout the years. This is the kind of music that we blame for the obsession we have decades after first checking to see why the radio was sounding strange and then realising we were listening to another DIY release being played late at night on Radio One.

Luxury Apartments have a big loud bass that introduces more than one tune, crashing and squealing guitars complemented by dual vocals that remind us of the Lurkers without actually sounding like them. It’s a white knuckle ride for half an hour that doesn’t ever slow down or lose any appeal the longer it goes on. The adrenaline is flowing, the obsession with this stuff starts kicking in and one begins to wonder whatever happened to The Electro Hippies. By now it’s decided that Monday mornings can now do one. 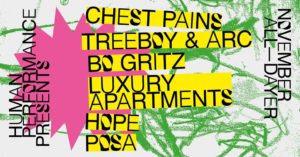 Bo Gritz are a new find for some of us and a trio that belt out hypnotic short stop/start crashing riffs using one or two notes, yet again have the same driving bass and wailing crunching guitars that all bands seem to have tonight but without sounding the same as each other. They give us the impression that whilst writing these tunes they inadvertently found some great bits they then decided to repeat before throwing out all the bad bits of whatever song they were ever trying to write to begin with. The results produce fabulous head-nodding exciting body-jerking moments. Equally as exciting as those introductory shows Big Black came and entertained us with all those years ago, and another band we expect you’ll all love – they’re based in London, we’ll meet again it’s expected and this years Tape EP is something you need to hear.

Treeboy & Arc  (main photo) are the best of the lot. They dress like Joy Division, they look like they’ve all been in a scrap and picked themselves up off the floor without a scratch and they look like a gang fed up with hanging around bus stops. There’s so much going on up on stage that the viewer finds themselves waiting for it all to fall apart and collapse in a heap. It doesn’t, it crashes, builds, throbs and glides effortlessly into another half an hour of blissful noise. We remember Eagulls from their same town (Leeds) and wonder where they are at the moment. We remember The Gang of Four and Killing Joke and know exactly where they are at the moment. How can anyone not like this?

Finally Chest Pains, also from Leeds and a reminder that two chord thrashes, simple riffs and mid paced songs are as good as the fast ones. At least one member has remained on stage after thrashing his guitar with Treeboy & Arc and the noise provided is just as heartwarming as everything else we’ve heard so far today. They treat us to old favourite (if we call a year ‘old’) Shame, and new tune Love Thy Neighbour begins “The NHS is going down but Richard Branson’s richer now….”. Shame (the band) come to mind. Killing joke are mentioned as we ask ourselves whatever happened to early in the year contenders Hotel Lux.

This is a country full of this type of music as 2018 comes to an end. It won’t all get through to the mainstream, we know this already (it’s Sunday, the people that can nudge these bands towards the masses will be at home catching up on The Apprentice), but we also know that there’s a lot of people not here tonight that we would like to nudge and bring this kind of event to their notice. If you can’t make the free shows then at least grab the five pound ones when they appear next year because half a dozen of these are worth at least one of the big ones in three years time. You don’t have to come along for the ride, but we’re sure you won’t hate us for bringing up the subject now and again.

Free gigs, great bands. Not exactly as flamboyant as a 1970’s Sunday night in front of the telly from the London Palladium but better than whatever is on the telly in 2018.

And as good as all the bands we have been spending all our money on this year to see, to hold and to wear.

Gig of the year then ….possibly. Make the effort, give all these bands a listen.