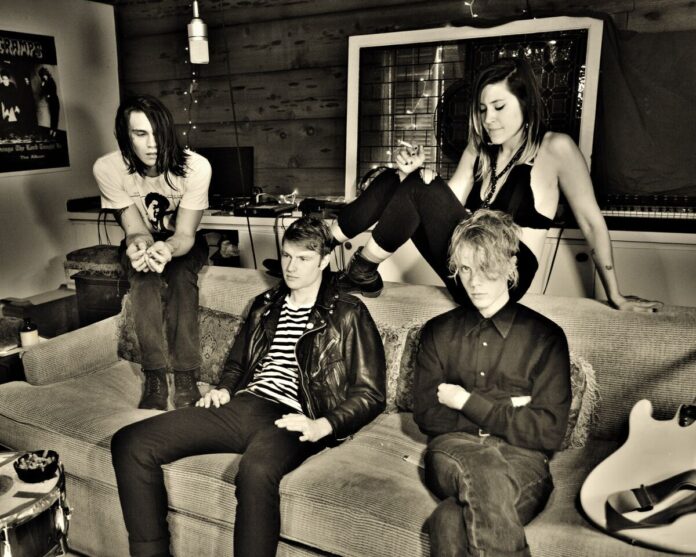 An LP “…where surf punk, industrial and throbbing jostle for soundspace and whose title alludes to all manner of strangeness” said the Guardian. “Bollocks” says Ged Babey.

In a break from tradition, I’m gonna review this album even though I don’t think it’s the best thing since sliced eyeballs. It’s OK. It’s interesting, but it’s not quite … right. Give them a year maybe and they could be magnificent.

“The album title is inspired by a form of spirit channeling that { guitarist / keyboardist} Wuebben was experimenting with one night. Whilst doing open eye meditation he felt thousands of hands reaching down towards him – a vision that was both frightening & exhilarating. The experience left such an impression on the band, it became the first track on the album as well the album title.”

The press release also name dropped The Cramps and The Birthday Party, mentioned the occult, “…bleakness & catharsis…” and how “…they take their name from an astrological term relating to harmony and the ease of expression of two conflicting elements.”  The names-dropped are based on pure superficialities and are to be ignored.

Sextile are to be applauded, I guess, for making a serious attempt at doing something dark and vaguely original and not taking an easy commercial route. I refute the surf guitar and rockabilly parts of their promotional material though. Presumably they wanted to avoid the word Goth / Gothic and more accurate comparisons to The Cure circa Pornography mixed with TG and Daniel Ash goes No Wave and ‘primal scream therapy’ type vocals.

The drumming is of a lumpen and untutored style and it’s lacking any swing or groove. There are some fashionably droney vintage synth sounds that do compliment the cheese-grater guitar and sometimes the jam-like pieces do actually coagulate to form ‘songs’. At their best Sextile approach the experimental post-punk sound of The Passage and there is the tiniest hint of Rema-Rema (early 4-AD band whose Wheel In the Roses EP was  Marco Pirroni’s finest hour) and another thoroughly obscure reference point is Dave Balls In Strict Tempo solo album where he worked with Psychic TV amongst others.

If you remember those, then you might well like Sextile, a moody bunch of sexy motherfuckers judging by their picture, but who have a few demons to exorcise and need more focus and less of an everything-at-once approach.

The time is not quite right for No-Wave Goth Electonix-v-Guitar Screamo … yet.