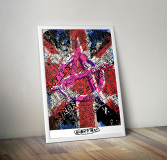 Anarchy In The U.K. is part of Youngerman’s ‘Musical Routes’ print series; which also includes works relating to The Jam and the Clash (available at the LTW Shop). The Sex Pistols design is limited to just 150 prints

This full colour design features the real roads and famous landmarks around 1970s King’s Road, London except the roads and landmarks have been changed to songs and people associated with The Sex Pistols and punk movement.

The vintage distressed design is based on the true region of London as it was in the 1970s, with hand written name changes in the very streets and locations associated with the seminal punk band; these include the The SEX shop on the King’s Road where a young John Lydon mimed to an Alice Cooper track on the shop jukebox.

For more images and the opportunity to order a print please head to the Youngerman site.

Each artwork is hand drawn from an original period map of the region with permission of Geographers’ A-Z Map Co. Ltd. 2017.