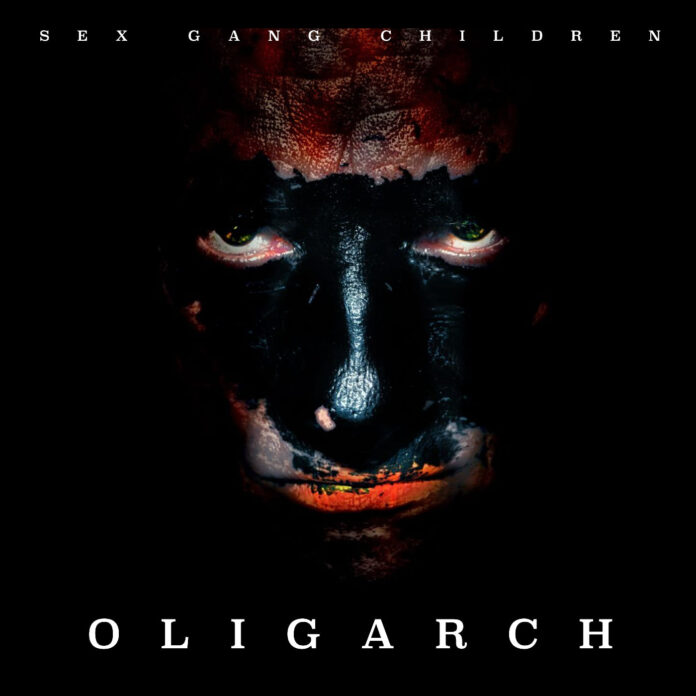 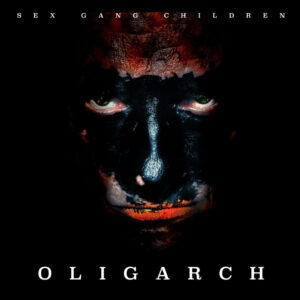 Sex Gang Children were one of the goth pioneer’s back in the early eighties, often misunderstood by critics, but beloved by the dark-clad, fishnet wearing hordes that crept out at night to see them play at some very memorable gigs. Indeed, one story has it that the word goth was first used about the band and their followers. Their first album, Song and Legend (released in 1983), remains a classic of the era and since then Andi Sex-Gang has led the band through numerous incarnations, and now unleashes their latest album, Oligarch, upon the world.

Oligarch hasn’t lost any of the theatricality and darkness of Sex Gang’s early records. Often it sounds as if Brecht & Weill had hung out down the Batcave and written a musical for the nascent goth scene. Oligarch is a tale full of paranoia and dark dreams, but hope in the artistic endeavours of humanity to raise us above the flaccid money men who rule the world.

The music is imbued with an industrial beat, whilst Andi delivers his lyrics more like impassioned poetry than singing. At times sounding like a demented Leonard Sachs, spouting words that twist around your head and baffle your mind. Andi uses words to weave reality into something strange and then flip it back so that we see the world in a different way.

Opener Dead Peasants starts dreamlike and then an industrial bass kicks in and the hi-hat is like a ticking time bomb as the vocals deliver nightmare visions, with the guitar squealing like a demonic violin. Cannibal Lives, an attack on capitalism, has a rhythm like hammer blows as Andi blasts out a sermon from an unholy pulpit, with lyrics that have always had a touch of the Lewis Carrol’s about them: So cough up doc and pancho pillock. Laughing stock and fanny slam with dazzle stars and dickie brows, where sheep are chic and dumb as cows.

Masquerade has a growling bass and a steady beat with cascading guitar splattering like a Pollock across the rhythm. Bang! is slower paced but builds tension with its tribal, incessant sinister feel. Seraphim Fall is more laid back with a very cool bass line, a lament for the fall of the shining ones. Asia Divine is like the early goth sound with its waltz beat.

Puritan Now could be early Siouxsie. It’s a downbeat with cascading coruscating guitar noises over the top. Andi’s lyrics are like a mash-up of dream words and cut and paste monstrosity. Freud would have a field day. But from the perplexing words, he often pinpoints with a surgeons eye, as here where he sums up capitalism perfectly: Trickledown economy just the rich performing sodomy on all the poor bastards left out in the cold. The Gorgon & The Sow has a heavy industrial beat with buzzsaw/electronic fuzz guitar. One feels lost in a dark forest, imbued with hideous creatures at every turn and evil disguised as innocence, when listening to Andi’s lyrics, conjuring up, as they do, a world of amorphous terror.

Berlin Kiss has Andi channelling Marlena Dietrich, as he once channelled Piaf on Les Amants D’un Jour – those lonely, aloof vamps a perfect foil for him. It’s a cabaret of the melodramatic, in tear-stained make-up. Death Mask Mussolini was the lead-off single for the album (reviewed it here). It’s a great rocking single that retains the old dark groove of the goth, but with a modern-sounding sensibility. It’s got a great driving rhythm, overlayed with a guitar motif that’s like a glam razor blade.

Album closer, Barbarossa Revisited, is a slowed-down version of a song that first appeared on 1993’s album Medea. It holds tension with a guitar sounding like an outtake from Bela Lugosi’s Dead, and works really well.

Oligarch is a soundtrack to dead theatres, concert halls and boarded up shops, but a prosody to the spirit of artistic re-birth. It won’t be to everyone’s taste, but this is band that has always gone its own way, led by Andi’s solitary vision. As the band themselves declare: Beware the danger of conformity and the mediocrity that blinds us.