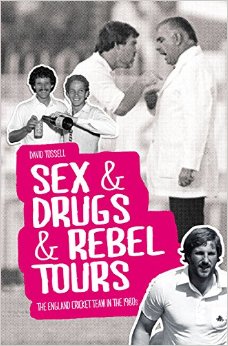 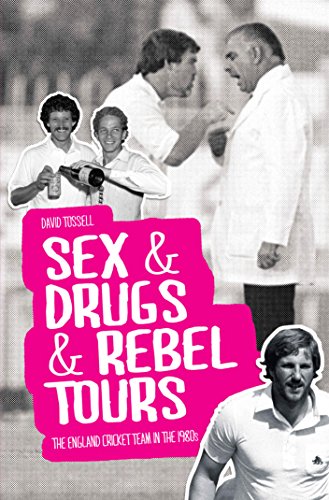 David Tossell is responsible for one of the two best cricket books I have read in ’Grovel’, his study of the 1976 West Indian tour and the importance of their team to members of the Caribbean community in Britain at the time (‘A Last English Summer’ by Duncan Hamilton is the other if you’re interested).

In ‘Sex and Drugs and Rebel Tours’, Tossell takes a detailed and engrossing overview of the events of a cricketing decade that often beggar belief in retrospect. This is an essential study that clearly demonstrates how closely linked to the main social and political issues of the decade English cricket managed to find itself. The two ban-flouting tours of Apartheid South Africa near the beginning and end of the 1980’s are clearly leading issues (even if the second didn’t actually take place until 1990), but also prominent are the other media sensations referred to in the title, the assassination of Mrs Gandhi and the Bhopal disaster. Even the cerebral English captain Mike Brearley managed to find himself embroiled when his decision to grow a beard to look tougher during an Australian tour coincided with the Iranian Revolution and saw him saddled with the nickname ‘Ayatollah’ much to the amusement of the Australian crowds. These events are fascinating enough in themselves, but Tossell manages to weave a detailed cricketing narrative throughout that will satisfy most statistically- minded enthusiasts. He also manages to find an appropriate song title for each chapter; ‘A New England’ for the triumphant 1985 Indian Tour and ‘Heaven Knows I’m Miserable Now’ for the woes of captain David Gower on the doomed tour of West Indies in 1986 being but two examples.

A number of cricketing legends span the decade, most notably the Herculean Botham and the gifted yet supremely laconic Gower. The former a force of nature whose off-field activities, be they charitable or otherwise, seem more draining than anything on the pitch. When you consider that those include some of the greatest feats performed on a cricket field, Headingley and Old Trafford in ’81 to cite just two obvious examples, then you have an idea of the capacity of a rare human being. The latter a man of such an easy and graceful talent, to whom the game seemed to come so easily that he seemed hopelessly equipped to crackdown as a leader or even give the impression of application as chaos reigned in the Caribbean. However, conversely he was able to win in India against all odds and the backdrop of the assassination of Indira Gandhi and the British High Commissioner hours after he had been with the England team so it is difficult to stereotype Gower as the gifted under-performer.

Over the course of the decade a vast array of players appeared and this book will doubtless jog memories of brief flashes of brilliance (Norman Cowans in Australia perhaps) alongside those who never really got a fair chance. Selectorial inconsistency was such that a revolving door should have been fitted to the England changing room including four captains in 1988 against West Indies. One of these, Chris Cowdrey, was such a left-field choice, he couldn’t even gain admission to Headingley for practice as he wasn’t recognised. Out of the cast of hundreds emerges one player who probably epitomises the decade for me, Nottinghamshire’s Derek Randall. A supremely talented and entertaining player who was repeatedly dropped and re-selected but never afforded the consistent backing that today’s players enjoy. Maybe he was too unconventional with his fidgety manner, maybe he just didn’t play for the right county but he took on some of the best pace attacks of all time with no little success. We should also mention Mike Gatting, the Middlesex Captain who seemed to get more second chances than many others, and whose nose to nose confrontation with Pakistan umpire Shakhoor Rana in 1987 almost led to the cancellation of the tour and almost certainly still resonates today when these two countries meet.

Which brings us to the title and firstly the ‘Sex and Drugs’ element. Whatever the truth behind the allegations, which first surfaced on a tour of New Zealand in 1983, it undoubtedly signals the start of a tabloid press obsession with the private lives of sportsmen and was probably inadvertently started by Ian Botham’s decision to write a column for The Sun. Poor performance on the pitch during this tour and the West Indies Tour in 1986 (when Botham again featured at the centre of allegations which were never proven) almost certainly enabled the non-cricket reporters to have a field day but it is impossible not to be struck by the retrospective defence offered by some of the players that it was boys being boys away on tour. Hardly the attitude of the ultra-professional sportsman and certainly one that jars with the justifications offered by those who went on the rebel tours to South Africa that they were professionals and had to earn a living. Well, I’m sure we all know professionals in many fields and it would be interesting to hear the views of the likes of Emburey or Gatting now if some of those professionals went to a despised regime abroad to work in order to “look after their families”. However, Tossell does a thorough job of showing the possible cricketing reasons why the rebels may have joined these tours but ultimately they were probably just pawns in a much bigger game and it would be wrong to ignore the many vested interests that profited from South Africa during this period of sporting isolation.

David Tossell has done a superb job of chronicling a period of cricket history when the highs were few but memorable, but the lows seemed interminable. Tossell has interviewed a good cross section of the players who offer a fascinating perspective on events and his research is meticulous. It’s a story that had to be told, not just of a cricketing decade, but of a period that saw seismic shifts in society and sowed the seeds for issues that we are still coming to terms with today.