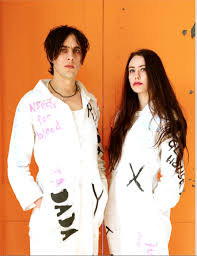 Ahead of their appearance at Roadkill Fest this weekend, Amy Jay Britton catches up with Sex Cells to get their slant on music, art, and witchcraft…

There’s something rotten in Tottenham. I say that in the most complimentary terms possible about London duo Sex Cells; after nothing special, a band appears that are so on your wavelength that you may have had to invent them if they did not already exist. Sex Cells fulfil that for me more than anybody else right now – avant-garde, sexy, infused with magic and artistry. The duo (comprised of Willow Vincent and Matt Kilda, whose art and music I’ve spent the past fourteen years consistently loving) have kept striking gold with a series of aural statements crafted from looping synths, twin vocals and incendiary lyricism.  Latest release Love Is The Exit is no exception – I asked them about that and other things here…

You play Roadkill Festival this weekend. What can people who haven’t seen Sex Cells live before expect?

Given the current climate & the sense of paranoia, do you see yourselves as a band of ‘now’? Is Love Is The Exit seeking to find answers to something?

Whether we are a band of the ‘now’, that’s for other people to decide. For us, music is a visceral response to our environment – we enjoy the physicality of manually playing and manipulating electronic instruments, and bringing a human element to their innately cold emissions. There isn’t a line between our personal lives and the art we try to make – we don’t have that privilege. So, in terms of answers, Love Is The Exit isn’t really trying to provide anything –  in truth, it’s just a story about two people, thrown into physical disconnect across an unforgiving, nightmarish metropolis, trying to find each other despite the modern odds.

Do you think of yourselves as a conceptual art project? What would your manifesto be?

As two writers, we have a habit of conceptualising anything and everything… Over the past few years with Sex Cells, we have created our own universe, probably as some sort of escape mechanism, and so, unintentionally, perhaps it has become a conceptual art project? As for a physical manifesto, we have untold Word docs that could easily be construed as such, but perhaps it’s okay to keep some things for our own reference. We both enjoy the wordplay of works such as André Breton’s Surrealist Manifesto and Tristan Tzara’s Dada Manifesto, and relate to collectives like Thee Temple of Psychick Youth, where the divide between art and life has been erased. The themes we explore tend to arrive via the experiential rather than the existential, because no-one wants didactic music, do they?

Witchcraft seems to be having a ‘moment’ in pop culture. Perfect timing or cultural appropriation?

Yeah, to be honest, we can totally see the point about the current trends towards witchcraft being akin to cultural appropriation. However, there always seems to be a revival of interest in the occult and its signifiers during times of crisis – for example, Gardnarian Wicca and WWII, the magickal preoccupations of youths during the social upheaval of the sixties, and more recently, resistance witchcraft with figures such as Donald Trump and Brett Kavanaugh finding themselves the targets of hexes and binding spells. Therefore, witchcraft becomes identified as the ‘other’ in society, a form of resistance that anyone can tap into. So for us, the witch is a really powerful symbol for the outsider – it’s important to reclaim the term as something positive, especially as so many innocent women (and marginalised men) unjustly lost their lives during the witch trials. Plus, we’re just really into this idea that the occult and witchcraft practices are inextricably woven into British culture, driving us to perform rituals and rites without even being fully conscious of their origins. So, in short, it’s always the perfect time for a bit of magic, and for us, it’s not something that’s restricted to any particular culture or religion, but makes a perfect bedfellow for socialism, feminism, art, and of course music!

Latest release Love Is The Exit can be found here.

Interview by Amy Britton. Find more on her archive or via Twitter as @amyjaybritton and Instagram as @amy.jay.britton