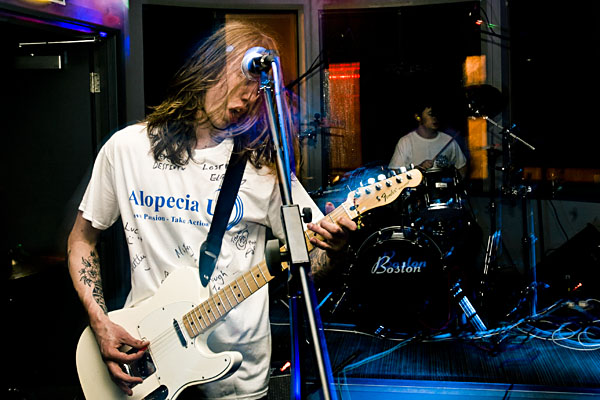 Sewer Rats make rock music that’s full of huge riffs that emerge from a promordial soup of drums and bass. idp catches them for a chat in sunny Meggies.

Sewer Rats are Dean Robbins (drums), Iain Morrison (bass) and Luke Morris (guitar and vocals). They hail from the mighty city of Immingham, aka Ming or even Ming Ming to its friends, and they’ve all been playing in bands since they were in shortish trousers and now along with fellow Mingsters the Ming City Rockers and Grimsby bands like Electric Priestess, Zak Rashid, Ruby And The Knights and plenty of others they’re sitting pretty in the upper reaches of a thriving local music scene which seems to produce quality new bands at every turn.

According to their social media Sewer Rats are a stoner rock band, but that’s a label that they have acquiesced to rather than one they chose for themselves. If they are stoner then they’re a new and peculiarly British offshoot, taking their lead not from the leaders of the US genre like Sleep and Kyuss (although the trio do admit to a fondness for the melodic psych of stoners Dead Meadow) but from the bands of the late 70s who provided their inspiration, the likes of Sabbath, Led Zeppelin and Blue Oyster Cult. 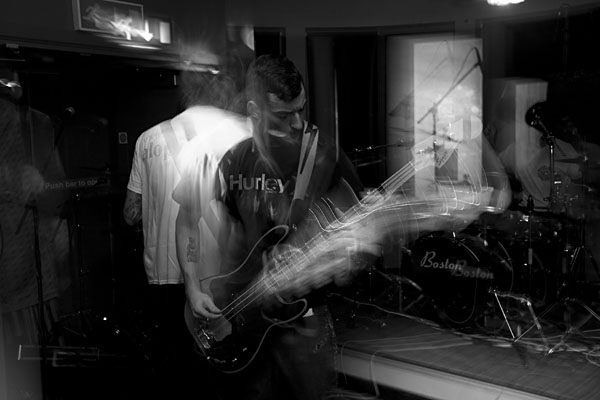 The result is a heavy slow rock sound, at times almost industrial, heavy with lethargic distortion, at times showing signs of cross fertilisation with the spirit of punk, full of threat and menace and songs which start slowly and build inexorably into testaments of anger and rebellion.

“No. We think it’s best to steer clear of all of that. It’s just the three of us on a stage having fun and taking it seriously at the same time.”

They’ve been gathering a head of steam for some time now. After being invited to the smoke by Love Buzzards with whom they shared a bill in Sheffield they were signed by Fluffer Records of Whitechapel and they’ve become regulars at some of the sceniest venues in the capital, like The Shacklewell, The Finsbury and The Fiddler’s. Fluffer will release their new vinyl ep Moneymaker in the near future. Clearly London likes Sewer Rats.

So are they going to move down to Hoxton and leave the Humber behind them?

“Well hopefully. Or rather it’s possible, anything’s possible. And London is the best place for making music, there’s no doubt about it.”

So it seems to be mutual. A European tour may be on the cards as well.

I go to meet them at Waves in Cleethorpes on the day of the BOG Fest (that’s Best Of Grimsby to you) where they’re on the bill with many of the best bands and solo performers from the local scene at an event organised by Phil Stocks of Avenue 44 Music to raise money for Alopecia UK. By the end of the day the festival has raked in over £800 for the charity so well dones all round are in order.

Sewer Rats take the stage after a storming set from Zak Rashid and they do it so unceremoniously that when they start their first song, We Were Never The Same, many of the audience still think that they’re sound checking. It’s a great number, one of the finest pieces of minimalist rock you’ll ever encounter, kicking off with an ambling bass line which continues for a while, seemingly almost directionless, never giving any indication of the trouble brooding just below the surface. Eventually it is joined by some smudges of fuzzy guitar. At length the drums kick in and from out of the primordial soup of noise a riff emerges, uncoiling itself slowly, sometimes falling back but always finding itself again, heavy, dirty and enthralling. The crowd are all watching now. Nobody is under the impression that this is a sound check any more. We are no longer in Kansas.

And then a single burst or vocals, guttural and at times almost incomprehensible, are laid across the top of the mix. “We were never the same, me and you.” The guitar continues, on a new track now, lighter and more melodic, as if it feels that there is still further work for evolution to perform but with this simple statement the track has served its function and it seems to cave in onto itself as it peters out, dying in the mix, possibly to be found by archaeologists with trowels and brushes millions of years later.

Next up is Black Label Serotonin, one of my favourite songs to a neurotransmitter and an altogether lighter affair, it’s an extended jam with a distinct desert feel to it and an laid back guitar sound that evokes memories of the great bluesmen of the fifties, John Lee Hooker maybe or Lightnin’ Hopkins.

So Far Away ramps the volume back up, a frenzy of drums and guitar, staccato and brutal, it’s one of those songs where the central riff repeats itself so rapidly it fills the room like a huge electric heartbeat. “I tried so hard to love you, but you’re so far away” someone is singing but no one really cares because it’s not about the vocal, it’s about the riff that makes the whole room beat time with it.

I Don’t Know Where You’ve Been is the song where the band reveal their roots in seventies rock most clearly, with its driving riff and guitar this could be a lost track from the days of the bell bottomed mullet, cut up and distorted, hung from a nail in the garage and punched for a while. It’s callous and unsentimental and as it winds through the room you can sense heads starting to bang. A few more minutes of this and there’s gonna be brain matter on the carpet.

There’s no big fanfare for the closer. Luke just mumbles “Last” into the microphone and they’re straight into Skint (No Money) which opens with a fine seventies riff that gets faster and faster until it threatens to spin off and form its own band. Somehow they manage to tame it and turn it into a rapid fire blues about the joys of poverty.

And at the end they just stop dead. So there.