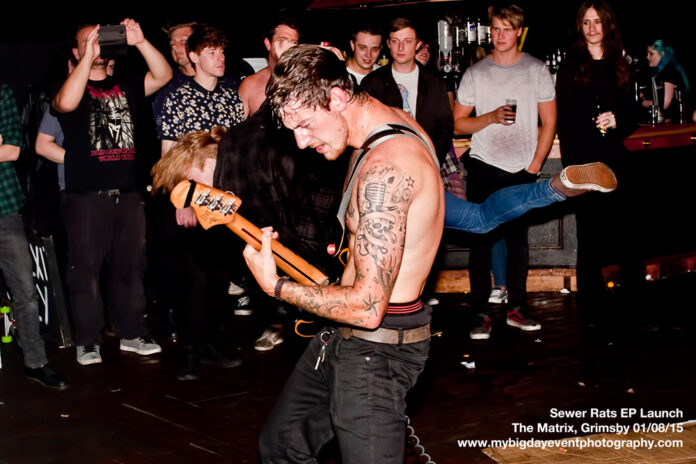 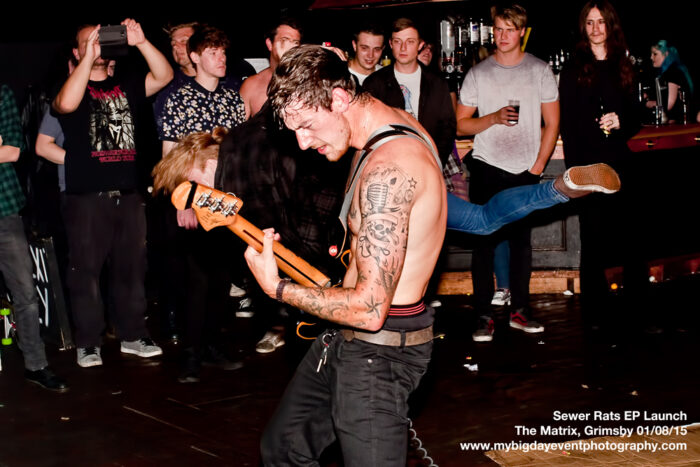 Sewer Rats have been making quite a name for themselves lately. They’ve signed for Fluffer Records, played some well reviewed shows at the Shacklewell and other cool venues and now comes the release of their new EP Moneymaker. They’ve already had a London launch party but this is the local version at The Matrix in Grimsby, just down the road from their home town of Immingham.

There’s a great undercard including local favourites Ruby And The Knights, the unboxably vitreous See You In Tijuana, Darma and Cult Mentality and by the time Sewer Rats arrive the crowd is well stoked and up for the main event and they’re not dissapointed because Sewer Rats deliver a set of the dirtiest, heaviest, most psyched out stonerism that you’ve heard in a long time, songs that start slow and uncoil themselves with deliberate menace, loaded with feedback, searing guitar riffs, huge drums and basslines that set the room vibrating. Luke Morris’s vocals are just about the rawest I’ve ever heard. Imagine the love child of Lemmy from Motorhead and a grizzly bear, kept in the dark for years, fed on broken glass and Scotch Bonnets and that particularly horrible cheap kebab meat that smells like sewage. Stub a few cigarettes out on it. Kick it occasionally. Give it a microphone and tell it to sing. It’s pure Ming. 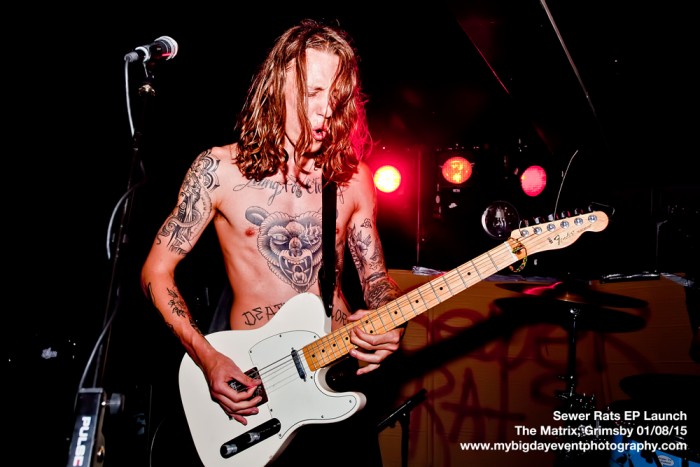 The show that features considerable levels of raw energy and male torso. Granted it’s warm in The Matrix but there’s clearly something about Sewer Rats that’s best appreciated shirtless. They certainly have an impressive gallery of tatts to show off and their ink photographs rather well, especially since they are a band incapable of staying still for more than thirty seconds at a time. Luke Morris on guitar prowls his end of the stage like he’s looking for a gap in the fence while Iain Morrison spends most of the show getting stuck right in to an extremely boisterous hungry hippos kind of pit, crouched low over his bass, fending off incoming traffic or else climbing up the speaker stack to perch grinning while it threatens to topple down. Dean Robbins on drums is inevitably less peregrine but he looks like he’d be up and bouncing off people and walls given half a chance.

Sometimes words seem a bit small. This one of those times. The Sewer Rats sound like something being born, growing and crawling out of a primeval swamp, developing limbs and vocal chords, and of course acquiring guitars and drum kit along the way. They are very loud, but that doesn’t tell you much and they play with a sweat drenched frenzy that makes them gleam in the stage lights and rapidly infects everyone in the room. I spend most of the set hiding behind the speakers (except when they’re being used as a climbing wall), because I’m a coward and because I can’t afford to replace my cameras but when they finish I feel like I’ve been punched in the face with a music clad fist.

The new EP Moneymaker, whose entry into the world we are here to celebrate is an equally invigorating thing – five tracks of bile and blues, menace and caress, guaranteed to annoy the neighbours, damage the foundations of your house and make your eyeballs bleed. My favourite track is Devil’s Blues which has them paying homage to their heroes in Sabbath and Zeppelin but every cut is worth a listen – this is definitely a band that’s going places fast.

At the end of the show the band are mobbed by the assembled company and it’s pretty clear that they are now officially world famous in Grimsby. Just the rest of the planet to go then and that shouldn’t be too hard. 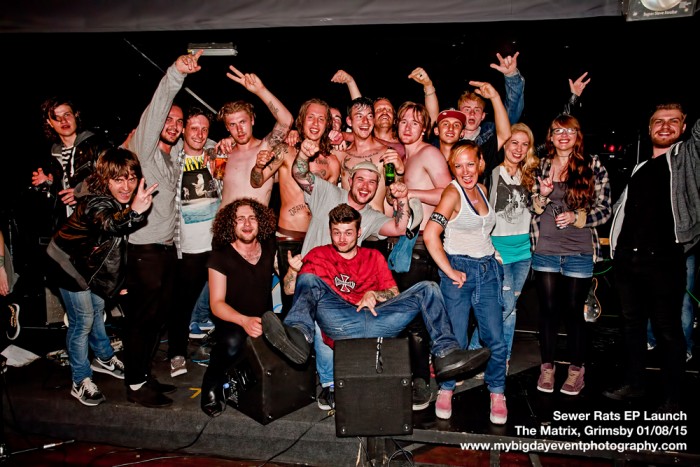 When I roll in at home with the remains of my chips and half a can of Vimto I’m just in time to catch the last half of The Meat Loaf Story on some channel I’ve never heard of before. Talk about serendipity. I switch on just as our hero, suffering one of his periodic outbreaks of bankruptcy, is laid across his bed with his two children, Vegetable Roll and Nut Cutlet.

“The trouble is,” he says to the adorable golden haired moppet angels, “nobody likes Daddy’s music.”

So there you go. I’m not going to take notes at gigs anymore. I’m just going to submit the first thing I hear on telly when I get home. Sorted.

Sewer Rats. I like them. You will too. They’re loud.