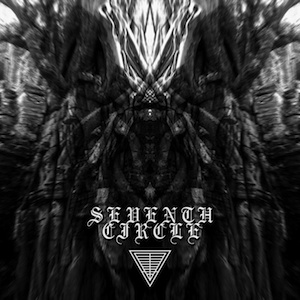 There are plenty of influences at work on this short (12 minute), seven track EP.  From the start, there is complete blind fury driving these tracks. The rage is believable throughout a maelstrom of styles that rage from hardcore, black metal, doom metal, death metal, grind and crust.

It takes less than thirty seconds of opener, Sin (Curse of Life), for the fury to begin. Harsh vocals and pounding drums range in tempo from breakneck hardcore to a doomier ending. Some of the guttural vocals on the opener, and second track; Blind Slaves, are reminiscent of the legendary Carcass frontman, Jeff Walker. Blind Slaves also has a slow, chug of a riff that is unrelenting, monotonous and bludgeoning. Never Enough follows in the same vein as Blind Slaves.

Haunted has a vile guitar tone that is sinister and menacing throughout. The whole track is built around this riff. The vocals are completely and utterly vicious. The blast beats on the drum and the crushing tone of the guitar towards the end of the track end in feedback, which segues into the bass intro for Black Sun.

Black Sun has a glorious open guitar riff before the track funnels tightly towards a battering ram of a track that moves very quickly into the next track – Exile. Exile, again like the other tracks here is punishing, but the band change up a little by polishing the track off with a solo. Closer, Extinct, opens with an extremly harsh scream before another slab of crust infested punk.

If you are a fan of Nails, Hessian or Black Breath, this EP will serve you well. The array of genres sampled in the bastardised mix is something special. The tempo changes and the precision of the guitar work are excellent. The production is very DIY but this helps the band create an identity for themselves. More exciting heavy music coming out of Belgium; it would be great to see Seventh Circle on British shores.