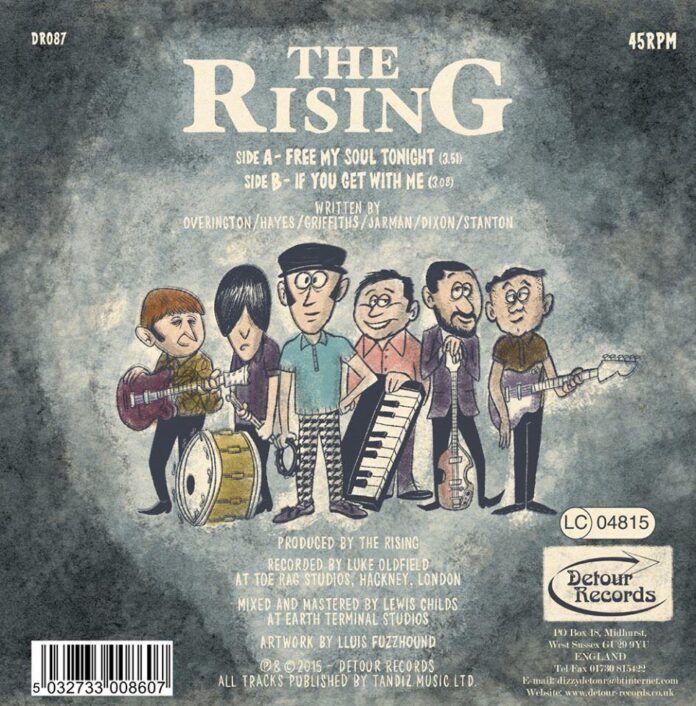 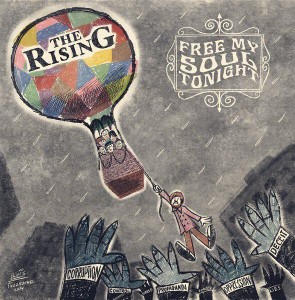 Southampton 60s-inspired guitar band The Rising signed to Detour Records last year thanks in part to a Louder Than War review. On January 26th 2015 they’ll be releasing a new double A side single on good old fashioned seven inch black vinyl.  A traditional format for a traditionalist band. Ged Babey scored an advance copy – see what he thinks about it below.

I would love to hear this on the radio. It would be like when a real classic old song which you haven’t heard for ages comes on unexpectedly and you get that urge to dance  around the kitchen singing along to the chorus … it immediately brightens your day.

Both sides of the Rising’s single are gloriously retro, thoroughly vintage but totally brand new and right here, right now.

Like the Mini or the Ben Sherman, you can’t improve or update a 60s design classic, and The Rising intuitively know it.

The band are from Southampton and the launch gig for this single, at the legendary Joiners on Saturday January 26th, is completely sold out.  They are local heroes but a down to earth bunch of herberts led by a cocksure lead-singer called Tommy Overington who I interviewed for Louder Than War in March last year.  Since then there’s been a few lineup changes. In addition to Jimmy Hayes (lead guitar) Ryan Griffiths (rhythm guitar) Barrie Jarman  (bass) and Matt Stanton (drums) they have enlisted Liam Dixon on keyboards from Neville Staples touring band.

Detour Records (a quality homegrown label serving the scooterist community) put them in Toe Rag studios to record some new material and this is the result.

Coming as they do from the Great British Lineage of Pop & Rock; The Beatles, Kinks, Small Faces, Sex Pistols, Oasis … there was only one format it could be released on. Seven inches of black vinyl. An artifact from a bygone era, but very much in vogue we’re told. Of course there’s a download as well so you can stick it on your iPod.

Tommy’s Facebook posts, from the planning to the recording, the session, the production, pressing and imminent release, were so bursting with excitement, pride and disbelief that they were a joy to read. This single means a lot. It’s the latest in a list of modest achievements by a bunch of working class blokes who’ve invested all their spare time and money in making some classic-sounding music.

I hate to think of some professional rock critic getting a review copy amongst a pile of a hundred other freebies and dismissing it as “Gallaghers-style Mod from the provinces”, which, although true at face value, doesn’t take into account the sheer blood, sweat and tears that have gone into this. And The Rising actually sound less and less like Oasis the more you listen to them. In fact they look like becoming worthy successors to the legendary Southampton Mod / Freakbeat band Fleur De Lys of Circles fame. 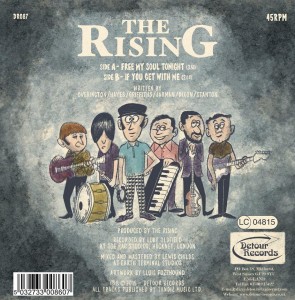 It is a great single and worthy of playlisting on BBC Radio 6-Music, if they really do listen to stuff which is not fed to them by pluggers and PR companies.

I spoke to Liam Dixon, telling him he seems to have added a real touch of class to the band with his Hammond. I asked was he pleased with how the single sounds and how was it working with The Rising compared to Neville Staples?

“Yeah, buzzin’. I’m really pleased with the ‘dirty’ Hammond intro. The guys at Toe Rag did a great job with that. It’s also nice to hear it played on the beat as opposed to the off beat I’ve been accustomed to. I’m still doing a bit with Nev, he’s a great guy, a friend and amazing to tour with. The Rising lads are quality to work with too  and have been great in welcoming me into their group. All are top guys and very creative at the mo. I must admit it’s very new territory for me, coming from playing big gigs, some all over the world, with an established name artist to be playing with an originals band. It’s defo two different worlds.

“The creative process is also a joy. Coming up with ideas together is a real buzz! At the end of the day I just wanna scream the balls out of my Hammond!! Although be prepared for some new sounds coming from me in the future.”

The songs themselves show a definite progression from the band’s earlier work with Free My Soul Tonight having a dash of early Charlatans about it (obviously the Hammond) and a Stonesy touch of guitar, whilst the other track nicks a motif from Shakin’ All Over (as did the Scientists Swampland). But despite all the trainspotters-are-us influences, this is a superb retro-modern classic.

Going against the grain (a pop single must make an impact in the first ten or twenty seconds) the band take their time getting started and try and capture the ambience of Toe Rag with humming amps and semaphore dot-dashes of guitar whilst the song slowly revs up.

Lyrically Free My Soul Tonight covers a lot of ground. There’s an underlying theme of fuck the bad times, let’s have some good times. “The suits keep a-lying, the TV keeps trying, getting us to fight and fear” is a nice couplet referring directly to politicians and the media’s complicit “divide and conquer” tactics (see Benefits Street / Immigration Street). But The Risings answer is “but I’m gonna leave all this behind, I’m gonna free my soul tonight”.  It’s an archetypical Mod anthem in a way; a living for the weekend song.

If You Get With Me, on the other hand, is a Louie Louie style retro dance-floor filler. A three-minute chat-up line you can cut a rug to. Part Beatles in Hamburg, part Medway Punk, and one hundred per cent Rising.

The band may be portrayed in cartoon form on the sleeve of the single, but that’s what separates them from vain pretty-boy hipsters taking themselves too seriously, this is a band who takes the music seriously, but everything else that goes with it is about having a laugh and the maximum amount of fun possible.

Here’s the video, filmed at The Joiners of course by a team lead by The Reaktors drummer Steve Hogg.

The Rising play the Joiners on Saturday 24th January (it’s sold out, but there may be a few last minute returned / extra tickets available from the venue on the night.)

Get the single from iTunes or the vinyl from Detour.