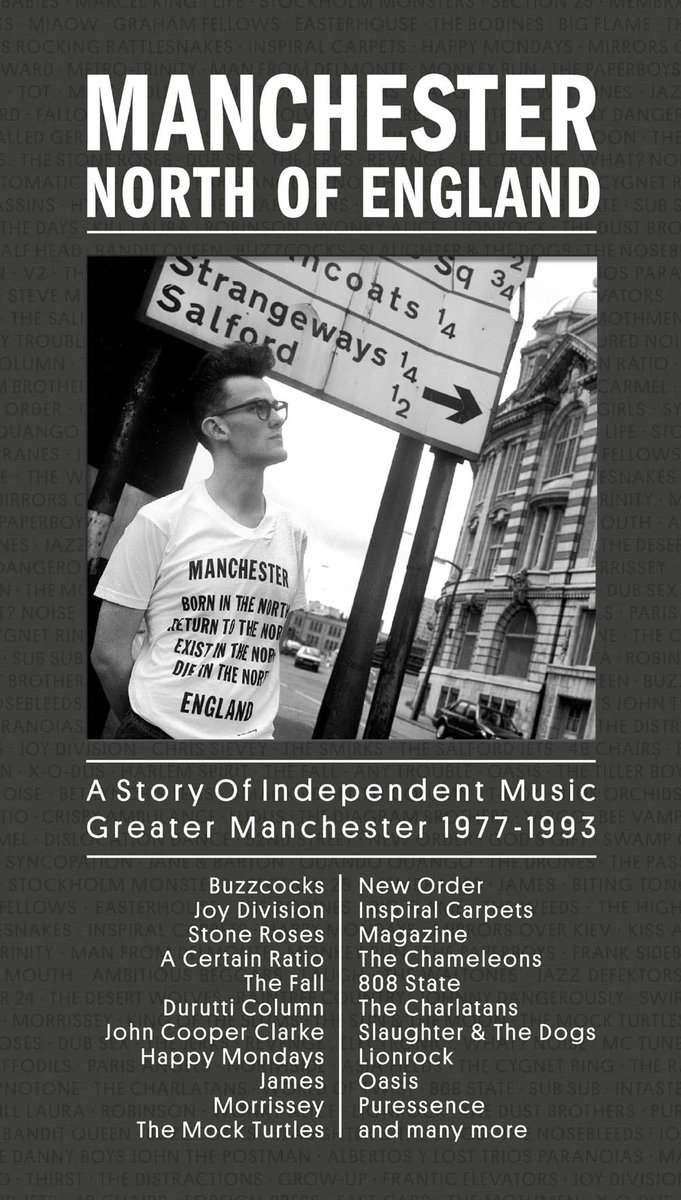 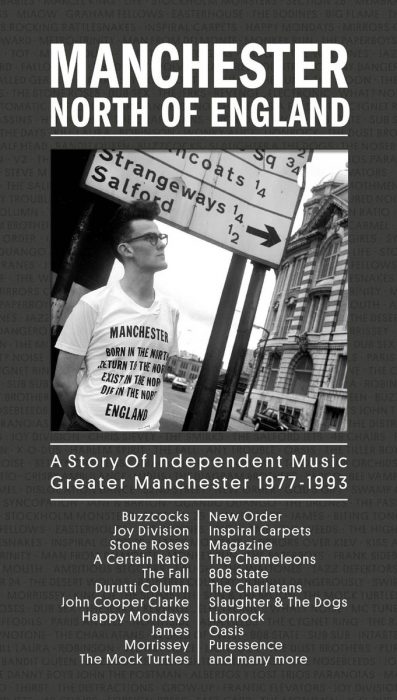 Trying to make sense of Manchester’s massive musical history is like trying to work out the bus timetable at Piccadilly Gardens – there’s lots of choice, plenty of stopping and starting… sometimes it even gets a bit ugly…. and sometimes magic.

But there to put us on route – and in the most interesting way – are Cherry Red Records, with their release of Manchester North Of England: A Story Of Independent Music Greater Manchester 1977-1993 seven CD box set on Friday 28th July.

The launch of this exhaustively compiled collection shows how Greater Manchester evolved to become an indie music hotspot, all the way from early punk to the ‘Madchester’ era, taking in bands not just from the centre, but groups like The Chameleons from Middleton, Inca Babies formed in Hulme, The Waltones from the Whalley Range area and many more.

There are plenty of twists and bumps along the way – many of these being wonderfully obscure bands you may not have heard otherwise – but often had more an impact at the time than people may first think.

From group names as bizarre as ‘Bet Lynch’s Legs’ and ‘The Hamsters’ to track titles like ‘Spike Milligan’s Tape Recorder’ from The Membranes, ‘I’m In Love With The Girl On The Manchester Virgin Megastore Checkout Desk’ from The Freshies and ‘D’You Think I Look Like Elvis Presley’ by no other than Big Ed & His Rocking Rattlesnakes.

The box set brings to light many of Greater Manchester’s hidden gems, as well as the work and influence of the region’s more iconic acts including Joy Division, The Fall, New Order, James, Happy Mondays, The Stone Roses, Morrissey, John Cooper Clarke, 808 State, A Certain Ratio, Durutti Column, The Charlatans – all the way up to Oasis. To see these artists within a kind of chronology and amongst other musicians adds to the interest.

Launch day was marked with an event at the Piccadilly Records store on Manchester’s Oldham Street featuring a ‘Q&A’ session with compiler John Reed, sleeve-note writer and author Mick Middles, bass player of The Membranes and Louder Than War magazine chief editor John Robb and Graham Lambert of The Inspiral Carpets.

Conversation lasted for well over an hour and covered themes including the question of whether there was a difference between North and South Manchester sound, the importance of alternative media such as fanzines like City Fun, venues of times gone by– including the Boardwalk and The International (significantly associated with The Stone Roses) – and an audience member even shared how she had bunked off school, aged just 15, to photograph bands practising at The International 2.

Mick Middles, who was also a key journalist at the time, adds further insight in his sleeve notes for the set and exploration of other infamous venues:
“The Electric Circus, a desolate ex-bingo hall set in a post-apocalyptic vision in Collyhurst, offered the ultimate in essential edge, if you made it past the bricks and bottles hurled by local youths, over-zealous policing and the prevailing air of mean spirited conservatism.”

There is also a foreword from broadcaster Mark Radcliffe who praises the 7 CD collection and says:
“What this treasure trove displays is the extraordinary amount of creative outpouring that oozed from these sullen streets. Manchester music manages to combine euphoria and melancholy. It is both uplifting and mournful at the same time.”

The box set is a historical artefact in itself, following the progress of Manchester’s independent scene all the way from the punkishness of Buzzcocks’ Spiral Scratch EP to the brit-pop esque beginnings of Oasis.

It’s not just a load of young blokes with guitars, either. From the haunting effect of Nico & The Invisible Girls on the track ‘Procession’ to the mashed-up electronics of ‘MC Tunes vs 808 State’, this is a trip through multiple genres and eras of Greater Manchester music.

It includes sounds from many backgrounds too – ‘Dem A Sus (In The Moss)’ by Harlem Spirit a rousing song based in and around 1980s Moss Side for example, protesting the stop and search laws at the time which often unfairly implicated people of ethnic minorities.

Compiled by the team behind Cherry Red Records who take pride in carefully-curated indie music(with many other box sets like ‘Scared To Get Happy’ and ‘Millions Like Us’), the 143 track long Manchester release has been a labour of love in conjunction with Manchester District Music Archive.
According to John Robb:

“Although music is always thrilling when we are in fast forward, sometimes it’s great to visit the high decibel museum and find out where this stuff came from. As ever it’s the nooks and crannies that can be far more fascinating than the famous… and leave clues to what was really going on.”

Presented in a deluxe box set with sleeve notes written by Mick Middles, who has penned multiple books himself including on Ian Curtis and Elbow, it is an intense experience inviting people to consider how music has involved here and goes far beyond the typical associations of Factory Records alone.

Not necessarily a smooth ride, part of the appeal and interest in the box set lies in its variety of sound and musical experimentation. Particularly notable is the Britpop flavours of Kill Laura, Miaow’s Manchester-inspired ‘Belle Vue’, the wry ‘In Salford The Sun Doesn’t shine’ by Jean Go Solo and the John Peel Radio Session version of ‘Time to Lose It’ by Laugh.

A formative period of musical history which had an impact nation-wide, in the form of a box set. One to keep your neighbours up to – you’ve got the excuse that it’s educational.