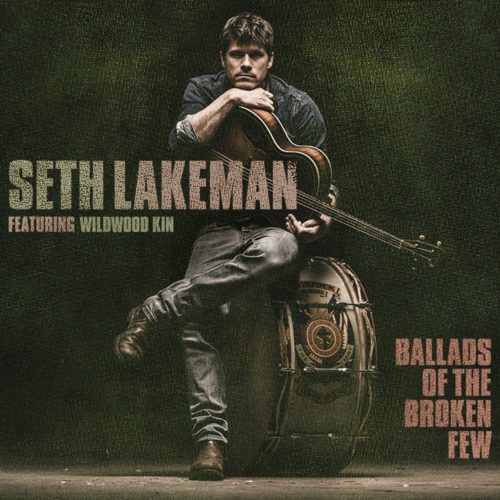 BALLADS OF THE BROKEN FEW

Seth Lakeman’s eighth album on  from his 2002 debut ‘The Punch Bowl’ sees him taking a departure from the norm; a shift from the tried, the  trusted and the expected, to  give himself and devoted fans from The Mire a shot in the arm.

Bringing on board the all girl trio Wildwood Kin who’ve played as a tour support, the usual routine of crafting songs for and on  his  beloved Dartmoor has taken a back seat.  This time Seth finds himself taking  to the road for inspiration in the tradition of the old bluesmen and balladeers.  In the past the studio has helped him turn out more commercial attempts but as with his most recent two albums, he’s continued the experiment with recording in locations which offer a built in ambience, atmosphere and inspiration. In this instance it’s the  great hall of a Jacobean Manor House, all captured by Ethan Johns who’s also added some dirty electric guitar to add to a natural and unrefined feel.

If the last two records – 2011’s ‘Tales From The Barrel House’ and 2014’s ‘Word Of Mouth’ – took a more organic and rustic approach, ‘Ballads’ sees Seth stripping back the stripped back and moving into  areas which in the past he’s hinted at but has now committed to  a full baptism.

The stark and sombre interpretations take the form of seven original tracks and four  covers  –  ‘Stranger’ and ‘The Willow Tree’ taken from the Full English collection – ‘Pulling Hard Against The Stream’ a 19th Century moralistic song and ‘Anna Lee’ by Laurelyn Dossett, the latter an ill-fated country blues cautionary tale straight  from the rocking chair on the front porch. Yet within a second of the needle hitting the groove, there’s a familiar sweep of fiddle, maybe a bit more bluesy than usual, followed by the first cooing of Wildwood Kin and a less than familiar feel yet giving a hint at the warmth and soul which their contribution is going to add. Opener, ‘Willow Tree’ follows  something akin to a  ‘Barrel House’ template, a hint of a link to the past yet with an indication that there’s a change of  focus.

Lakeman watchers will recognise  ‘Whenever I’m Home’ delving into  ‘Portrait Of My Wife’ territory  all personal allusions  and feelings  and played solo accompanied by a rich  viola/fiddle and a subtle contribution from the Kin. It’s the subtlety and restraint that remains as the overarching feature of the album.

Ultimately ‘Ballads’ is Seth Lakeman’s most  understated and darkest piece of work, inspired and influenced by a strong blues and soul based approach. An album which proves a curve ball in the Lakeman catalogue  with less of the gung-ho,  hoe down folk style and ending up with  mature and measured.  These are deep brooding songs which contemplate scrutinise dark and intimate places.

Watch a live performance of the title track from the album here:

The Seth Lakeman   website can be found  at : https://www.sethlakeman.co.uk/

He is  also on Facebook  and tweets  as @SethLakemanNews

He also has his own dedicated YouTube channel here