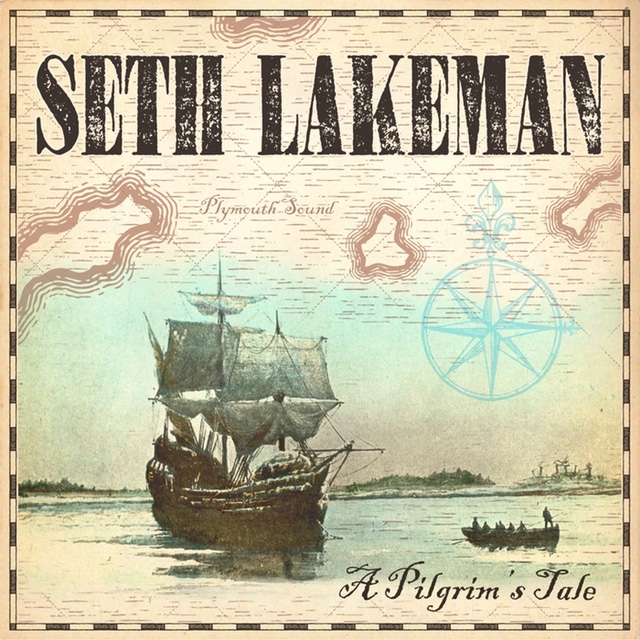 Released February 7 2020 on all formats.

Paul Clarke fought the punk wars to banish concept albums but finds himself rather liking Seth Lakeman’s contemporary and bold take on the format.

The punk wars were fought in part to banish self-indulgent concept albums (I’m talking about you Yes), but folk singer Seth Lakeman has decided to bring it back as 2020 marks four centuries since The Mayflower took the Pilgrim Fathers off to the New World.

A Pilgrim’s Tale is a proper concept album complete with a silky narration by former Dr Who Paul McGann using Plymouth Theatre Royal’s Nick Stimson’s script to link the songs. Lakeman has recruited his old man Geoff and sister in law Cara Dillon to add their vocal talents to what is an ambitious and surprisingly uptempo record.

This is a personal project for Lakeman who lives minutes from the quay in Plymouth where the Pilgrims, including 35 members of a radical Puritan church known as the Separatists, set out on a hazardous journey to escape religious oppression, and he has played in every sailors’ pub in the naval city’s Elizabethan quarter. Once there the Pilgrims had to reach an accommodation with the Wampanaog people who didn’t realise they were sowing the seeds of their own destruction as settlers poured through this gateway into what became America.

All the songs are told from the perspective of key figures in this saga, and ‘Watch Out’ features Lakeman’s distinctive violin playing, and a delicate backing vocal from Dillion, as a Wampanoag girl has a premonition of the genocide to come. ‘Pilgrim Brethren’ is a jig as the Separatists prepare themselves for the voyage, whilst ‘Westward Bound’ is The Mayflower’s Captain Christopher Jones mournfully contemplating the privations and danger ahead, with Lakeman in fine voice.

Lakeman has also recruited multi-instrumentalist Benji Kirkpatrick and long-time collaborator Ben Nicholls on upright bass who play beautifully on the jaunty sea shanty ‘Sailing Times’ as the crew sing their fears of never seeing home again as they scamper round the rigging. This may be only album in history to feature a song about a massive piece of ironmongery, but ‘The Great Iron Screw’, driven by Lakeman’s sawing strings, is pivotal to the story as it kept The Mayflower afloat.

The stand-out track is ‘Saints and Strangers’ revealing all the compromises both sides had to make to stay alive with an absolutely delicious co-lead vocal sung by Dillion, who remains one of the great contemporary folk singers. This is a balanced album historically, and on this track you can’t help but reflect on the irony of Europeans fleeing persecution who bring their own form of oppression to the colony at the point of a musket.

The only real misstep is ‘The Digging Song’, which seems to suggest the Wampanoag and the settlers who stole their land to found the Pilgrim Plantation ended up being best buddies, rather than uneasy bedfellows driven by expediency. Oh, and we could have done with more Dillon as her singing would have added texture to some of the tunes.

As a veteran of the punk wars I am prepared to concede that maybe concept albums aren’t inherently crap if they have this sort of sonic ambition, and are brave enough to take a balanced look at a moment in history that really did change the world. It helps that is played with the sort of verve and virtuosity that folk fans have come to expect from Seth Lakeman and his band of collaborators.