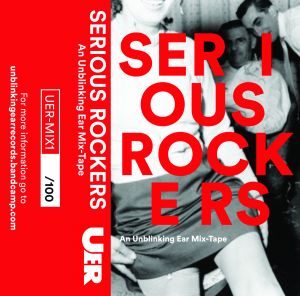 Paul Bruno, WFMU DJ and host of long-running podcast The Unblinking Ear, has already established himself as a highly tuned in and on point presence over the airwaves, and his enterprising, industrious nature with starting his own label is already reaping rewards with the Serious Rockers compilation.

Gracing the 28 track tape are a few Gonerfest faves and familiar names of new garage (whatever that means) like Heavy Times, Golden Pelicans, The Hussy and Life Stinks, as well as rising stars like Literature and Lame Drivers, scattered alongside completely unheard of jewels like Big Quiet and Snowmans Of Love. The Serious Rockers experience reminds me of the diverse independent spirit of John Robb’s mid-80s Death To Trad Rock collection of post-punk era-defining classics, perhaps due in part to the seasoned music-loving lifer overseeing the project, as well as the sweeping excitement of freshly flowering talent piped through its many distinctive songs.

Serious Rockers is rife with vibrantly catchy guitar rock, from glossy college radio jangle pop, to the tasty big harmonies of 1960s British Invasion style, to the agitated rattle of scuffed-up 2 minute punk bombs. The tape began as an alternative nest egg to the usual Kickstarter funding platform, and bands were invited to contribute exclusive songs to be sold digitally via Bandcamp. It was later decided the mix should also be represented as a physical cassette release to celebrate full circle the immutable joys of lifelong music fandom, and is limited to a run of just 100 copies.

The results of this venture are remarkably first-rate and always interesting, making it pretty difficult to highlight particular favorites without exhaustively acknowledging the entire tracklist, song by song. Again, I feel like this speaks for the sure-footed wisdom and uniformly fine taste of The Unblinking Ear overlord, Paul Bruno. This is not some hipper-than-thou vanity scheme, this is someone who genuinely knows what he’s doing, and he’s doing it because “why not?” There is nothing skippable on the mix, but there are songs I connected to instantly, songs that stimulated my brain chemistry in mysterious ways and became strangely heart-stirring little romantic obsessions. The first of these is the seductive bedroom gloom of Pitt’s Comb by My Teenage Stride, a group of malcontented Brooklynites with Anglophilic inspirations established in 2003 and led by Jedediah Smith.

I also became partial to the snotty yet tuneful ’77 pop-punk sensibilities of Austin garage supergroup Sweet Talk midway through the mix (featuring members of Mind Spiders, Wiccans, and Video), as well as Creepazoid from San Francisco foursome Life Stinks, which summons forth the endearing teenage sneer of The Zeros. There are more than enough worthy cuts here to whet the appetites of serious rockers everywhere, and I’m sure Unblinking Ear will retain its leading edge in bringing us “the clatter that matters” with many more quality releases to come (there is already a Big Quiet 7″ in the works).

Serious Rockers can be streamed in full and purchased digitally or as a limited edition cassette tape through the Unblinking Ear Records Bandcamp page. The record release show at Pine Box Rock Shop in Brooklyn is on Saturday, February 7th, and features contributing mix-tape artists Invisible Days, Lame Drivers, Big Quiet, Snowmans of Love, and Scupper.

Listen to The Unblinking Ear podcast here or follow Paul Bruno on Twitter if you enjoy heavy snarkasm and value the opinions of someone who is pretty much right about everything most of the time.