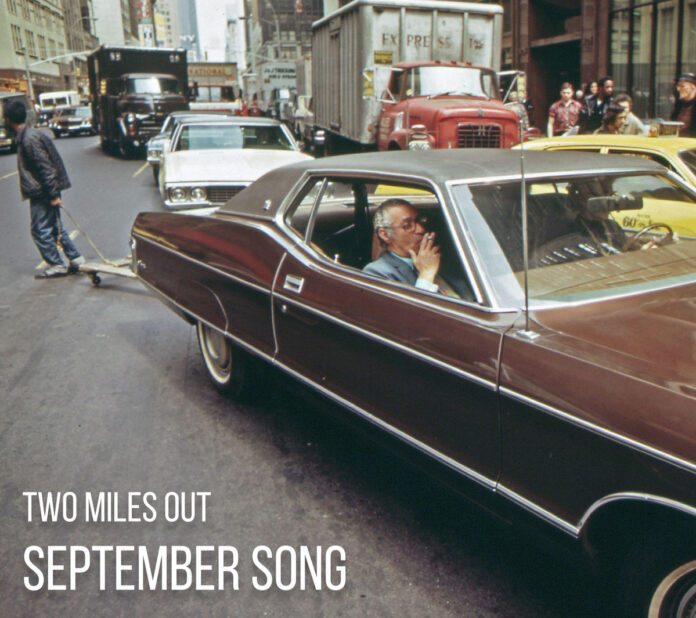 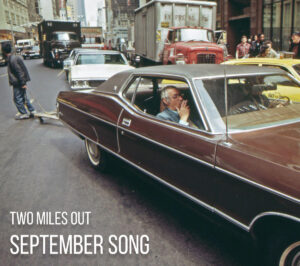 Bristol based duo, John Douglass and Steve Hogg, September Song have just released their second album, Two Miles Out on their own label, Sons Of Art

The album was started during the summer of 2018 and completed in the summer of 2021; straddling Brexit, Trump, and the pandemic. Douglass explains, “Two Miles Out started off reflecting on global events, but ended up introspective, maybe the best way to solve the world’s problems is to start at home, ‘physician heal thyself’? As a songwriter I used to make myself crazy in order to write, now I keep myself sane (ish) by writing”.

The album starts with a sax (Hill Street Blues?) and the smooth Eleanor Knew. This sets the tone for the record. From the off this probably isn’t the kind of record you’d generally find getting reviewed by Louder Than War! Musically it’s more akin to the kind of thing you may once of heard on Terry Wogan, or occasionally have seen on Top Of The Pops from the 1970’s, repeated on BBC4. You can imagine it now, white suits and dodgy CSO effects. Please don’t let that put you off though, I’m doing the duo a disservice. I’ve really enjoyed listening to this album, and it’s predecessor, The Arrogance Of Time over recent weeks. Musically (and in maturity) both John and Steve are ‘men of a certain age’ with extremely varied but cultured palates; their albums are the sounds of these collections being digested, shaken and stirred, then served out on a spanking new platter.

Douglass and Hogg have worked together in various guises over almost 40 years, from the 80’s Kid Sinister; the 90’s bands Wushcatte and Widescreen (the latter briefly signed to Kitchenware Records) and then noughties Augustine which also featured ex-members of The Slits, The Pop Group, and The Blue Aeroplanes. I guess what I’m trying to say is they’ve both been around a bit and paid their musical dues. The partnership works well, Douglass taking the lead on the songs and arrangements whilst Hogg handles most of the vocal duties, which are lush and harmonious. Their work is engineered and produced by Mark Aubrey, himself with over 30 years’ experience,  having worked with artists as varied as Starsailor, So Solid Crew, Bloc Party and Kylie, cutting his teeth at Konk (home of the Kinks, and EMI before going independent).

I can’t decide whether you’d consider the sound of it ‘arty’, ‘art-house’ or ‘filmic’… but whatever it’s got a finesse to it. It’s steeped in (or possibly under) the influences of, arguably, some of the most respected artists and songwriters of the 20th Century, for example Smile era Beach Boys harmonies on Unspoken; Harry Nilsson, country church feel on Kings And Queens; Kirsty MacColl on No More and even Elton John meets Simon & Garfunkel on Mother Forgive Me. As Douglass admits, paraphrasing Igor Stravinsky, “A good composer does not imitate; he steals, and that’s what I will tell the judge!” (Maybe that’s one Ed Sheeran should have considered in court)

The high point for me comes just 3 songs in, with the lead single New York City Getaway. It’s a jazzy piece with Hogg’s vocals floating effortlessly over the instrumentation, backed by the vocal talents of Ruth Ayika Ankrah, Michaela Fedeczko and Sally Larkin. There’s a warm nostalgic feel to it that transports you elsewhere without the need for you leaving your sofa.

As we head into spring, September Song’s second album is one which will add some sophistication as you enjoy in the warmer, brighter evenings to come.

For more on the band visit Facebook or their home page 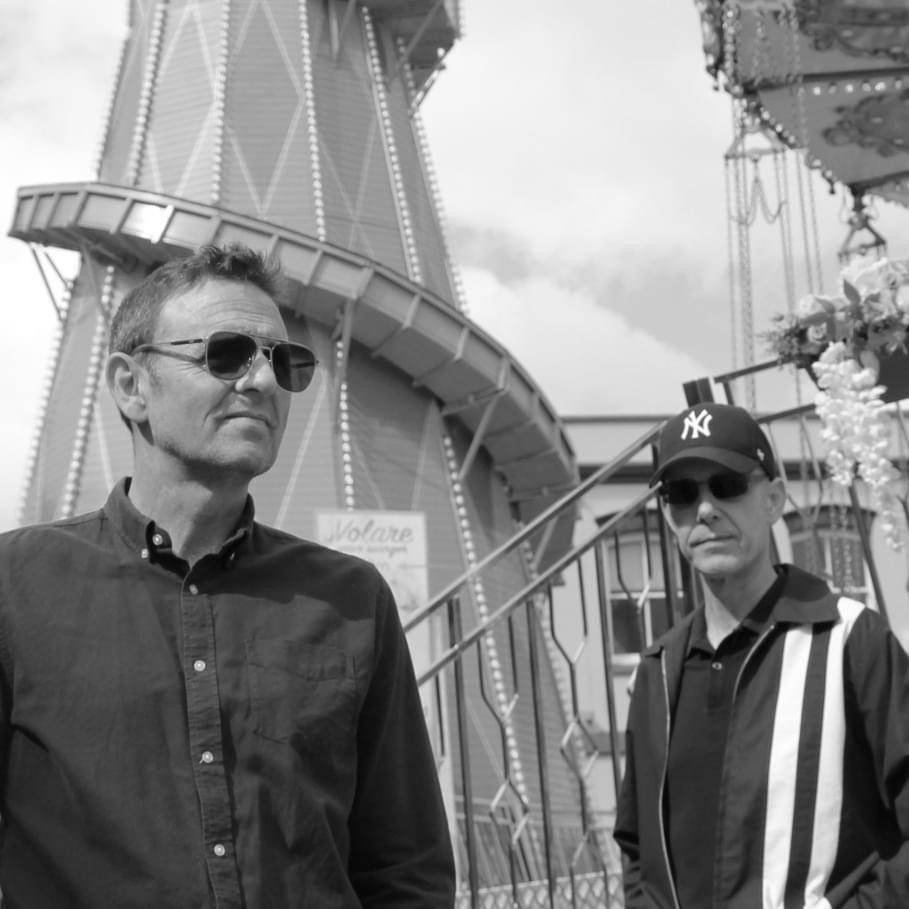