Louder than war’s Ioan Humphreys was in Neath, South Wales to experience a night of death metal and grindcore so you don’t have to.

I have always had a soft spot for death metal. It’s not for everyone I know, but there is something cathartic about putting on a Cannibal Corpse or Carcass song after a run in with the boss and having a right old head bang. I’m also (if not a bit more) partial to a nice slice of grindcore. I often find myself listening to AxCx actually out of pleasure!? What that says about me I don’t know. But, again, it seems to have a cathartic/soothing effect after a shitty day. Or even a good day! I need help…

What has also come with death metal and grindcore over the years is the evolution of the band name and its logo design. Often hilariously bad taste band names have merged with indecipherable band logos that on times can look like an unlit bonfire. My LTW colleague Phil Newall has collected some of the hilarious and downright offensive names that surround these genres here and here. It’s at times disturbing and hilarious, yet I’m sure the tongues are firmly in cheeks when these names are penned. By the way, ‘Aborted Hitler Cock’ and ‘Bathtub Shitter’ are actually pretty good bands!

I have already witnessed firsthand the glorious and brutal spectacle that is Sodomized Cadaver. They are the second to final band on tonight (four bands in all). What singles this band out for me is the DIY promotion ethic that this band, and in particular their drummer, Gavin Davies has. Having followed SC and Gavin on Facebook for the last six month, you get to realise that the guy has his own booking agency (Eradication Booking) and puts on seemingly endless gigs up and down Wales and England. These gigs are often free entry so who knows who benefits financially? The bands? Doubt it. The Venues? Beer sales tick? The fans? Absobloodylutely! How he does it though I don’t know, but good on him anyway.

Anyway, onto tonight and first on we have Annunciation from London. 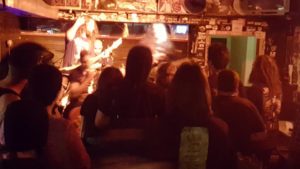 They are a five piece and cant all fit on this small stage in The Duke so the bassist and vocalist have the floor. Immediately what you get with this lot is their classic death metal roots. They have a big sound. Big guitar solos and big songs. I think the shortest song was about three minutes long. They are lengthy and epic and remind me of Deicide or Monstrosity in their scope. One of the track names I catch is called “Genocidal Apathy”. Yet again, the death metal scene is way on top of their (depressing) subject matter. 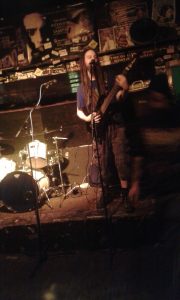 He is a one man band with guitar, drum machine, effects and pre-recorded sounds. And the pre-recorded sounds feature heavily from pornographic films and mainstream films. But mostly from pornographic films. I like it. The combination of the live guitar, growling vocals and 100mph beats reminds one of the visceral bombardment that is Ministry. Except, tonight, ‘Anal floss…’ could have done with a bit more volume to be honest. The sounds, combined with the guitar are spot on and faultless. Oh and he throws in a bit of Run DMC for good measure! Nice! This act is obviously been honed to perfection. Just a bit louder next time please!

So next up we have the mighty and already mentioned Sodomized Cadaver. And now with added bassist!

Surely he is there to add to the loud and monstrous sound that SC creates? Well he is. ‘Rapid Gutteral Disfigurement’ is launched into early on and it is loud and tight. The shift in vocals, guitar and drums are all beautifully choreographed in a disgustingly beautiful display of anger, revulsion and confusion. ’Eternal 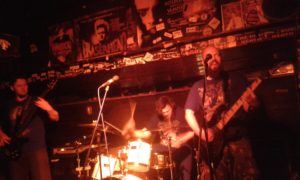 Decay’ follows quickly and again the song is perfectly crafted and obviously practiced to a tee. Their lead singer yet again entertains the crowd with stories about the valleys ending up with “it’s a welsh thing”.

Then suddenly his eyes roll up into his head like you have never seen before and the guitar gymnastics and riffs take over and you are suddenly thrown into the Sodomized Cadaver world of obliteration, endless tight riffs and gentle ingratiating Welsh isms. Absolutely scary shit, but bloody entertaining to boot. Good stuff.

Finally we have the gloriously named headliners SEMEN from Mexico. They have been together in various guises for around 13 years now and they seem to have perfected their own brand of noise, speed and brutality to a tee. 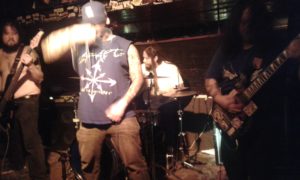 I have already met two of the band outside having a cigarette. I have to say, 1. This is the first time I have ever met some Mexicans. And 2. What a thoroughly lovely pair of blokes! We chatted for ages about the gig and where they were staying for the next few days. Good stuff. However, once they take the stage, this four piece mean business and are in a league of their own.  Their sound is big and heavy. They are fast as fuck and brutal in their approach. Their songs are relatively short, yet the brutality and guttural force of the vocals and music are breathtaking in their force. They really are a band to be witnessed and experienced. 13 years of experience have honed this Mexican four piece into a brutal machine that has to be seen to be believed.

What a night and what a line-up. For a Wednesday night, in a small Welsh town and a dingy metal head pub, the talent is very impressive. Wonders never fail. And neither do Eradication Booking. Bloody great.