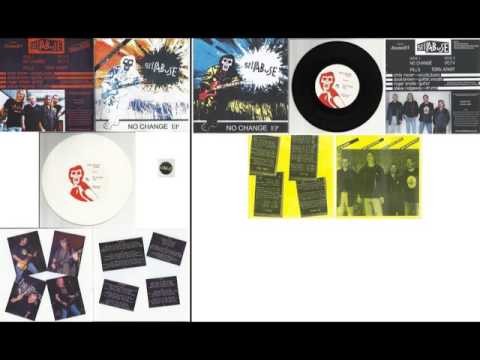 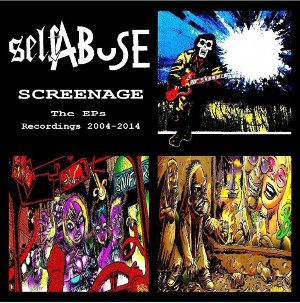 Louder Than War’s Nathan Brown listens to Self Abuse’s collected output of melodic protest punk since 2004.

Self Abuse hit the streets of Bournemouth in 1982 and by the end of 1984 had split, leaving us with the “(I Didn’t Wanna Be A) Soldier” EP, which had made number 2 in the Indie charts and been played by John Peel on national radio.  20 years later they reformed, coming back a leaner, tighter, more proficient machine and surface sporadically when the fancy takes them.  It is still clearly the same band but older, wiser, better recorded and with more depth in both writing and execution of their songs.  “Screenage” is a CD release of the band’s recordings since they reformed in 2004.  3 EPs are included with bonus unreleased tracks making a total of 20 tracks: “No Change” from 2004, “Celebrity Death Squad” from 2007 and this year’s “Burn Trash City” which is also available on vinyl 7″.

Self Abuse play what you might describe as mid-paced melodic punk rock with fairly tuneful vocals at times emulating Steve Drewett of the Newtown Neurotics with a little touch of Chron Gen…actually singing but still with attitude – and protest content to justify the attitude.  There’s also something of D.O.A. in Self Abuse’s rocky approach to punk.  At times the melodic nature of their sound veers a little towards indie bringing to mind bands such as Drive, Broccoli or Senseless Things (I can’t even tell you why, its just does) but then there are also some great breaks courtesy of guitarist Jarvis straight out of the Johnny Thunders songbook, floating over other guitarist Dave’s Marshall-driven Les Paul.    Other reference points that might help you to place this band include Demob (The ones who did “No Room For You” not the dance act) and maybe even a hint of the Pistols on some of the guitar riffs.  Of course, Self Abuse used to play their own take on a Pistols number….”Bournemouth was a gas”.  The band’s bass player and main vocalist, Andy Nazer, may take me to task for bringing up this somewhat unpolitically correct cover!  He’s a local institution, who must have been to every local gig in the past 3 decades and he’s still wearing the same black and white stripey T-shirt.  Andy has an amazing knack of always being upbeat and positive (possibly the most positive man in the world of punk) so perhaps I may just get away with it.  Original drummer Steve Ridgeway was succeeded by the extremely able (and equally positive) Dom from local punks Demonic Upchucks in 2007.

Some of the songs are re-recordings of original ’80s tunes so you have to give them the benefit of the doubt when they serve up a line like “Need a pill for rock’n’roll. Need a pill cos I’m on the dole” or sing about 4 minute warnings and nuclear war which seem almost quaint in these modern post-cold war times, notwithstanding the nuclear powers engaged in conflicts that dominate the headlines.  Still, some of the lyrics apply equally to a different set of threats in our modern age: “Who wants to rule a derelict earth? You can have it for what it’s worth!”

Highlights include “Trash City Burning” and “That’s Progress”, which both deserved to feature in 2 recording sessions, plus “Celebrity Death Squad” with its intro reminiscent of “Calfornia Uber Alles” and a dead catchy chorus.  A real stand out track is the previously unreleased “Lord of the Flies”.  Not only a great song with tireless vocals that build up to an angry crescendo and another Thunders influenced guitar break but also contains a hilarious line about the New World Order: “It’s hard to follow leaders with a mental age of 3”.  Another song deserving its second take.  A pleasant bonus is their cover of  “World In Action” by Bournemouth anarcho-punk band Mad Are Sane.  On the verse it sounds more like Mad Are Sane than Self Abuse, although they reveal their true identity when they hit the chorus. The last track on this CD, “Screenage”, is a play on words –  commenting on the fact that today’s teenagers don’t venture from their computers or tablets for long enough to see what is going on in the world around them.  Its a sad sign of the times when the older generation are complaining that teenagers aren’t causing enough trouble!

A great value release clocking in at just under an hour and available direct from the band at their website or Facebook site.  If this review gets posted in time, check them our at this year’s Rebellion festival!  They put in a solid performance at their warm up gig in Bournemouth in July.

Another punk review by Nathan Brown. You can read more of his ill-informed opinions on his Louder Than War author’s archive here.