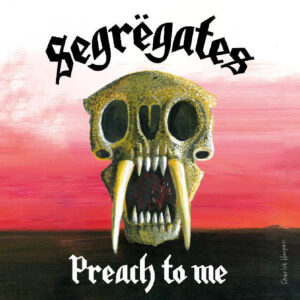 Segrëgates: Preach To Me – Video Premiere from new Motörpunk band

Not suitable for God-botherers and lovers of outrage – Exclusive premiere of not-so seasonal video offering from York band who rock loud and hard.

Segrëgates don’t mess about. They call their sound Motörpunk simply because they are a punk band who aspire to be as hard and heavy and inspirational as Motorhead.  They could’ve chosen to be a shitty ‘tribute’ band but their way of showing respect to the spirit of Lemmy & co is to write their own songs and take the Motorhead sound in slightly new directions

Preach To Me is ‘ a direct assault on everything to do with religion. It proudly and unashamedly shows that there is only one true religion in this broken world, and that is the religion of rock’n’roll.’

Now managed by Snakerattler and York promoter Dan Gott it was his involvement got me interested.  Is the world ready for a surrogate Motorhead? Aren’t they always gonna be in the shadow of their inspiration? I thought, but they sound pretty damn good to me.

The proof will be in their live shows I imagine, but I’m proud, yet kinda wary to present their new video as a LTW Exclusive… Musically it’s immediate and incendiary.  All the elemental greatness is there… But… Here is the video.

Gratuitously rock’n’roll it is sure to offend and upset Christians and those who just love to be offended, depicting as it does some nasty ABH on the Son of God followed by the band getting Our Lord and Saviour pissed on the Demon Alcohol and into the Devils Music.

I must be getting soft in my old age because the first time i saw Jesu splattered with blood from a vicious whack with the butt of a guitar, I was shocked and debated whether LTW premiere the video at all – as basically it will end  up getting ‘banned’ and causing ‘controversy’ in a teacup.  Not that it is as offensive as the way various churches cover-up paedophile priests…

The band formed in 2011 and released their debut album Burstön in 2017 on Cleopatra Records – there are just 9 copies still available here and it’s on Spotify but they seem to have perfected their sound and look set to go up a gear with this release.

Some might say ‘there was only one Motorhead’ and they’d be right, but there’s only one Segregates too and they are making the music they love and are developing their own identity with every gig they play and every song they write.  And you just know they are gonna be a guaranteed force to be reckoned with live.

One day soon, they will make the transition from being ‘the band that wanna be Motorhead’ to ‘the band that are every bit as good as…’ and that day can’t be far off.

I think Lemmy would’ve approved of Segregates, although he’d probably ask for a percentage of any profits, and as far as the subject of Preach to Me is concerned, here are a couple of great quotes from the man on the subject:

“The only interesting thing about religion is how many people it’s slaughtered.”

“If there is a God he hasn’t been paying attention. He should retire and hand over to a younger man, because he’s making a real bollocks of everything.”

Bookmark Segregates social media pages and website and look out for live dates and pre-order the 12 inch single, which isn’t released until 20 March 2020 – but I get the feeling it will sell like proverbial hot cakes laced with the finest dope and soaked in Jack Daniels.