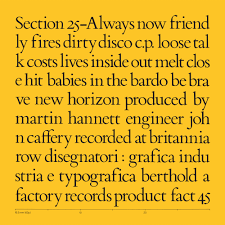 Deluxe vinyl reissue of Section 25’s 1981 debut album, also including singles, live shows, rarities and The Key Of Dreams, the band’s second LP….Ian Canty listens to the sound of one of Factory Records’ secret weapons….

Blackpool’s Section 25 were one of the bands that bore the brunt of the music media’s fascination with Joy Division/New Order, mostly at the expense of everyone else signed to Factory. The “received wisdom” was that all Factory did was sign bands that sounded exactly like the former Stiff Kittens and this was repeated ad infinitum in the weekly inkies. I mean did they expect them to sign Discharge or Blitz up (well actually Blitz did sound a bit like JD/New Order in the latter part of their career….I’m beginning to wish I didn’t start this)? Like most of the acts given this kind of treatment, they sounded a little like those two on occasion, but they were also a lot more besides.

Formed in the last months of 1977 by the Cassidy brothers Larry and Vince, Section 25 (the name referred to the Mental Health Act) made their recording debut three years later with Girls Don’t Count, which was single FAC 18 to give the catalogue number as was all-important in the Factory sphere. This record was produced by Rob Gretton and Ian Curtis, strengthening the ties with the Manchester music massive. Curtis was also credited as co-producing some of their debut LP Always Now, which came out in early 1981 and forms the basis for this 5 LP set. The band’s line up of the time was the Cassidys augmented by Paul Wiggin on guitar, who had replaced Phil Denton in late 1979.

The debut album came wrapped in a typically swish and expensive Peter Saville sleeve and made a decent enough showing in the independent charts. This record remains an intriguing listen and retains a mystique of its own all these years on. Listening reveals a band as in the thrall of PIL as much as their label-mates, but managing to come up with something at the end of it that was peculiarly their own. The reflective Melt Close is delightful and Be Brave is a nice example of detached post punk guitar sheen. Dirty Disco is a mighty groover like the best Public Image and set closer New Horizon fades in slowly, guitar just a ghostly chill giving way to an assertively sparky rhythm. Always Now still carries a bright but oblique sense of purpose, everything here has its place and fits into the bigger picture as a whole.

Disc 2 of this collection rounds up all the early non-album tracks by the band, items that crept out on singles and compilations. Dirty Disco gets a French workout as Je Veux Ton Amour and Girls Don’t Count shines as a great 7″ inch. Knew Noise is still a fabulous thumping alternative dance offering and After Image (also on the Hicks From The Sticks compilation album) has a real punky brio. This disc works as the shadow of Always Now and shows that Section 25’s material had good deal of strength in depth at the time – it was just a matter of them choosing what made sense to include on the LP.

Moving on to Discs 3 & 4, they consist of respectively a live set from a 1980 gig at Groningen in the Netherlands and the second album The Key Of Dreams. The live gig is a well-recorded set, but at times the vocals sound a bit hesitant and the crowd somewhat muted if I were picking faults. Overall it does give one a good idea of the band’s sound at the time, whilst showing they were probably at this stage better on record. There are however good workouts for Friendly Fire and Knew Noise in particular and Loose Talk (Cost Lives) is as percussively intense as any in 1980.

The Key Of Dreams came out in 1982, just a year on from their debut and included some improvised pieces. As such it can sound a little bitty, but at its best it shows the band refining their approach – for the most part the Metal Box-like stompers are expunged, with Always Now (the song) only having a little of that disco percussion Lydon and co loved.

Elsewhere they do sound a little like New Order on Regions, albeit one that has seasoned their angst with a little psychedelia in a very pleasing fashion. The Wheel’s feedback rumble even seems to anticipate the Jesus And Mary Chain, who weren’t to show their hand for another couple of years. There’s a decidedly rhythmic feel here, the guitar is way down on Wretch for instance, but the 15 minutes plus Sutra could be an “Albratross” (Fleetwood Mac that is, not PIL) for the post punks, lots of moody off-key guitar riffing.

The final disc of this collection takes in material the 1981 cassette release Illuminus Illumina. Opener Fallen Monument is more of an atmosphere than a song per se, but the following Are You There? has a strong drum pattern wedded to some more shimmering guitar lines. The church organ sound on Cry is a nice deviation and there’s an Eastern vibe to Floating. This cassette clearly had some interesting ideas here that needed a bit of further attention, something that they duly worked on their Factory releases.

A big point of interest for many will be the final track here, an untitled jam with New Order that took place at a gig at Reading Uni in May 1981. Beginning rather formlessly with some nods to German experimental music of the 70s, midway through it pauses for a couple of seconds and then kicks into something far more purposeful and pleasing.

It’s great to see Section 25 see this kind of respectful treatment of their back catalogue and very much deserved too. A release very much for the fans with a bundle of relevant ephemera to satisfy the connoisseur, this set has been put together with real style and respect, something that Section 25 have definitely earned the hard way. Battling against the odds they are still playing and recording today and very deserving your attention. Always Now was just the start and here you have the full story.