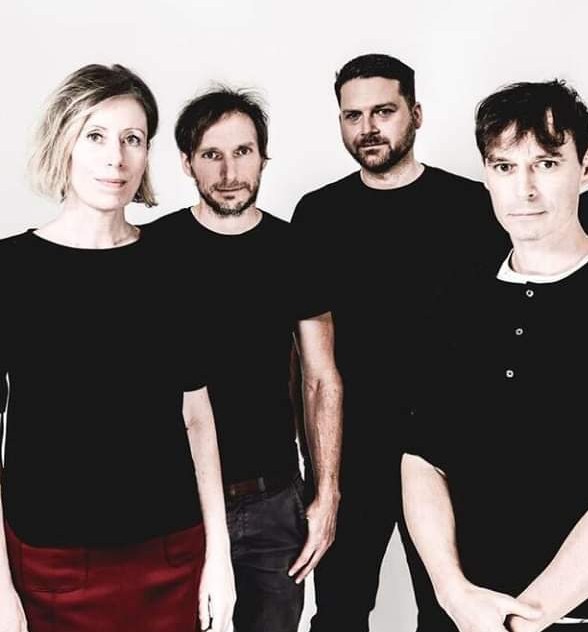 On listening to the welcome new single entitled ‘Ember’ by Secret Shine I am reminded of the book ‘Outliers’ written by talented (but now seen by many as polarizing) Canadian/ American writer Malcolm Gladwell in 2008. That treatise on “success” started with a definition of “outlier” as “something situated away from or classed differently from a main or related body.”

On that definition, Secret Shine are definitely outliers. The Bristol-based indie stalwarts have been the very embodiment of that term for nearly 30 years.

In their earliest incarnation, many were troubled as to why Secret Shine were on the legendary Sarah Records label.  They didn’t sound much like the infectious dream pop of The Field Mice, 14 Iced Bears or Another Sunny Day. They were not melody driven like The Orchids. They did not display the winsome charm of Even As We Speak or Aberdeen, nor the quintessential pop sensibility of former Factory Records outfit The Wake- (to namedrop a few of the 33 artists who recorded for the label.)

As if that mattered.

You see, then and even now, Secret Shine occupy a unique sonic space. If pressed, this writer might describe their soaring guitars, carefully honed, but never over-wrought feedback, sometimes forward percussion and ethereal male/ female vocals as more akin to a musically over- referenced genre associated with visualizing footwear.

But labels be damned.

Music is about the sound, the words and the artistic impact it has on the listener.  And impact is what I get in buckets when listening to any of the 70 plus songs that comprise their body of work.

Secret Shine have been making music that is nothing but inspiring and compelling for almost 30 years.  From those early days of being on the “wrong” label, they have been outliers. That doesn’t make them superior or precious – the music does that.

Secondly, Secret Shine are outliers because they have always recorded and played live on their own terms. Despite their longevity, these are not musical “lifers.” All members of the band have what Brits in the music business call “proper jobs” away from music.

Unlike many musicians who toil away for years in lesser pursuits waiting (usually in vain and often is misdirected vanity) for record sales that allow them to be at it full-time, Secret Shine do not have jobs to pass the time pending their future careers in music.  No, the band make records and perform live (sporadically) when they want to, when they have something to say musically, and always on their own terms.  Whether that makes them better musicians and recording artists is for you, the listener, to determine.  It does, however, further define Secret Shine as musical outliers.

Their newest release is a case in point. Released on June 15 via BandCamp, Ember is not the type of song one would expect after a three year recording hiatus. While the 10 songs on their most recent LP ‘There Is Only Now’ (2017- Saint Marie) were among their most direct, this new track is a quieter, more symphonic statement.  It demands repeated listens to flesh out its richness.

There is slowly building orchestration and boy-girl vocals gently washed into the fabric of the song, all reaching  to a remarkable crescendo of dream pop bliss. I am drawn to lyrics like these as a touchstone to their lyrical insight:

and you smile when I look at you through this fire we have made.

and we will ascend like ember in the night again.

Ascend indeed. In some respects, Ember is a song one might expect to find on the middle of side 2 of an LP. (The placement of the simmering ‘Nine While Nine” on ‘First and Last and Always’ by The Sisters of Mercy comes to mind for some reason.)  It has nothing of the immediate in-your-face blast like ‘Voice Of The Sea that opens their 2008 LP ‘All Of The Stars.’  However, this song leaves no less an impression and a desire to hear it repeatedly.

Perhaps Ember is non- traditional or predictable choice of song, for now.   But don’t let that stop you from adding it to your collection.  Rather, become an outlier yourself now and get to know Secret Shine. I highly recommend it.

Rex: Basics first. What is the 2020 composition of Secret Shine?

KS: Secret Shine is currently Jamie Gingell (vocals/bass), Scott Purnell (guitar), Dean Purnell (vocals/guitar), Kathryn Smith (vocals/keys). Our last gig was in Berlin last year and we used a drum machine for that. Our last real live drummer, Tom Adams, was due to rejoin us for Paris Popfest this year but the gig obviously got cancelled due to COVID.

Rex: Some of you work for your own design firm in Bristol.  Can you elaborate on your non-musical careers?

KS: Yes, Dean & Scott have their own design businesses/are self-employed. Jamie works in IT and I am self-employed as a massage & bodywork therapist. We take our time with releases, as is probably evident!  We come together when we get asked to perform at festivals or gigs at different times. As a band we are all busy in our other lives, but stay connected as mates, and also enjoy continuing with the music as we still have lots of creative ideas for this and people still want to hear it.

Rex: Is this the first release of new Secret Shine material since the LP ‘There Is Only Now’ in 2017?

JG: We had a couple of tracks (one a re-recording of a track we previously self-released ‘Each to the Other’, and the other a new track called ‘Only’) out on an Emotional Response (Stu & Jen from Boyracer’s label) compilation ‘PUNK’. The record featured fellow ex-Sarah Records bands Even As We Speak, Action Painting! & Boyracer.  This came out in 2018 as part of a mini UK tour that the label set up… punk, pop, and indie on tour.

Rex: Are you still affiliated with Saint Marie Records? If not, do you currently have a label connection?

KS: Saint Marie has worked with us a few times, which has been great, the last of which was a remixed and remastered compilation of our Elemental/Beyond Sea and Sky EPs. We are currently not affiliated with any labels, and we made a conscious decision this year to self-release. We did this to work around our own schedules and how we wanted to release material this year.

Rex: The band indicated on the upload of Ember that this was the first of 5 songs to be released this year. Are these tracks leading to a new LP?  If so, can you provide details? Will this song and the others be released via any physical formats?

KS: We are certainly working towards an album which will come out next year for our 30th (!) anniversary. The idea is the 5 downloads will be joined by 5 or more new tracks for a vinyl release.  There are also some other ideas lined up to celebrate the big 3-0.

Rex: I generally think of Secret Shine songs as about the human condition and the “politics” of relationships, but not about broader “public” issues such as government, war, Brexit type stuff.  Is that accurate?  If so, is that an intentional approach?

KS: Yes, that’s accurate (smiling wryly while answering) and it is an intentional approach. Jamie writes the lyrics, and sees them as poems that accompany the music. Behind the music, we are all very political and fighting for causes, but it is intentionally not what the music is about. Jamie sees the lyrics and music as an escape/non-political. I often say at gigs that most of our lyrics are about unrequited love, loss, sex and wasted lives!

Rex: Can you tell me a little about the logistics of recording Ember?  I initially assumed this song, and perhaps the 4 others, were recorded pre-lockdown, but that appears erroneous.

JG: Ember was demo’d pre-lockdown and we actually played it a couple of times live as we all really liked how the track was coming together. It’s been recorded in lockdown though, with everyone recording/contributing remotely from their different homes and I mixed it too. We also have another 12 demos, which we will choose to work on/rejig for the other 4 tracks over the year.

Rex: I find Secret Shine songs are lyrically often little puzzles that unfold with further listening? Is there anything you can/ want to share about Ember.

JG: The songs are often made up of a number of scenes that have a narrative thread/common theme, but aren’t necessarily interlinked. The theme of Ember is about endings.

Rex: For me, the song is a grower.  In listening to it numerous times since it became available on Bandcamp June 14, the arrangement and orchestration becomes more intriguing each time.  Can you tell me why you chose this particular song to signify your latest “return”?

KS: It came along too late for the album, but was the first song Jamie wrote beyond it. Having played it a couple of times, and enjoying this/the sound, we pursued it as a release. Glad you are getting more drawn in with each listen…

Rex: Can you tell me about any special instrumentation that was used? Who did the vocals? At times it seems like you are adding a second vocal? Am I dreaming that?

JG and KS: Vox wise it was 2 of us (Jamie/Kathryn) in the verse and the 3 of us tracking each other (Kathryn, Dean, Jamie) in the chorus. We often weave in and out of this formation. There was no special instrumentation on this release compared to others (Our usual set up of guitars/bass/keys), there were fewer layers than some other releases but Jamie has created a big sound through his layering of guitars and vocals.