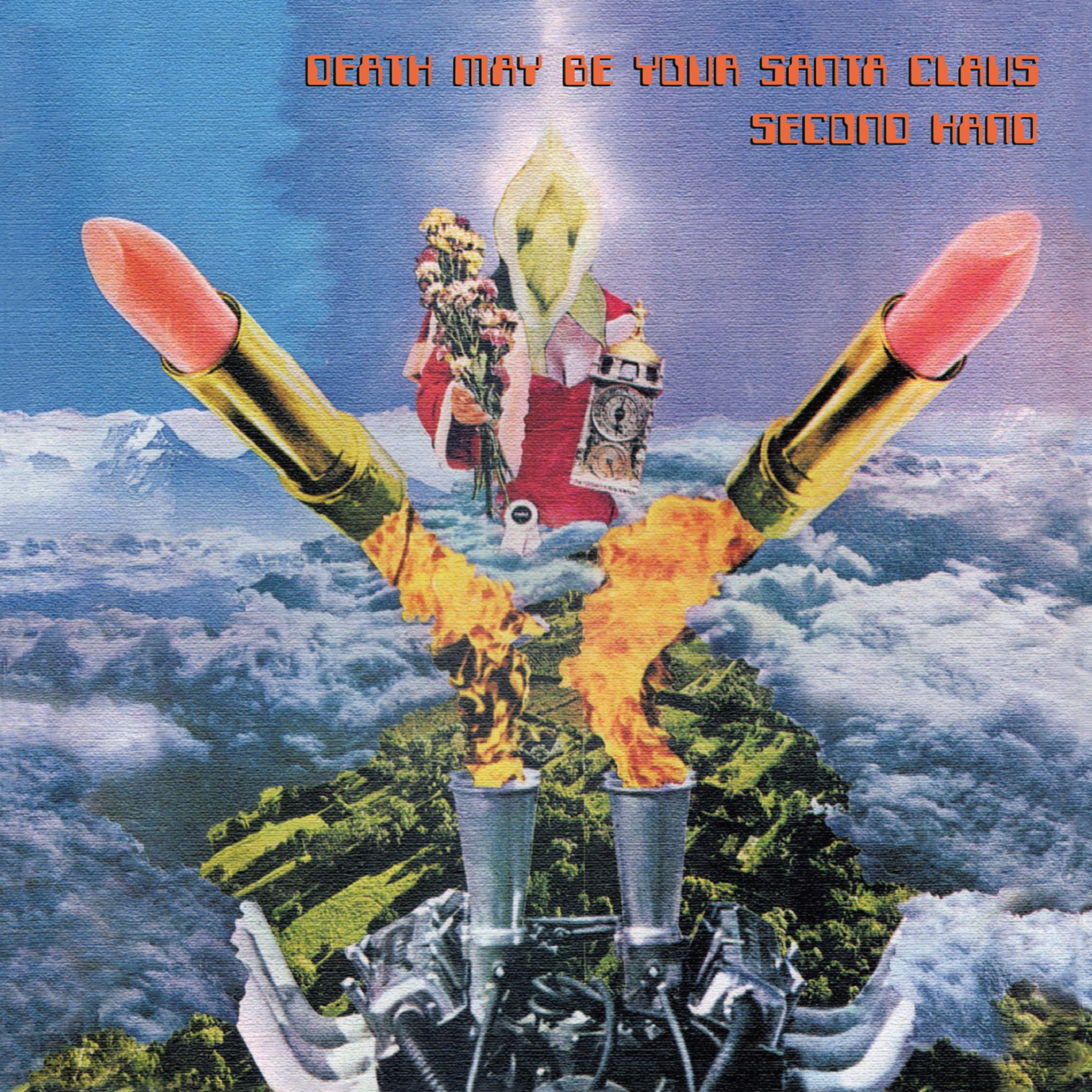 Second Hand: Death May Be Your Santa Claus 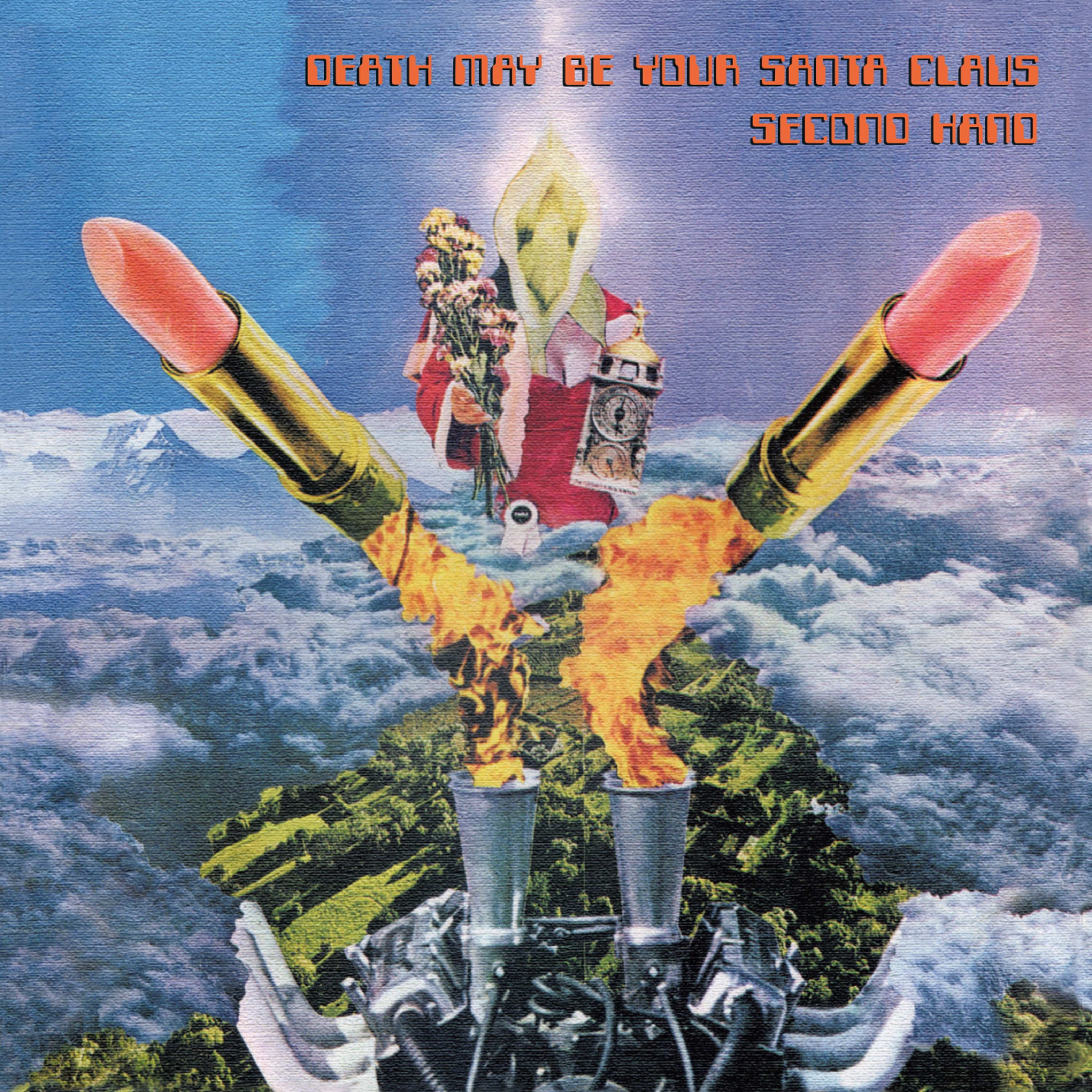 Reissue of the rare second album by Pysch/Prog outfit Second Hand, with three bonus tracks and a booklet which includes observations from the band….LTW’s Ian Canty hears this odd confection direct from the weird world of 1971….

Second Hand featured heavily on the recent Mushroom Records production (reviewed here) and even going back to their mid-60s incarnation as a Mod band called the Next Collection were on the radar of future Mushroom boss Vic Keary, who produced both their LPs. Prior to linking up with Mushroom in 1971 (and with a slightly different line up featuring Arthur Kitchener, who recorded and gigged with his Ska band the Originators from 1979 onwards), the band had released the Reality album on Polydor. The title track of this, their second LP, had already given its name to Frankie Dymon Jnr’s 1969 cult short feature and the band appeared on screen bashing their instruments in an anarchic fashion during its course. Kitchener left midway through the recording of Reality and by the time Second Hand came to record this follow up guitarist Bob Gibbons had also ducked out, leaving a hole in their musical set up which they opted not to fill. This would have a marked effect on their sound on the following record.

Not much of which will make you any the wiser to how weird but catchy Death May Be Your Santa Claus is. Second Hand at this point in time did not resemble anyone much on the Prog scene, apart from a few skewed glances back at the past playing Soul Stompers for strutting Mods in the 60s. I’m far from an expert on Prog – I come from that generation that just missed out on it so had that kind of disdain-through-osmosis passed on by older friends, which I’ve tried to conquer over the past 10 years by being a bit more open-minded. It’s reaped dividends as I’ve gently eased myself in via on the cusp recordings by the Nice for instance, where the clear links between Freakbeat and Mod/Soul could be heard and from there gradually I’ve come to appreciate the sheer nerve and verve of some of those bands.

Happily Second Hand display both these attributes on Death May Be Your Santa Claus and also managed to make things absurdly infectious to boot, in the strangest way imaginable. Take the title track, built around an undeniably perky repeated organ riff, but also there are Soul vocals and all kinds of choral effects. It’s delightful and fun.

Nothing on this album overstays its welcome either as the tracks just slip by agreeably, meaning you’re not looking at your watch waiting for it one to end, rather hungry for more. Sometimes it’s like they’ve got so many ideas they can barely pack them all in, with Hangin’ On An Eyelid having a similar pop nous to early 10CC. This contrasts with Take To The Sky’s electronic pulse beat, recalling the experiments of the BBC Radiophonic Workshop. With the lack of a guitarist, the keyboard and bass tend to drive the sound, which renders a couple of tracks even a little danceable. Somethin’ You Got has a bit of down-home Glam stomp and ends with someone barking like they were a dog (of course it does!). The crazed vision of Second Hand can’t be easily described, but it is a load of fun seeing just what they try to pull off next.

The reprise of the title track totally deconstructs the original and becomes a kind of nightmare Soul vision that The Residents could have easily served up a bit later on. This one also harks back a little to their time as a Mod dance band at those heady 60s all-nighters, but quickly the riff is pulled out of shape and it becomes to resemble of psychedelic trip to a funfair’s hall of mirrors. Then a high, heavenly voice take us to a thumping beat where the heavy bass line makes it even seem a little like the Stranglers Meninblack adventures ten years early.

The three bonus tracks appended to this release also run the gamut: Baby RU Anudder Monster picks up where the Bonzos left off as far as rum 50s pastiches go and Dip It Out Of The Bog Fred(?) again evokes the cut-up mayhem of Ralph Records favourite sons. Funeral, also featured on the Mushroom Record collection, is more in the Hangin’ On An Eyelid mode, a nice piece of brassy and ecstatic Psych Pop, showing that Second Hand could always pull something ultra-catchy out of the bag when the weird threatened to engulf them.

Time was running out for Second Hand – with this album not selling they changed their name to Chillum and released a self-titled album, but that was it. Ken Elliott went onto record with many of the Reggae stars that still sought out Vic Keary at Chalk Farm into the 70s and then began a session musician career in earnest.

Though Second Hand never made much of a mark at the time their creativity and the sheer gung-ho force of their playing has meant over the past 20 years this album (and their debut Reality) has become much sought after. Sometimes with things like this after you have got past the rareness of the item in question the music is sometimes a little lacking. Not here. Death May Be Your Santa Claus still teems with ideas, energy and imagination. Progressive in a very good way.