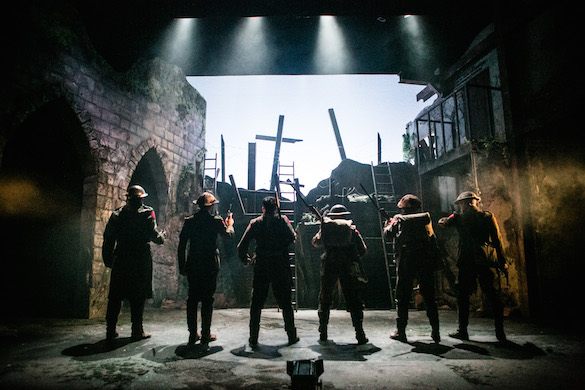 Dave Jennings reviews a brilliant and moving stage production of the classic Great War novel as it hits North Wales.

By way of marking the centenary of the Great War, Rachel Wagstaff’s stage adaptation of the Sebastian Faulks novel is currently touring. Bringing such a well-known book to the stage is bound to be a major challenge but this production succeeds brilliantly and perfectly captures the essence of the story; that is individual emotional torment set against the back drop of apocalypse.

Individual impact is very much the key to the success of this production and, fittingly, when we consider the recent debate initiated by Michael Gove regarding the ‘Blackadder view’ of the Great War, reminds us that the war was indeed fought by individuals each with their own set of circumstances. This rather obvious concept seems to have totally defeated our current Secretary of State for Education and he’s certainly not the first politician to have attempted to interpret history to suit his own agenda.

What Birdsong does very well is to offer us a microcosm of the Great War and therefore bring to the fore the experience of the individual and lend due weight to the wealth of valuable personal documents that take us right to the heart of how it felt to be in the conflict. As a keen historian, Gove would surely understand that the Great War is the first major conflict in which the majority of British participants had a certain level of literacy and therefore we are fortunate to able to view these unique events through their eyes. To this end, you would be hard pressed to find a better vehicle than the novel Birdsong.

All well and good, but how do you go about bringing a production of this scale to the stage? The answer is soon clear as this brilliant performance unfolds on Victoria Spearing’s set design that is both chillingly evocative of the Western Front and versatile enough to also accommodate scenes of pre-war France. The necessity for both settings is due to the nature of the plot and the main character Steven Wraysford, superbly interpreted by George Banks, experiencing flashbacks to a love affair before the conflict. Banks portrays a cold, detached character who almost seems indifferent to his surroundings and the suffering of the men in his charge. This contrasts with the endearingly simple loyalty of Peter Duncan’s excellent Firebrace.

The cast handle the tricky issue of continual jumps between the past and present magnificently and ensure that the narrative and momentum is never lost. It’s also a  tribute to the excellent direction of Alastair Whatley that we can follow both the course of the love affair with Isabelle and the action from the dawn attack on the Somme through the remainder of the war in a seamless manner. In this way, we see the developments of personal traumas unfold within the context of the wider horrors of the conflict. Therefore a seemingly dead Stephen, left in a field of corpses awaiting burial, rises instantly as he’s implored to think of someone who loves him and we are suddenly in a different time and place. The real magic of this production is that for each step down into Hell you take with this excellent cast, there is a corresponding step that reveals more about the characters’ individuality.

Hell is perhaps an appropriate phrase as a lot of the action takes place in the tunnels dug by men such as Firebrace who spent much of the conflict in cramped tunnels beneath the Western Front. These confined conditions, combined with the real possibility of meeting the enemy hundreds of feet below the surface at any moment, offer a particularly sobering perspective. They are also impressively recreated onstage in a way that takes you right into the tunnel to share the claustrophobic plight of the men in there.

To ensure we never lose sight of the crucial nature of the individual perspective, we suffer with the helpless Firebrace as he desperately awaits news of his stricken child that he can’t visit back home. The emotional descent of Stephen is also mirrored by that of Isabelle and the ultimate disappointment of Lisette, a role in which Selma Brooks excels. Possibly the most poignant moment is delivered when, shortly before going over the top, an utterly distraught Tipper shoots himself rather than face the enemy guns.

This production of Birdsong is brilliantly planned and delivered and certainly deserved the ovation it received at the end. However, it’s no insult to say that a more fitting response may have been total silence, such was the atmosphere evoked by the performance and the manner in which the audience was absorbed. You should watch it if the chance arises, as it’s an entirely fitting memorial to the centenary of the Great War and a gripping narrative of the individual and widespread trauma it encapsulated.

Birdsong is adapted from the novel by Sebastian Faulks.

The production is adapted by Rachel Wagstaff and produced and directed by Alastair Whatley.

To find out more about the Birdsong tour, please visit the website

All words by Dave Jennings, find his Louder Than War archive here.