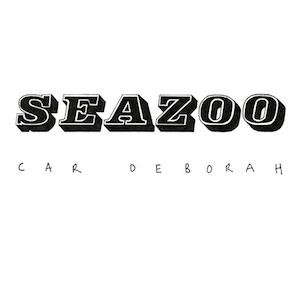 Car Deborah is the new EP from Seazoo. Full stop.

Ben Trow and Llinos Griffiths have gone back into the spare room (and several other locations) once more, with drummer Steffan Owens. What returned is a fresh batch of fuzzed-out alt-pop songs Called Car Deborah. This Wrexham mini-mob have sharpened their already clever lyrics and developed a very strong, no-nonsense sound. Each Seazoo release has been an  evolutionary step. Car Deborah definitely brings us (and them) to the next level.

The “core” of the Seazoo sound is both simple and complex. There are the dual vocals, minimal, yet highly effective guitar lines, pessimistic lyrics sung in an upbeat manner, non-linear compositions with lots of starts and stops. This slightly askew mix is nothing new – and it’s easy to find touchstones across several of your favorite genres. Seazoo is not power pop in the classic sense. It’s warmly grim with all the charm of the sociopath sitting in the next cubicle. The minimalism of their first EP, Ken, and the jangle of the Dog Hotel single have new company in big chords, big drums, and big ideas on the Car Deborah EP. Christ on a cracker – this one almost swaggers.

The lyrics are easily relate-able, through your favorite dark lens. Themes range from the shared memory of architecture (The Roar of MJ Finnigan), haunted houses (Martyn and Jayne), and migraine headaches (Panda Pains). Nerdy, gloomy themes with big hooks and well-thought arrangements.

The opener, Dawn in the Mirror, as well as the follow-up, Panda Pains, have that “classic” Seazoo sound. On the surface, these are two bouncy songs that don’t drive too close to the edge of the road. Ben sings the lead, but the voice of Llinos is always there. The rhythm is driving and straight ahead, and the guitar changes between the verse and chorus wobble and bend around some unexpected curves. There’s a blend of poppy acoustic strumming at play with, and sometimes against, very fuzzy (and well played) leads. The understated keyboard work of Llinos Griffiths completes the Seazoo “sound” and expands it. Llinos brings a big box of crayons to the party with the sounds she makes. While the keyboards are never out front- they are completely essential to the sound. The anchor is Steffan Owens’ drumming- solid, strong, and not afraid to go big.

Seazoo melodies can shift from smooth and harmonic, to angular noise, with the sensibilities of artists like Yo La Tengo, Young Marble Giants, Talking Heads, Fanfarlo, and Bearsuit, to name a few. That might sound like an odd mix, but the stylistic touchstones all seem to be there in very weird and wonderful ways.  The vocal phrasing of David Byrne with the guitar mayhem of J Mascis.

The Roar of MJ Finnigan is a musical pivot point on Car Deborah. This is where Seazoo goes off their familiar road, and into a space they haven’t traveled before. All of the above mentioned elements are there, the keyboard weaves a melody on the right channel then switches to a harpsichord-like chime. Ben thrashes the rhythm out on an acoustic guitar, and Steffan Owens propels the song and throws in the odd-hit in just the right places. The song abruptly stops and starts again. The Roar of MJ Finnegan pushes Seazoo off into riff-land as the song progresses. Layers of gauze from keyboards and noisy guitars are skillfully applied. It’s a subtle build, then everyone throws down. Hard. Seazoo is shifts gears and the pedal is down. Steffan Owens’ drums come out to the front and they let the wheels come off a little. Maybe more than a little.

Martyn and Jayne starts with crackling static that quickly shifts to the pop-jangle-bounce of Dawn in the Mirror and Panda Pains- but for me this is the transformative element of the Seazoo “sound.” There’s an edgy aggression, vocals with conviction, long- unexpected pauses, and overdriven guitar work that sounds more than a bit like Sonic Youth. These are all wonderful things.

The closer to Car Deborah is a total groover instrumental. Indigo Reader could have been lifted from a sprawling compilation of Yo La Tengo rarities. All of the instruments provide a textured rhythm – it’s sort of an oblique jam. A swervy guitar melody builds, then crashes, into a fuzzed out wall and they drive it a couple of miles. The composition and performance on  Indigo Reader places it as one of the more sonically powerful songs in the entire Seazoo catalogue. No words, no stories, just fun sounds with lots of t-t-t-t-t-tension. Smart writers, performers and engineers are at the core of Seazoo. Smart sounds result.

Car Deborah is well written, performed, and- this must be said- engineered. Amps were perched in stairways, drums were recorded in multiple locations (any place that wouldn’t result in a noise complaint), and despite these factors the mix has a very “live” and well balanced sound. This is a great EP that ends too quickly- and hopefully the sounds and stories from Car Deborah are just a prelude to their much-anticipated debut full-length.

Car Deborah is out now, via iTunes. Physical copies are only available at their live shows and Seazoo will be playing a mini-blitz of shows in the greater Wrexham region to support the EP release- hopefully near you. Follow them on Twitter and be the first to know if, when, and where they start streaming the EP online (because I have no idea).

Seazoo can be found on Facebook and they tweet as @seazooband. Also check out their label, Club Fandango.

All words by Nat Lyon. More writing by Nat on Louder Than War can be found at his author’s archive. Nat’s on twitter as @natlyon.