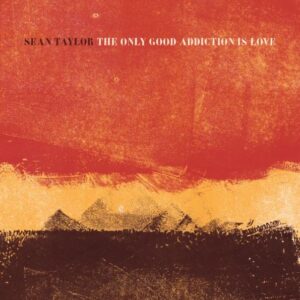 Sean Taylor, the young London troubadour, whose catalogue includes half a dozen albums packed with quality songwriting and guitar playing, has seen his star steadily rise above the London skyline about which he sings so eloquently. With ‘The Only Good Addiction Is Love’, he’s ready to shift the boundaries. Mike Ainscoe listens in on the change in approach.

Sean Taylor’s last album ‘Chase The Night‘ was a corker, including, amongst a batch of quality tracks, the tremendous talking blues of ‘River’. He’s one of those guitarist/singers who has passed many people by yet when you hear him play, you wonder why. Expectations might be genuinely high then for his new record. ‘Chase The Night’ and his previous albums sat in the familiar hard living life of the troubadour and focussed heavily on the urban cityscapes of London. Taking the conscious move of distancing himself from his comfort zone, the new songs take a deliberate step towards a more challenging world – what he calls truth in beauty, beauty in truth. The aesthetic side of life is what provides the vision for his latest round of musings. Recorded in Austin, Texas it features a couple of contributions from Sean’s regular buddy, touring partner and double bass legend Danny Thompson plus a more significant contribution from the multi-instrumental skills of Mark Hallman.

Indeed, the pull of the aesthetic is noticeably strong in the new material and from the opening title track, the change is evident. He’s taken inspiration from a range of sources – ‘The Only Good Addiction Is Love’ being a quote from the former president of Uruguay whose personal crusade led him to donating a large proportion of his salary to charity and living on a farm with his wife and three legged dog. Poets, writers and artists (Klee and abstract expressionist Rothko) all provide a similar creative impetus; it was the works of Spanish poet Frederico Lorca, namechecked in ‘Lorca’, which gave Sean the drive to allegedly write twenty songs in a few days.

There are the distinctive Taylor pieces – both ‘Moma’ and ‘Rothko’ being Taylor/Thompson duets which are epitomes of the less is more approach. ‘Flesh And Mind’ is similarly stark, all breathy vocals and some delicately understated yet totally effective guitar and piano. On the other hand, ‘We Can Burn’ has a Lennonesque element where the instrumentation is, for Sean, expansive and includes a rare appearance of some drums and a healthy wedge of brass. Otherwise, the a Acoustic feel of the record allows the quality of his guitar playing to shine through, with an emphasis on the atmospheric and ambient

A nod towards Kerouac comes in the form of ‘Desolation Angels’, the novel in which he escapes the wild temptations of the city for a more simple life as a fire ranger in the forest. The parallel with the move to take this album in a different direction, seeking alternative inspiration to create musical art, makes this perhaps the significant track on the record. A song you can maybe imagine in the hands of someone like Mark Knopfler.

The start of ‘The White Birds’ musically feels a close relative to Elbow’s ‘Scattered Black And Whites’ – a cascade of all tumbling piano notes and guitar notes, but for Guy Garvey read the words of the poem by W B Yeats before the song picks up and becomes an up lifting and celebratory album closer. Released as a teaser for the album, it feels both slightly out of place yet also stands as a track whose very nature may well be one which opens up a few more doors into more widespread appeal.

Yes, in some ways it’s a slight departure for Sean Taylor, but all the better for it really. Longer term fans who’ve been part of his journey so far will knowingly smile and nod in appreciation at the trademark of quality which is once again stamped all over this piece of work.

See Sean Taylor play ‘London’ from the Songs From The Shed sessions :

Listen to ‘Bad Light’ from the new album:

You can find Sean Taylor online here: seantaylorsongs.com. He is  also on Facebook, tweets as @seantaylorsongs and has a YouTube channel.

All words  by Mike Ainscoe. You can find more of Mike’s writing on Louder Than War at his author’s archive and his website is michaelainscoephotography.co.uk.