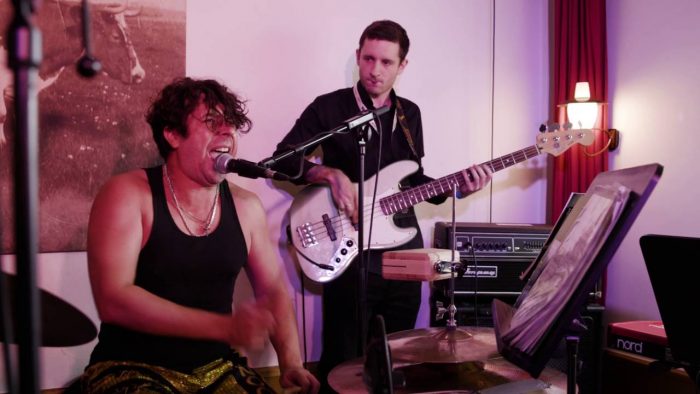 Ah Haldern Pop, a festival that I’ve been to for over a decade. It’s a rum old festival, is Haldern Pop. The festival – and the village it’s hosted in – seems to defy musical fashions and yet embrace the zeitgeist. Its very normality is maybe what sets it apart. Of course, Haldern often does as many other festivals do. You get the acts of the day, you get filler. You get bored watching bands that are going through the career motions. But Haldern must stand on a confluence of tectonic plates or underground fissions that allow another reality. It is perfectly possible to be sober and be ‘out there’, here; aware that this unassuming village temporarily becomes the gateway to another, altogether more magical environment. This feeling also affects the acts who sense, or see, that creative wildness here is allowed, and aim for the firmament. This year, Julia Holter, Conner Youngblood and Amber Arcades charmed. Ebbot Lundberg’s new band, The Indigo Children, The Vryll Society, and Yak rocked the Spiegelzelt. But two acts summed the Haldern spirit up for me more than any other.

There’s a picture of an old lady milking a cow in Haldern Pop Bar, right behind the stage. Normally when a band plays this picture seems incongruous, out of place. It looks uncool, man. Not hip. Not even remotely ironic. It freaks bands out and makes them feel self-conscious (honestly; I have seen this over and over). It’s the sort of thing a trendy provincial brasserie would stick up, a “connection” with more innocent tymes. But for Sean Noonan’s set it was a perfect backdrop. It made things wild, WILDER. A visual riposte to the bizz and all those that still worship at that ruinous shrine.

Backed by Zappanation (a fourpiece who, simply, threw rock’s well-thumbed jigsaw puzzle out of the window) Sean Noonan settled himself at his drumkit and (quite literally) bashed out tales of hammers (he likes them, a lot), ketchup, donkeys and dwarves.

How to describe the music? Imagine a head on collision between Swell Maps, Gong, the Residents, the Magic Band and the Modern Lovers. Freeform jazzy struts, too many notes; outrageous, dayglo sonic curlicues. A singer-drummer barking at the moon (imagine Michael Mooney laying down his proto Can vision on Sesame Street). The opposite of “real music”. As Daevid Allen said, life’s too serious to be taken seriously. Noonan’s wide-eyed patter certainly has something of Johnny Richman about it. Just as La Richman can rabbit on about Abominable Snowmen and dating a “cute little building from France”, Noonan can indulge in 10 minute tales that sound as if they would be better as footnotes in Lord of the Rings, or in a Hannah Barbara cartoon. He completely got away with bashing out some fried, stop-start psychedelic noodle about tommy ketchup. “Ketchup, ketchup, ketchup”, he groaned, whilst Zappanation rewrote rock’s history around him.

The audience in the bar was at first bemused (dazed as if in a sort of post-collision shock) then utterly into this beguiling loon and his song visions. Standing at the bar was a bunch of German punks, bespattered with mud, immovable, scowling and drinking inordinate, unfathomable amounts of beer. One glared at me and pointed to the band. “This, this”. “Yes?” “This is the OPPOSITE of boring.” Yes. It was. The polar opposite. That Noonan was dressed up in a Rocky cape and shorts only added to the glorious sense of absurdity. The lady milking the cow gazed out of the picture, as in approval. Shit was fine and it was just after 1pm.

The musicians that make up Stargaze and the choir Cantus Domus – under the aegis of André de Ridder and Ralf Sochaczewsky respectively – were the other standout acts over the weekend. Taking up residence in the village church, the two organisations presented a specially tailored piece for Haldern Pop, collaborations with This Is The Kit and Loney Dear, and reworkings of material from Boards of Canada and David Bowie.

Both de Ridder and Sochaczewsky know and love the festival and the village well, and therefore had a chance to score their Haldern piece sympathetically. Still, ideas are only good when they work in the flesh. And this piece for Haldern must have taken some long nights in the making. The pitfalls for making modern classical/pop crossover piece are many. Too reverent? Too serious? Too – well – poncey/hipster? There’s always that danger. But things clicked for the choir and orchestra from the off. When the choir began walking and singing through the church, weaving patterns both physically and sonically, and when Stargaze pitched in with sympathetic, almost gossamer soft passages of orchestration, there was no option but to stare up to the vaulted ceiling and dream away the time. A supine audience, hit up to the max on harmonies and subtle changes of phrase and melody, nodded off or gazed around contentedly.

This magical piece followed two brilliant collaborations with This is the Kit and Loney Dear. This is the Kit’s wry, bittersweet music (and needle sharp observations and turns of phrase and tone) were both brilliantly contrasted and supported by the sheer weight of musicians behind the threepiece. Somehow the gig put this reviewer in mind of the lushness of early Blue Nile. By contrast, Loney Dear’s increasingly dark soul-pop tore through the church like a bushfire, due in main part to Cantus Domus and Stargaze adding some very subtle counterpoints to Emil Svanängen’s Nordic bombast.

Following on later were two pieces Boards of Canada and David Bowie (which de Ridder had played at the BBC Proms) which were utterly wonderful; mainly because of the clever, and flatly unpretentious scores, and an overriding willingness to highlight what is special about both artists. I’m no fan of “reworkings”. They can be lazy and (to borrow a phrase from the vernacular) up their own arse. But de Ridder and Sochaczewsky’s Bowie pieces were especially charming and surprising (yet again highlighting how brilliant, and clever, and flexible these songs are). At times they came over like witty Michael Nyman takes. Like it or not this is where a lot of interesting things in pop music are currently happening.

It would be wrong to review Haldern Pop and not recount the many weird things happening in the fields around the main festival site. I’ve seen luminous people in the dead of night here. A man with no shoes on acid, eating gooseberries, perfectly pleasant he was, too. Then there was the man who claimed to be John the Baptist one minute and a man in desperate need of 50 cents (so he could have a shit) the next. I’ve seen burnings and keyboard smashings on an industrial scale. Doors erected in the field which you have to pass through. Strange moonlit rites and friskings in the cornfields that surround the site. Blue sheep. All carried with the minimum of fuss, security and silly “mad for it” bollocks that mean I will never, ever go to a big UK festival. This year’s Haldern Pop saw a poetry marathon next to one row of (fearful) communal bogs. Not official, just a bloke who read poetry then would pop into a cubicle to spend a penny. This went on for  three days. Why? Who knows. As I said earlier Haldern is a rum place; and we should leave it at that.