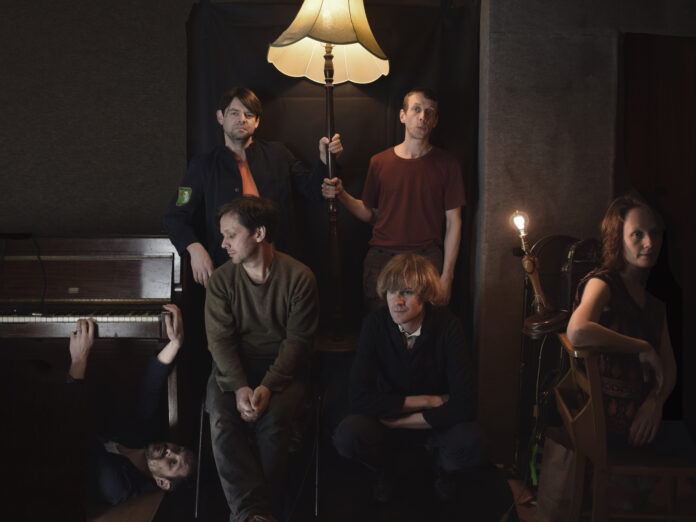 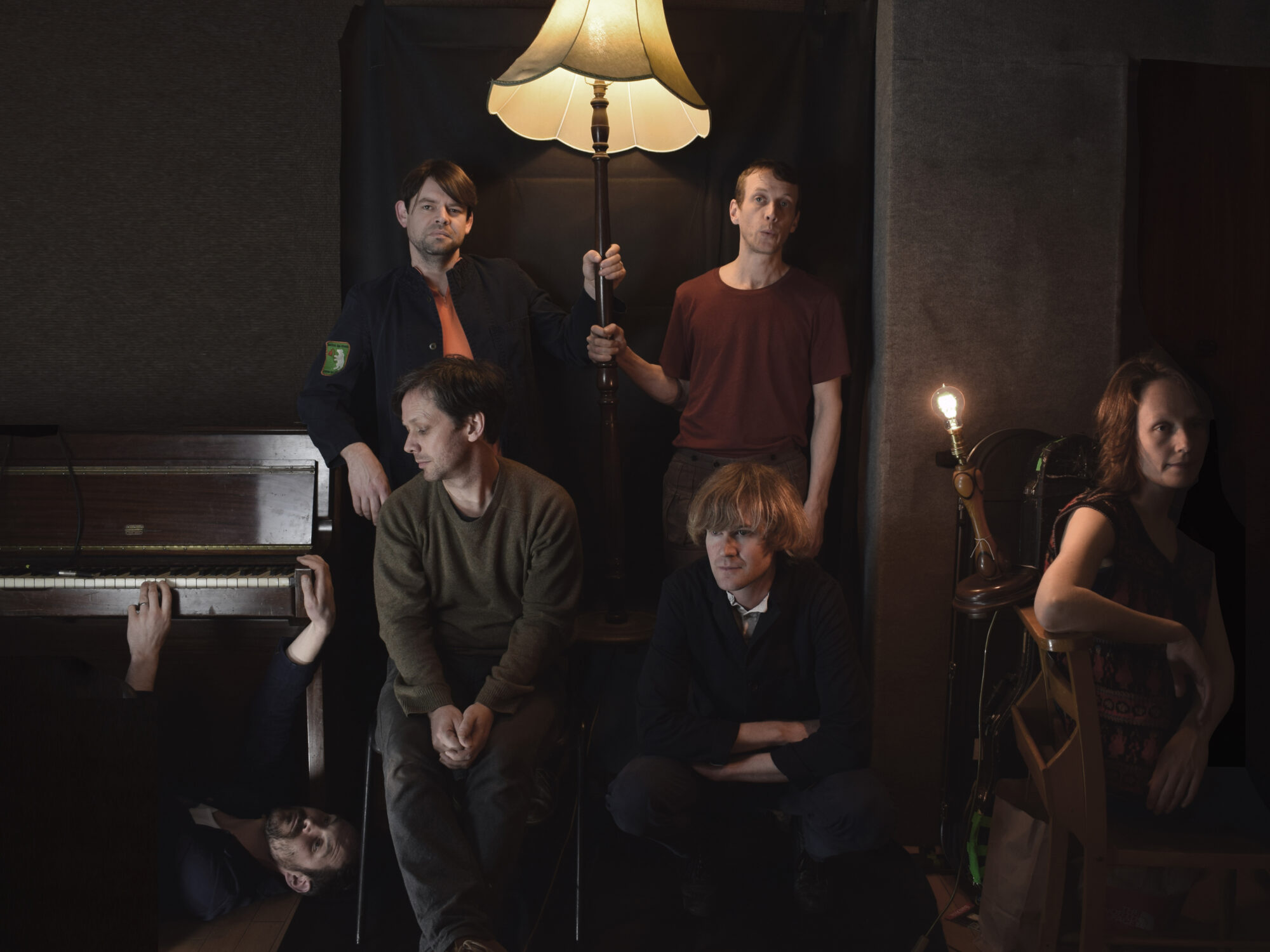 You might think who on earth are Sea Power?

Well, they used to British Sea Power, but last year decided to drop the B word as they prepared for the release of their eighth album Everything Was Forever.

The name change hasn’t done them any harm as the record entered the charts at number four managing to hold Ed Sheeran off the top spot for most of the week, but Sea Power’s story is one of hard graft on the road, and their eccentric shows featuring a dancing bear during the encores

Paul Clarke spoke to singer/guitarist Yan Wilkinson about how the new album was recorded during the pandemic and the reaction to their name change.

What was the genesis of this record?

A lot of albums that are coming out now were started during this pandemic, but technically this one started a year or more before that. At least a couple of the songs were pretty much finished, and we were playing them. There wasn’t really a well-defined starting point with a focused plan – we are not good at making plans or controlling our image.

There were a few ideas, one I didn’t really share and was just in my mind; I thought of it as if we were to finish – let’s just finish on a good album which sums us up in a nice way. Just in case, and to do a slightly more emotional and open album maybe.

The last couple of years have been a very odd time so were you influenced by the weirdness around the sessions?

I don’t think it is a COVID album. The main period when songs were coming together was largely in that time. Although for me, one was written a year before and one of them is really old, when we did the Machineries of Joy album, but that didn’t make that [album] then. Then it was on the video game, Disco Elysium, that we did the soundtrack for, and everyone was asking “this song you wrote, why didn’t that go on the album?” I said it should, and I totally agree.

Two Fingers might be seen by your fans as being a reaction to how the crisis was handled by the powers that be.

Lyrically there is only an element for me of being influenced by any of this, although people often think that Two Fingers is to do with COVID and the handling of it. I can see why, but that’s how I feel mostly about people in charge of things in life, so it just fits well.

I never fully understand what my songs are about, because I don’t sit down and have an idea and then expand on it. There’s sort of a romantic idea which people think that’s generally how people write, and it maybe it is a lot of the time; I really like that girl and I’m gonna write a song about her.

So what is your songwriting process?

I write weird notes to myself on my phone or on bits of paper round my room. I collect them and keep trying thing until I think that’s the one that’s meant to go there. Slightly collage-y, an element of random and I’m not happy with random ever, so I normally think that is kind of what I was thinking deep down somewhere. I can’t always easily explain songs, and as I get older I want to less and less.

You have said Two Fingers is in least in part inspired by your late father?

I summed it up as that, and in a way it is true, but it’s also a song I think he’d have wanted us to have. It’s more than just about him; he was always critiquing us, he’d get really involved, annoyingly so at times. He’d say “this bit’s really good but that bit’s really wrong”, and why have you done that. It’d either be funny or really annoying, depending on the circumstances.

He was one for saying what was wrong with things in general, not just us. Films, music, the news, people on the news, politicians. The chorus is almost taking it from his mouth in a way, but I don’t truly know if he actually used those phrases, or if I’ve semi-fictionally put them into his mouth. Behind the pop and guitars there’s a slightly ethereal feeling in there.

Another song Lakeland Echo sounds to me like not only a love letter to where you grew up in the Lake District, but also to the natural beauty to be found across the UK.

I’m similarly a spectator to this as it’s my brother’s song, and he doesn’t tell me what he’s doing, let alone explain it. I pick up on it whilst we are listening to the demos, or getting through the mixes, in the same way you would. He lives in the remote Scottish islands, so he’s very much part  that world of slow, beautiful, quite hard stuff as it gets pretty stormy, cold and you don’t get a lot of daylight.

So that splendid isolation has rubbed off on him?

He fully embodies that in a slightly hermity kind of way.  I think you can feel that on the songs he has done on the album, particularly this time, although it’s not a new thing for him.

There are still loads of big anthems like Folly or Doppelganger which will sound great live but if you listen carefully the tone of the record is actually pretty reflective.

If not always in the words but something in the mood of it. It has a friendly side to it but it’s a quite dark depth in some ways. In the old days sometimes, if I was going to write about something in the real world, I’d often feel scared about something happening in the future, almost like a warning which sounds a bit doomy, and I suppose during this time I felt more like everything has happened now.

Why did you decide to drop British from the band’s name?

It is best explained by the reaction we had by changing it from certain elements of society, or people on Twitter as it is. They’d be horrified as if it mattered. We’re just a band, you don’t know who we are or understand us. Why do you really give a fuck anyway? You’re used to this weird tool to express these emotions, these people you’ve got no link whatsoever, and they’re really emotionally angry, violent, small minded people.

So in a way it is two fingers to the online trolls who seemed to have entirely missed the point.

It’s kind of why we changed our name, because this what is has become. It’s a weird, triggering word and it must be having like a colouring effect on everything you do in a way, just by the nature of it. It’s just too much, it’s finding something more open for our band and our songs to exist in. It’s just a bit of an obstacle, rather a word we have a problem with personally. The reaction only lasted a week or two and then people moved on to another thing.

Judging by the record’s success it seems that your hardcore fans have been smart enough to get why you’ve made the change.

I guess not everyone wants that amount of thinking to take place in music and don’t expect it. In a way that’s cool because you’re getting some nice sensitive people involved in you, and some of the other idiots might not what to. But at the same time you’re just putting off some people.

I suppose the manufactured outrage from some is really just a sign of our troubled times.

The way things arem everything is so divisive and so full of black and white, won’t listen to the other side. I don’t like that at all. I think it is pointless going round and round in a circle, so it was just to remove ourselves from that, was the idea. I quite like it when bands change their names, it could have been another name altogether, but we couldn’t think of one.