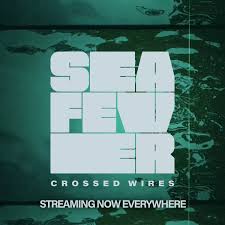 The debut single by Sea Fever, a new band featuring Bethany Cassidy who was in the long-running Blackpool outfit Section 25, along with members of New Order and Brix And The Extricated… Ian Canty has no sea legs, but takes to the band like a duck to water…

Sea Fever are a new band, but contain several members who have already made somewhat of a mark on the North West’s music scene. Phil Cunningham and Tom Chapman are currently part of Factory veterans New Order, drummer Elliot Barlow has played alongside ex-Fall oldsters in Brix And The Extricated and bassist Iwan Gronow is in Johnny Marr’s backing band. The line up is completed by Beth Cassidy, who was in the revitalised Section 25 until recently.

But enough of the past – Sea Fever belong firmly in the here and now. The band came together over the last year despite all the difficulties the time has imposed on everyone, musicians very much included. We now can survey the initial fruits of their industry with the release of their first recording in the Crossed Wires single.

This is a record that builds on their collected previous work and experience, sparkling with the kind of post punk freshness that coloured the best of their former (and current) groups’ recordings. But despite that, Sea Fever quickly mark out a personality all of their own construction. An introduction of guitar jangle and electronic rhythms pulses sets the tone, before fluidly developing into a bracing rush of sound that is underpinned by an insistent keyboard melody and overlaid with a simple but effective vocal refrain. The total sonic effect is dreamlike, almost psychedelic and stately, but also thoroughly addictive.

The male and female vocals complement each other very well and there’s a cool sense of intrigue that hangs teasingly in the air for the duration. All of which could make for a dense mesh of music, but there is a lightness of touch employed here, meaning that this combination instead presents a hypnotic and charming whole. The song itself seems a subtle meditation on personal communication problems, which to my mind makes it thematically akin to Messages, OMD’s brilliant 1980 single (and there’s nothing wrong with that). Certainly the sound that is evoked by Sea Fever here both enchanting for the present time and promising for the future. In a nutshell, this is perfect modern pop music which deserves to be heard.

Sea Fever hope to follow up this single with a debut album due later in the year and this song is the ideal appetiser for it. Yes we are very much in the band’s early days, but judging from the evidence that Crossed Wires provides for the listener, it should be a collection well worth raising one’s hopes up for.