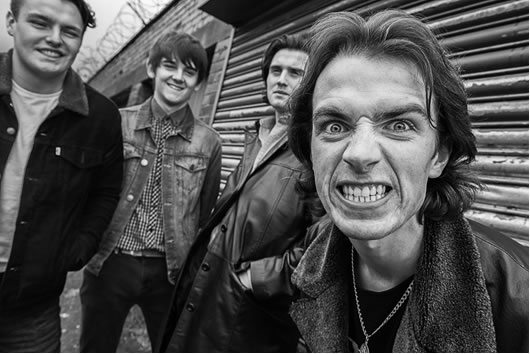 In the summer of 2015, acoustic singer-songwriter Kaiden Nolan played a sold-out show at Sound Control followed by a slot at Kendal Calling’s infamous House Party Tent. After a run of gigs through 2016, he decided it was time to start afresh and with best mate-come-brother Liam Cleere and Middleton (North Manchester) school friends Tom Ogg and Jack Phillips, they started the Rock n Roll quartet ‘Scuttlers’.

Blending Rock, Punk & Indie, Scuttlers had a healthy maiden year in 2017 with slots at Band On The Wall, Manchester Academy and Britpop Extravaganza Shiiine On Weekender.

They now embark on their first Manchester headliner at Jimmy’s on Sunday 11th March as they launch their debut EP ‘We Are Scuttlers’.

More of Dave’s photos on Louder Than War can be found here. He’s also on Instagram and his personal website is  northernfacephoto.com.