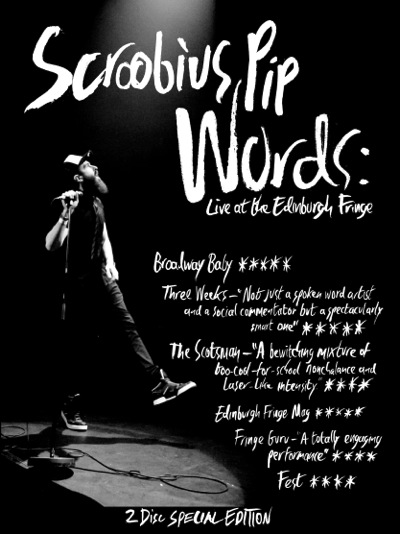 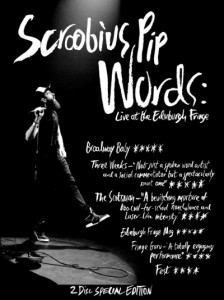 When Scroobius Pip erupted out of the spoken word scene at the tail end of 2006 with producer Dan Le Sac and their seminal debut single ‘Thou Shalt Always Kill’, little could we predict the cultural force that Pip would become seven years later. From underground poet to national radio host, label boss to author, Scroobius Pip has solidified his reputation as being a member of contemporary indie royalty, all the time whilst taking each of his new ventures in his stride, most recently in the form of his DVD release Live At Edinburgh Fringe which documents the last of 2013s 19 sell-out gigs at The Fringe.

As the lone figure of Pip stands silently on the stage, presumably in mock sincerity, we can see the two sides of David Meads personified by his persona; the sincerity that runs rampant through his lyricism is also present in Pip, as is his dry, often dark wit. He stands silently, upholding an air of imposing seriousness, a seriousness that belies some of the DVDs more comedic moments, yet perfectly encapsulates the inevitable earnestness with which it’s juxtaposed.

“Alright, let’s start this shit” he finally says, before a tongue-in-cheek, somewhat hyperbolic intro informs us that, due to copyright laws, they can’t show us “one of the greatest vocal performances in the history of entertainment.” A shame really, given that the dance moves alone are entertaining in their own right. Humour aside however, the set proper begins with a rendition of solo single ‘Introdiction’ which, without the expected instrumental behind it takes on a new lease of life; the flow faster, the lyrics clearer, something which presents itself more and more as the DVD progresses.

Despite Fringe being predominantly a comedy festival, Pip’s insistence that this isn’t a comedy show proves only half right, as in-between poems he entertains the audience with his usual on-stage banter and explanations of the origin of his works. It’s probably just as well, as the hard-hitting accounts of teenage suicide, terminal illness and occasional sexual deviance would prove a little heavy without being interspersed with stories about Kinder Eggs.

Established fans of Pip, or indeed his work with Dan Le Sac, will ultimately find a lot to love about this release as familiar tracks prove again and again, simply by being performed A capella. There’s also a couple of less-serious numbers here which will be completely new to those familiar with his work, giving fans even more reason to pick it up.

You can buy the 2 disk edition of Words at Pip’s merch shop here or download the performance on its own here.