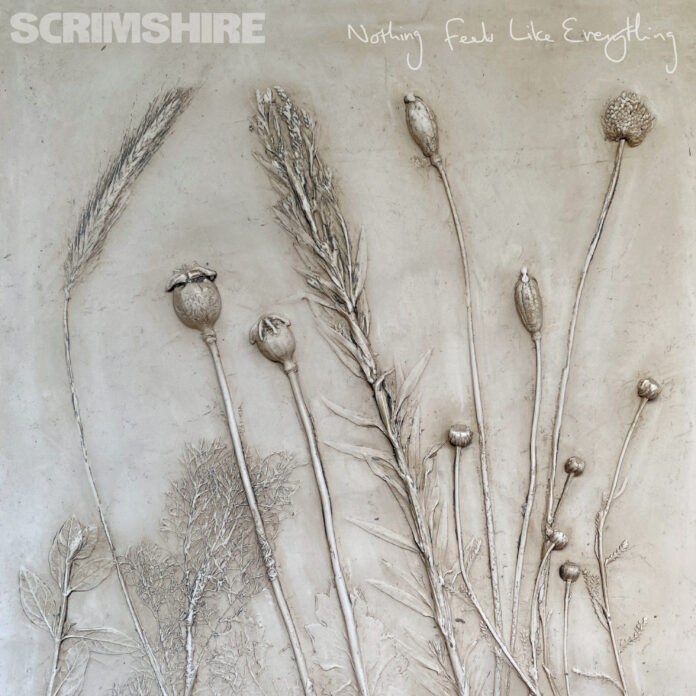 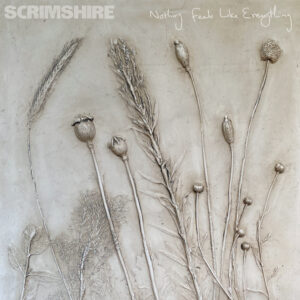 Scrimshire’s atmospheric and orchestral sixth album, Nothing Feels Like Everything, is more reflective and laid back than its predecessors. Featuring outstanding collaborations, it’s a fusion of jazz and soul that absolutely hits the mark. Gordon Rutherford reviews for Louder Than War.

Inflation, fuel shortages and spiralling energy prices. Empty supermarket shelves and systematic failures within the country’s biggest police force. The poison of racism as endemic as ever. Incompetent political leadership steering us ever closer towards the rocks of economic and social catastrophe. Nineteen-seventies or twenty-twenties? This is a music review, not a political feature, but I highlight the above and draw the comparison between the respective decades for two reasons.

Firstly, Nothing Feels Like Everything, the new album from the uber-talented musician/songwriter/producer Adam Scrimshire, smacks of much of the great soul/jazz music of the seventies (and, at points, the sixties too). There is a thread that is woven throughout this collection that is absolutely redolent of that decade. Yet, at the same time, it’s as fresh as this morning’s milk. There’s a great line from The Sopranos when an irritated Tony spits “remember when is the lowest form of conversation”. Rest assured, this album is not a ‘remember when’ throwback; at no point does it come even close to kitsch or retro. Instead, it sounds contemporary and modern; absolutely of the times and for the times. The seventies’ influence may be there, but these are tunes that pulsate to the angst of modern-day Britain.

The second good reason to draw comparisons with the seventies is all to do with the power of protest. Edwyn Collins once lamented that there are “too many protest singers, not enough protest songs”. However, it wasn’t always that way. In response to centuries of injustice, musicians, particularly Black musicians, produced some of the most incredible pieces of social commentary in the early seventies. Think of the mighty works of Marvin Gaye and Stevie Wonder. The centrepiece of Nothing Feels Like Everything is a protest song of that ilk. Similar to SAULT’s potent and prolific output, particularly on Untitled (Black Is), The Pile is an impassioned, powerful song that eloquently, thoughtfully and directly addresses the issue of black oppression. It’s a protest song for today, a quite wonderful composition that exhorts the need for immediate change.

This collaboration between Scrimshire and UK jazz and soul legend, Cleveland Watkiss, is an astonishing eight minutes of music. Imagine a song that is sung by Curtis Mayfield, with lyrics by Gil Scott Heron and music by Bobby Womack. Yes, it’s that good. As always, Watkiss’s sweet soulful voice is an utter joy to behold as it floats above Frank Moon and Bev Lee Harling’s exquisite string arrangement. Underpinning the whole thing is Scrimshire’s infectious bassline. “The more things change, the more they stay the same”, proclaims Watkiss. “How could you not notice who sits on the bottom of the pile?” Seventies and twenties. Different numbers, same problems. It’s a contender for the year’s finest song, not just because of the potency of the message. It possibly qualifies for that epithet purely on a musical basis.

Fittingly, The Pile announces Nothing Feels Like Everything. As well as being the album’s opening track, it was also the single that preceded the album. What a way to set the scene. It’s a lofty platform, but, incredibly, Nothing Feels Like Everything manages to maintain that standard throughout the remainder of the album. It never falters, not a single misstep. As we move through the following tracks, it may not be as overtly visceral, but the quality is sustained.

Nothing Feels Like Everything is Scrimshire’s sixth album. We shouldn’t be surprised, therefore, to discover upon listening that he has evolved. Last November (on Black Friday if I recall correctly), in these very pages, I described his 2020 album, Believers Vol. 1, as a “feelgood album”. And it was. It was a gorgeous fusion of nu-soul and contemporary jazz that was perfect for the moment. Conversely, the entire vibe around Nothing Feels Like Everything is different. Believers Vol. 1 was warmth and optimism and hopefulness – precisely what we needed going onto a winter of locked-down discontent. Now here we are, post-lockdown, and Adam Scrimshire has a different perspective. Hell, who doesn’t. This album forensically examines how the absence of something, whether physical contact and interaction, love or respect, can overwhelm. Isolation affected the vast majority of us. John Donne’s famous seventeenth-century poem proclaimed that “no man is an island”. It so happens that he was talking about a different kind of isolationism (hello, Brexit), but even four hundred years later, it still fits. Scrimshire’s latest album seeks to musically encapsulate all of those feelings and it does so by creating an incredibly atmospheric and moving experience. It feels introspective, self-examining. We may have danced to Believers Vol. 1, but Nothing Feels Like Everything is more meditative, giving us the space to reflect on everything going on around us and figure out how to cope.

Earlier, I spoke about the collaboration between Scrimshire and Cleveland Watkiss on The Pile. Followers of Scrimshire will be well aware that loves such collaborations, with the likes of Emma-Jean Thackray, Omar and Georgia Anne Muldrow all featuring as part of his back catalogue. This time, however, whilst eight of the nine tracks on this album feature a collaborator, there are only four vocal contributions, making Nothing Feels Like Everything Scrimshire’s most instrumental collection to date. Somehow, that seems to amplify the reflective nature of the music.

It is one of those vocal collaborations that follows The Pile. The utterly divine Heron, featuring the sumptuous tones of Miryam Solomon, represents a change of gear from the opening track. The first thirty seconds are like the soundtrack of a sixties spy movie. It’s all suspense and anticipation before Scrimshire’s Spanish guitar takes over. Solomon’s voice, like pure honey, joins. The combination – the voice and the articulately picked guitar – is reminiscent of the kind of folk/jazz served up so brilliantly by Terry Callier in, you guessed it, the early seventies. The track develops into the coolest, most laid back slice of bossa nova this side of Rio. It’s pure smoky, late night club before it breaks again; conjuring up images of a split-screen with two far-flung lovers tiredly chatting on a long-distance telephone call.

Heron leads into our first instrumental, the first of two featuring Soothsayers’ Idris Rahman. In Circles is an elegant, grandiose tune which continues that sixties art-house movie soundtrack feel. Rahman’s flute leads magnificently alongside sweeping orchestration. The Soothsayers horn player returns later in the album on another of the album’s highlights, Love In Dreams. Here, he brings a mighty ‘Trane-like saxophone that takes us by the hand and leads us through a kaleidoscopic garden of colour. Alongside, Scrimshire’s synthesiser is warping and bleeping wildly. There is incredible depth to this particular composition, as, like strata, sounds layer upon each other. It’s kind of chaotic, yet never anything but controlled. Just before the four-minute mark, the song hits its crescendo with the melody ascending repeatedly as Rahman takes us to the celestial heavens, quickstepping all over the top. It’s a breathtaking composition from Scrimshire and Rahman that has been captured perfectly here.

Horns play a pretty significant role on Nothing Feels Like Everything. Flipping back to side one, we have I Hear You, I See You, featuring the distinctive soprano sax of the great Nat Birchall. His melody playfully dances all over this tune, like pipistrelle at twilight. Scrimshire’s Latin percussion nails the track down, whilst Faye Houston’s spiritual vocal serves the song selflessly. Dramatic orchestration introduces the following track, the cinematic Within Without, before Jessica Lauren announces her arrival with a crashing chord on her Fender Rhodes. I love that particular keyboard’s unique, bluesy feel and it is in the hands of a virtuoso here. Whilst Lauren thrills us with that distinctive sound, Chris Boot lays down a dazzling, almost military-like beat, on the kit.

Boldly features Ursula Rucker, deviating between spoken word passages and soulful vocals as she delivers an uplifting, encouraging message; imploring us to “keep moving forward”. Musically, it’s stripped back and minimalist, relying on Scrimshire’s keyboards. The beautiful and dreamy Morning Affirmation is equally pared back. It’s also the only track on the album where Scrimshire does it all. Album closer, Discussion, features Pie Eye Collective, fresh from the release of their debut album, Salvation, on Albert’s Favourites last month. In case you are unaware, Pie Eye Collective is the project of sound scientist Matthew Gordon and he brings eerie, otherworldly electronics to accompany Scrimshire’s faraway Fender Rhodes. It has the feel of a Kid A/Amnesiac-era Radiohead track and is the perfect closer to Nothing Feels Like Everything. The vast spaciousness of this piece acts as the perfect invitation for us to reflect one more time.

This review began with a comparison from near history. That’s relevant because Nothing Feels Like Everything evokes the music and the messages of that era. However, it is categorically an album for today; one that gives us the space and encouragement to reflect on the current events and issues we face in our daily lives. Moreover, it’s a technically flawless album and whilst that description can sometimes make the music seem cold, this collection isn’t. Every note transmits authenticity and warmth. Expertly fusing jazz, soul and elements of folk, with those perfectly conceived and executed collaborations, Nothing Feels Like Everything should be on everyone’s list to check out. Because adding this to your life will make the coming winter of discontent feel a little bit warmer.