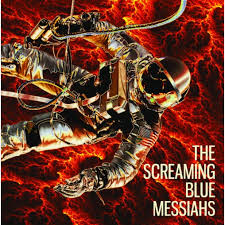 Box set of the works of 80s Blues Punk pioneers the Screaming Blue Messiahs, comprising all of their four LPs and single tracks, plus a live set from Zurich taped in 1989 and a “live in 1984” 7 inch single….Ian Canty finds one shit-booting rock n roll band lost in Wussville 1980s UK……

British Rhythm and Blues has proved remarkably durable over the years, changing little by little along the way but always retaining its core values of stripped down, frenetic mayhem. Starting out at the end of the 50s into the 60s the flag-bearers became the mighty Pirates, who thrived after their fallen leader Johnny Kidd was spirited from this mortal coil. Ten years later four thuggish dudes in cheap suits lit the blue touch-paper for Punk when Dr Feelgood’s full throttle, no nonsense version took UK Rock back to its base roots and inspired the Count Bishops and Eddie and the Hot Rods to carry on the torch. From there it was a short leap to the Pistols, but then onwards the Blues was generally looked at as passé and it took a back seat with only really Nine Below Zero’s near-Mod mayhem to sustain the faithful.

The early 1980s were hard times therefore, but there were stirrings across the pond with the brilliant Gun Club zeroing in on a Punky version of that Voodoo rhythm, taking things a little more “Backwoods Blues” direction than the Cramps who also dabbled. The UK had to wait a while, to the middle of the decade in fact, for their latest contenders. The Godfathers had an unbeatable live show and were like the Kray Twins coming on as Johnny Thunders’ Heartbreakers, but beating them to the tape were some Beefheart-crazed, blues-wailing Rockabilly Punks, yes the Screaming Blue Messiahs, whose full story is told on this lavish and well-merited boxset.

A dry run as Motor Boys Motor (named after a 101ers song – another Strummer link was that after the name switch to the Screaming Blue Messiahs they were compared to the Clash by none other than Mr David Bowie himself) only yielded one single and album, but in 1983 Bill Carter stepped into the role as band leader determined to make up for previous failings and that this time round they truly made their mark. The red-hot rhythm provided by Chris Thompson and Kenny Harris was already in place and the Messiahs were ready to Rock, Roll and preach to the soon to be converted. Arriving fittingly on the Proto Punk/Pub Rock label of choice, Big Beat, the mini-LP “Good And Gone” was a wild ride from beginning to end and compulsively enjoyable too. All of the frustrations of the previous band were poured into a compelling, explosive set. The legend on the back said “produced by Vic Maille” as if to ram home the point that your new Rock n Roll overlords had arrived and laid waste to the scene.

Carter sounds positively insane intoning the story of “God’s little Elvis” on “Tracking The Dog” and if “Happy Home” musically quotes from the Stones “The Last Time” the Messiahs take it to a much darker and bloodier place indeed. The Swamp Stomp on “Someone To Talk To” and the rockin’ guitar meltdown of the title track means it all added up to one hell of a perfect storm. Like the next two albums this is presented here as an “Extended” version of the original LP with other tracks slotted in at the most relevant juncture. The four contemporary live tracks hammer home the point – here was one band not to be taken lightly. Short, fast and brutal – just what was needed in 1984.

It was inevitable after the rabid critical response to “Good And Gone” and the fiery live shows that followed in its wake that major labels would soon be sniffing around and Warners became the lucky recipients of the trio’s signatures in 1986. Soon their second album “Gun Shy” emerged on WEA and this platter saw them share some common ground with the Fall – Carter appearing as a bug-eyed cross between Mark E Smith and 999’s Nick Cash (and lets not forget what a superior guitarist that man is) and the Screaming Blue Messiahs’ streamlined “Modern Rockabilly” bore some comparison to the later Rough Trade material of the aforementioned outfit. “I’m Mad Again”, with Bill manically ranting like he’s got a prickly heat itch whilst the band thrusts onwards did seem to share some space with the likes of “Rowche Rumble”. Though perhaps slightly more polished than their debut, “Gun Shy” manages to capture the essence of the band, bass and drums providing the ideal bedrock for Carter’s guitar meltdowns (which he utilises sparingly but always, always at exactly the right time), providing a paranoid, pounding Blues Punk title contender.

That they excelled in the live arena is made totally apparent by some of the thunderous bonus tracks here (also included is the very fine “Twin Cadillac Valentine” EP), though of a far more orthodox construct than the Birthday Party for instance (who were among quite a few bands in and around that time to use the prime Blues howl as a jumping off point) they were obviously highly exciting in performance with their fiery and unpredictable nature. “Someone To Talk To” absolutely rips the face off the stupid “New Pop” and gleefully stuffs it down the khazi – they must have been incredible to behold at the ULU that night. Way too hot to handle.

Soon after their next long player “Bikini Red”, the Messiahs were big news as they hit the charts with “I Wanna Be A Flintstone”. This ode to Fred, Barney, Wilma and Betty hooked the nation as an irresistible novelty and duly made the top 30. Ironically this number was originally issued on the forgotten Motor Boys Motor album as “Here Come The Flintstones”. This led to the kind of situation where you have to ponder how much a “hit record” actually helps or hinders a band, because they became in common parlance to be “the Flintstones guys” whereas that was just a very throwaway aspect of the band.

The album itself was a little step further into the commercial strata for them but they managed to retain the guts and mania that made them special as well as exploring some different areas to the previous records. The title track recalls the Jesus And Mary Chain’s “stoned Beach Boys” vibe and “All Shook Down” puts rock through the mixer, to the Gang Of Four and back again in fine style. While “Sweet Water Pools” is almost a “pop” version of their original sound, the likes of “Lie Detector” and the brilliantly titled “Jesus Chrysler Drives A Dodge” shows that real fire was burning bright in them still. All looked rosy for them at the time, but that was soon to change irrevocably for the worse.

By the time of “Totally Religious” the band had switched from WEA to Elektra. Unfortunately it would turn out to be a marriage made in hell: the album was swiftly withdrawn from sale and the Screaming Blue Messiahs split up shortly afterwards without recording any other material. Quite why the album was pulled still remains lost in the mists of time but it’s safe to say relations between the band and label had become a bit more than fraught.

Psychedelia was on the verge of a big comeback tying in with the “Madchester” scene but the Screaming Blue Messiahs’ version was something else entirely, a world away from the Raves. An altogether more frazzled, deranged type of trip was offered up by “Totally Religious”. “Mega City 1” could have produced another novelty hit for the band in the mode of “Flintstones”, but “Big Big Sky” is more typical of what is on show here i.e. a laidback rhythm section accompaniment contrasting with Bill Carter’s exaltations and guitar squall dotting in and out. It all works very well indeed, probably their most consistent LP in fact, you could even term it “Stoned Soul Music” if you like. “Watusi Wedding” is more like an update of classic 60s Garage Rock, but “Here Comes Lucky” restates the 13th Floor Elevators-for-the-80s aim that seems to be at work here with its devotional but warped view of Americana. Nearly like a British Butthole Surfers at some points, without being quite so gung-ho subject-wise.

The up-tempo “Gun Fire” is more what people might have expected of the band, but even that has a slippery, fuzzed up taste to its vigour. The following “Martian” is more straightforward, but set closer “All Gassed Up” is a fast, almost out of control sonic attack with some great guitar lines, R’n’B as only the SBM could do. A fitting finale to their recording career and puzzling as to why someone high up at Elektra thought to hook it from the release schedule so quickly.

But it is not quite the end here as we have a full live set from Zurich December 1989 as the band approached their final stages. Beginning with a slow-building, laconic “Wall Of Shame”, the Messiahs methodically build up a head of steam – keeping the tension on a razor edge before the release of a freewheeling “Sweet Water Pools”. The rhythm section of Thompson and Harris could be overlooked with the focus on the manic Carter, but they’re a lean, relentless machine, able to employ surges of pressure at just the right time. The link between the trio is almost telepathic at times. In this environment “Four Engines Burning” becomes a drawn-out, hair-trigger venture into the underworld – it is truly mesmerising. The fried “Modern Rockabilly” of “All Gassed Up”, segues into a sizzling “Twin Cadillac Valentine”, though the band were entering their terminal phase you would not know it from the freshness of the performance here.

This boxset from Easy Action finally does justice to a band that had been rather forgotten about as the years went on, but one that kept a bright light burning for scratchy mayhem and the UK R’n’B sound alive in the 1980s in their own special way. A handsome box houses the CDs, a 7″ inch single of live tracks dating from 1984 plus a large booklet including an in-depth interview with Bill Carter about the history of the band. It brings everything together the band recorded as well as unissued live material, which will be a positive boon for the fans and an eye opener to anyone who thought that Punk and the Blues only met up on the first White Stripes album. The Screaming Blue Messiahs can finally take their place in the lineage of great British R’n’B which runs from the Pirates through to Dr Feelgood and stand shoulder to shoulder with them both as one of the key bands to have ever picked up the Blues in this country.