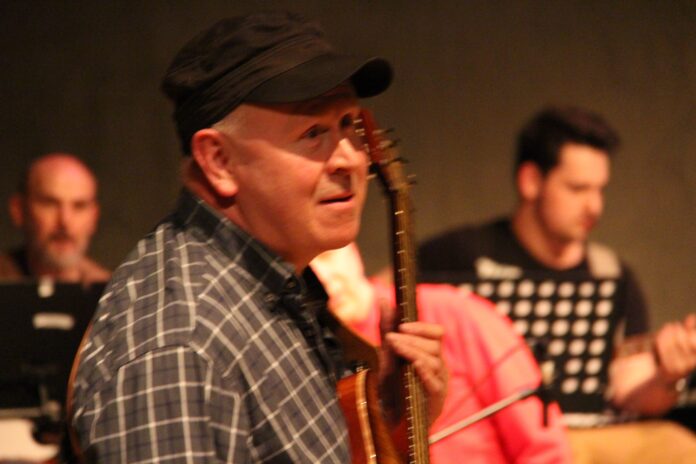 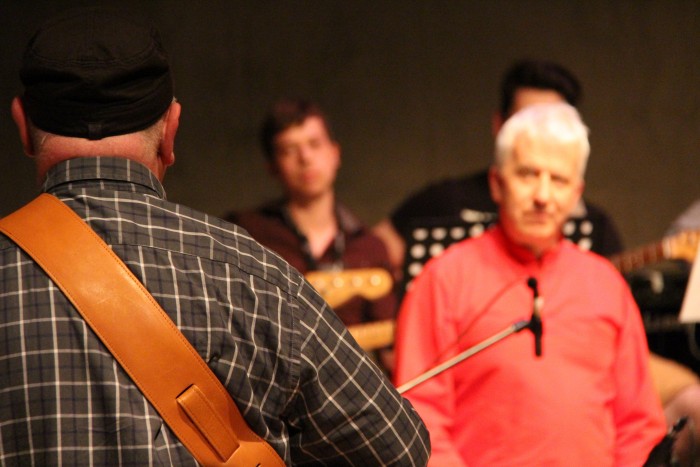 Scratch Electric are a 20-odd piece guitar orchestra featuring composer Adrian Lee’s Ludi Quartet, Portishead guitarist Adrian Utley and a host of musical talent from across the East Midlands. With an evening of minimalist fare in prospect (including a performance of Terry Riley’s In C), Louder Than War’s Stephen Murphy went along, in the hope of witnessing something uniquely wonderful.

The Space – an austere, polished concrete art installation, er, space within Nottingham Contemporary, is without doubt the perfect venue for tonight’s gig by Scratch Electric.

An evening of guitar-based minimalist music would just be out of place in the sticky blackness of say, Rock City, or the velvet opulence of the Theatre Royal or Playhouse. This type of music cries out for a slate grey blank canvas on which to reveal and assert itself, and The Space meets that requirement perfectly.

Scratch Electric is a collaboration between composer Adrian Lee’s Ludi Quartet (featuring guest guitarist – Portishead’s Adrian Utley), staff and learners from Derby College and a head hurting array of eclectic talent from the Nottingham music scene.
With guitarists from Notts bands such as Kagoule, IVORYSERFS, The Golden Troubadours and Hhymn (to name but a few), it’s a real collection of the could-be and should-be famous, and makes for a truly enticing musical prospect. 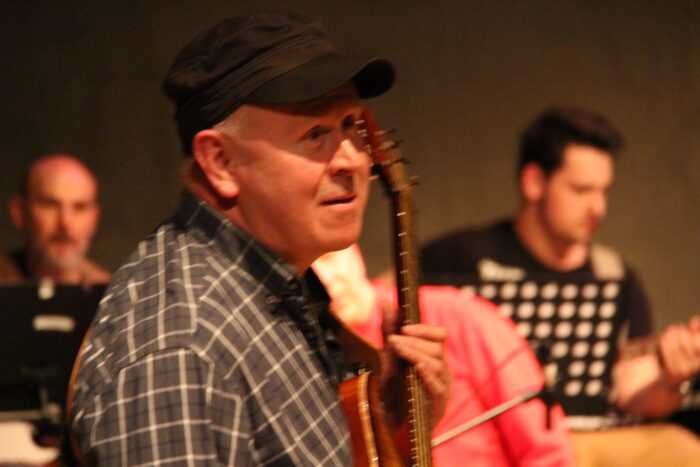 With a backing track of multilayered guitars, there’s an intricate interplay of rhythms and textures which sooth, sadden and excite in equal measure – mirroring the passing of time and the peaks and troughs of everyday existence. Perhaps because part of Steve Reich’s composition was sampled by The Orb on Little Fluffy Clouds there’s also a moment where I’m instantly taken back to the sweet smoke-laden slacker afternoons of my university years. Christ! An absolute musical Proustian rush. 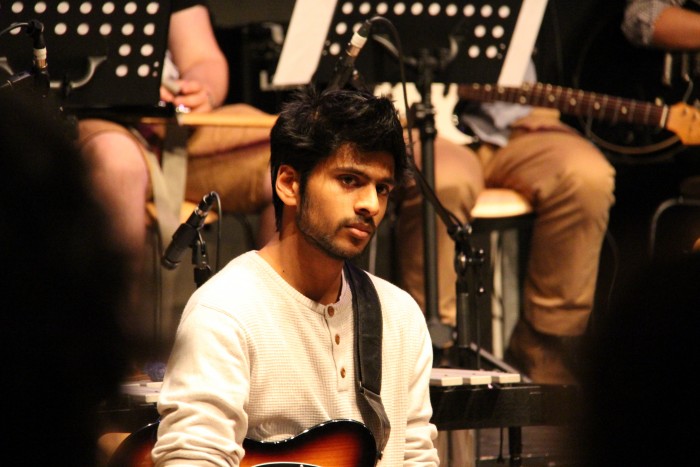 The whole Ludi Quartet strike up next to perform Philip Glass’s Quartet no.3 (Mishima). Paul Schrader’s 1985 film Mishima: A Life in Four Chapters, from which this music is taken, is an under-seen masterpiece, but it’s only when hearing the soundtrack in isolation, re-jigged for electric guitars by Adrian Lee, that you realise the film would be a much lesser thing without Glass’s genius score.

Broken into six movements, Ludi Quartet manage to elicit more emotion and establish a greater audience connection in 25 minutes than a lot of contemporary bands could ever dream of. The final movement – Mishima/Closing, is so beautiful and haunting, that I’m (seriously) almost brought to tears. 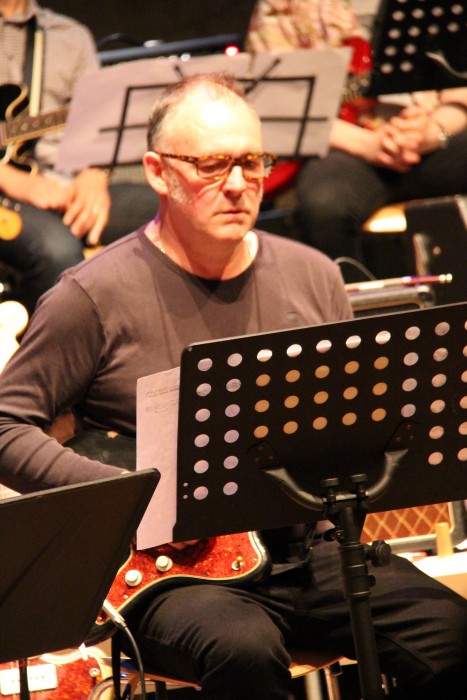 For a track that was completed only hours prior to its first public airing, Scratch Electric is a thing of wonder. Described in the accompanying press release as using ‘Balinese gamelan inspired cyclic musical structures and interlocking rhythms as the basis of creative interaction’, as a non-musician, I have no idea what that means, but what I do know is, my mind has been well and truly blown.

Part Chinese opera, part U2 when they were remotely relevant, Scratch Electric is everything you want music to be. An inventive exiting soundscape, where multi-genres of music rub along in harmony. At one point it even sounds like The Cure attempting to recreate Angelo Badalamenti’s soundtrack to Twin Peaks – a sleazy decedent highpoint to an already brilliant piece of music. 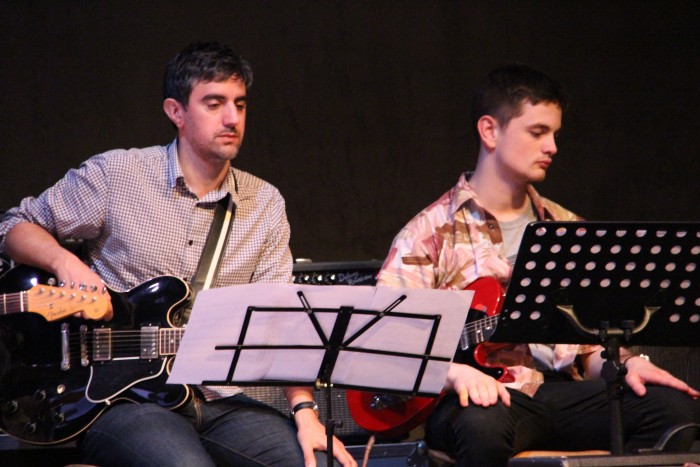 Terry Riley’s In C is perhaps the best known work to have come out of the minimalist music movement.

Allowing for endless permutations and re-creations, In C gives each performer within a group a choice of 53 musical phrases. Each phrase can be played for as long as the performer wants, but when they stop, they have to move on to the next phrase. Imagine 20 odd performers all doing this, and you’d think the result would be chaos, but holding it all together is someone acting as a metronome for the rest of the group (usefully using a piano or high pitched percussion). Tonight’s metronome is Simon Limbrink on the glockenspiel (or some such), and with a performance that could potentially go on all night, I only hope the poor chap’s wrists can take the repetitive trauma that’s about to be meted out.

Because of the nature of it’s construction, In C is an ever-changing beast. One moment, all is calm, the next, it’s like having root canal surgery performed by a nutter with a Black and Decker hand drill. Tonight’s performance promises to be no different.

For the first 10 minutes or so, Scratch Electric’s version of In C is a rather beautiful affair. Almost hypnotic, the music places you in a a sun-filled garden, with dappled light coming through the trees, and a faint breeze whispering in your ear. As quick as a flash, though, you’re suddenly in medieval England, with some lute playing bastard trying to off you with a crossbow. As well as pure mood alteration, this performance of In C also has passages of music that sound like the pomp of Vangelis one minute and the twang of prime Ennio Morricone the next, and it’s in these moments that it’s a pleasure and a privilege to be in the presence of Scratch Electric. However, In C is a marathon not a sprint, and even after 45 minutes, it’s clear the performance isn’t nearly over. Not by a long chalk.

Like the best art, In C instills strong emotions both positive and negative. After a joyous opening three quarters of an hour, there are moments of droning and oppressive repetition that feel like an evilly conceived test of character. For a time, it feels like all hope is gone, and that the sun will never shine again, but then, like a break in the clouds, a burst of musical genius lifts the dark, dark mood and all is well in the world again.

In C is truly the musical equivalent of an epic Stewart Lee joke which starts off funny, and then though sheer repetition and length becomes less so, but by the end you’re shitting with laughter again. 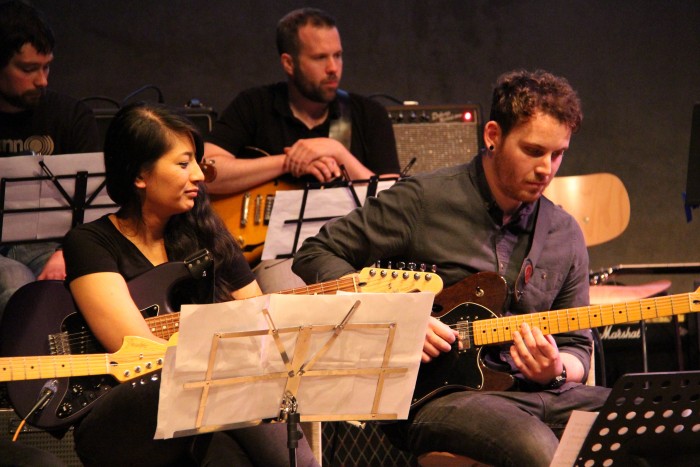 As the final notes fade, and Scratch Electric take their well deserved applause, it feels like something truly special has taken place. Hard work at times? Gruelling even? Certainly, but also life affirming and soul nurturing. Tonight’s gig is something I’ll be thinking about and chewing over for a very, very long time to come.