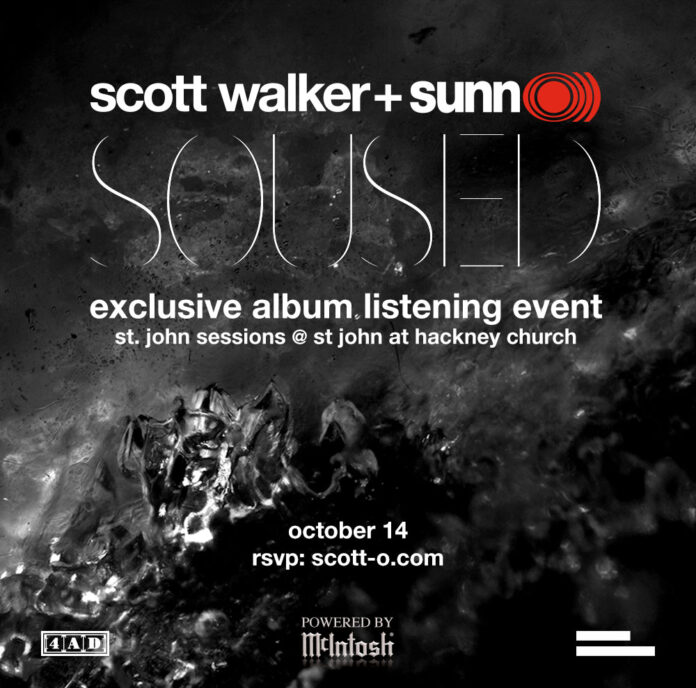 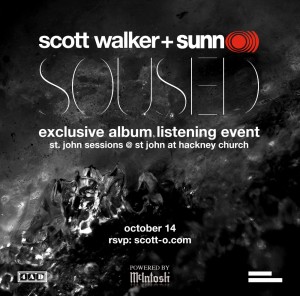 Louder Than War’s Paul Margree gets an early taste of the heavy heavy monster sounds of Soused at this listening event in London.

When the news was announced back in July that Scott Walker and Sunn O))) were collaborating on a new record the yodels of pure pleasure from underground heads were leavened only by the realisation that pairing up these two titans of experimental bleakness made so much sense that it’s a wonder no one had thought of it before.

Stephen O’Malley’s down tuned doom mongers had approached Walker before, back in 2009 when they were working on Monoliths + Dimensions, but that suggestion was nixed by the avant crooner before it ever reached the starting blocks.

Soused, though, is the real deal, Sunn O))) carting their legendary back line over to Scott’s place and getting involved with team Walker to ensure this is a proper joint effort rather than some limp file swapping affair.

The album is released later this month – there’ll be a full review from Louder Than War soon – but to whet our appetites for October 20th some lucky mortals were given an early taste of Soused at a series of listening events in New York and London.

The London event is held at the St. John in Hackney, a venue already held in high regard for its shows featuring such luminaries of the vanguard as William Basinski and Rhys Chatham, as well as rising stars of the electronic underground like Helm and Ben Frost.

Things have been switched up for this, though, with the gorgeous late 18th century regularity of St John’s tricked out with a beefy ultra-high spec playback system, sitting at the front of the nave like some latter-day altar to volume. With both Walker and O’Malley uncommitted to any live shows to showcase Soused, this is the next best thing.

There’s already a queue around the square by the time I stumble off the overground at Hackney Central. That the crowd doesn’t seem exclusively made up of serious young men in black is a good thing, I think.

Wait, the doors open. Is everybody in? Two chaps in black fiddle with the rig for a bit. Now we can begin.

Brando: In with a bullet, with strange operatic intro that soon gives way to gloopy bed of distortion and sustain. The sound is rubbish at first, far too shrill but they soon sort that out. The rig is good, I think, the low end is pretty meaty It’s nowhere near as loud as a real Sunn O))) show-of course, but it’s ok, and clear enough for the distortion to not obscure everything else.

Scott is singing high, or maybe just at an awkward angle to the chords. ‘I’m down on my knees’ he sings as a bullwhip cracks behind him. ‘A beating would do me a world of good’. There’s a weird flamenco-style clapping interlude, with some sinister synths occupying the high end. A shredding lead guitar riff – from Tos Nieuwenhuizen, a member of Sunn O)))’s extended line up –  sounds like broken glass behind my eyeballs.

Herod 2014: A quick electronic bloop, then more fuzz, this time crossed with ominous howls, spluttered distorted vowels and alien screeches. These latter sounds are really weird and terrifying. Meanwhile Walker sings, almost tenderly, of a woman hiding her babies. I’m reminded of Lou Reed’s The Kids, from his Berlin album, but with a mythical, universal dimension.

This is a powerful brew, an unflinching look into abyss even more wrenching for its opaqueness. The low-end stuff – guitars, moans and sinister knocking sounds – combine with high-pitched screeches – to produce an appropriately grin soundtrack for Walker’s fractured and unsettling monologue.

But fuck me, those chords! They’re pushing against the grimness into pure sonic pleasure, the solipsistic joy of standing in front of an amp turned up to 25 and letting rip.

Bull: A right- a stomper, this. Its first section is like Black Sabbath’s Iron Man. There’s another refrain – Bump for Bee King? – I have no idea even though it’s every other line in the verse.

Three songs in and there seems to be a common structure appearing. Heavy drone guitars, underpinned by ominous bumps and clangs, creating a claustrophobic sense of oppression. Often these drop out into a vast emptiness, allowing Walker’s voice to cry out into the void before the whole thing starts again. The pieces seem to be deliberately built as distinct movements, which rub up against each other as they’re deployed.

Perhaps the fairly quick gestation period of this record is why, on first listen, it seems to lack both the confounding moves of Walker’s previous recordings and the scorched earth blast of Sunn O))) at their most unfettered. Despite their best efforts, in combining the collaborators seem to have lost some of their idiosyncratic power.

But hang about, here’s Fetish: definitely one of the more “out-there” tracks. There are scrapings and ambient rumbles, and sounds like an oil drum being pummelled. There’s trumpet, bursts of synth. Electronics. ‘Cling away little brute,’ coos Walker. Things are getting nice and weird as a machine-like cutting noise strafes the room. There is intermittent heaviness. Suddenly the rock dynamics kick in and for about 10 seconds it’s like some inanely pummelling later-era Fall record, with better enunciation, obviously.

For all the fearsome chords it’s the weird squeals on these tracks I find most disconcerting. They’re back again here, pterodactyls from a ruined planet here to peck out your eyes.

I’m enjoying all this but it does seem a bit … audiophile. There’s no applause between songs and the audience are sitting very politely in rows, expressionless. This listening is a serious business. Suddenly at the front someone gets up and starts moving and swaying. Two members of staff scuttle over and tell her to sit down. They’re roundly booed, rightly so. After all, isn’t this what music is all about? Breaking down the barriers. Losing yourself. Seeing the world in a new light. Ooops, sorry mate, not here.

As if by magic, Lullaby starts. ‘Tonight my assistant will pass among you.’ Pulsing electronic clicks. ‘His cap will be empty.’ Is this a conjurer, a trickster, a minstrel? ’The most intimate personal choices and requests central to your personal dignity will be sung’. It has a hellish chorus, Walker singing against a dissonant synth cluster while a three note bass and get riff thrums like an extremely pissed off bouncer. By the end, only Walker’s voice and a lonesome pulsing synth are left. ‘…will… be …sung,’ he almost whispers, exhausted, a ghost, a shade.

And that’s your lot. For all of their seeming diffidence, the punters seem to have enjoyed it, whooping and hollering before cruising out in the Hackney night.

Is the record any cop? I think so, but on just one listen it’s difficult to tell. It’s definitely pretty good  – a stunningly realised artistic statement with an uncompromising aesthetic and an unrelentingly bleak view of a world shattered by greed and violence.

I can’t say whether Soused will be as central to Scott Walker and Sunn O)))’s discographies as some of their previous artefacts – The Drift and Monoliths + Dimensions in particular.

But I’m pretty sure it will shit all over most other records by most other bands released this year. A telltale sign of a great – or potentially great – work of art is the way in which it yields up meaning long after it has been ushered into the world. I have a feeling Soused will be freaking people out for a while yet.