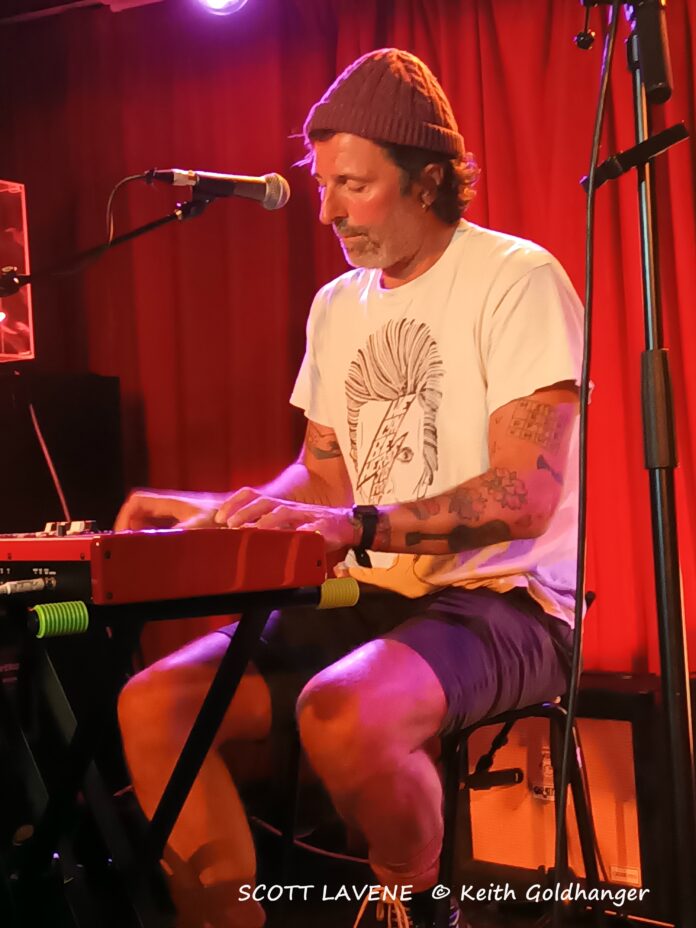 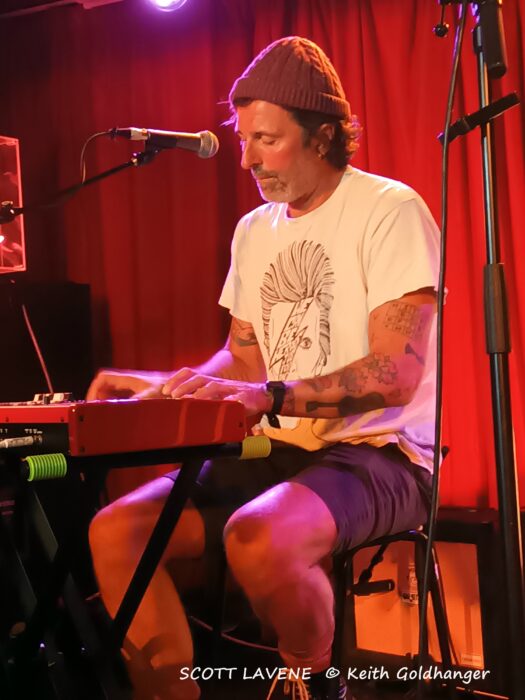 Scott Lavene has recently released his second album. Keith Goldhanger wanders along to see him perform in the flesh to play the songs introduced to him during the days and nights when we couldn’t go out and experience any live music.

Paper Dress Vintage doubles up as a vintage clothes shop during the day and is one of East London’s most unique venues. They’ve improved the small outdoor space around the back of the building since we visited last and it now feels like walking into someone’s back garden for pre gig refreshment before walking upstairs where there seem to be more Hawaiian shirts on display (hanging from the ceiling) than we used to witness at Gallon Drunk gigs in the early 90’s.

It’s a very decent venue and tonight we’re here to witness Scott Lavene who is here to perform his punky, poetic and humorous hits from his first and (new) second album Milk City Sweethearts to a packed room of curious onlookers ready and willing to listen quietly, sing along when prompted to (even though many of us may not have heard some of these songs before) and be thoroughly entertained by the short trousered man from Essex.

Scott writes and sings sad, tragic songs that will make many audiences laugh. The subject matter seems to come from his own life experiences;  Falling in love, taking too many drugs whilst working in a factory, drinking too much whilst working in a pub, being too thin to get a job as Santa,  getting into a fight in a Billericay Chinese takeaway whilst trying to protect an innocent woman from being groped, falling out of love when least expecting it, falling in love again, falling out of love again, taking more drugs, drinking more, not having any money and imagining being like a worm so your bottom half could go down the shops whilst your top half can sit around watching TV all day.

He begins by gently strumming his guitar along to the drum machine from his Yamaha keyboard and is joined a few songs in by the superbly talented saxophonist Jamie Anderson who it’s mentioned has also played with Wet Wet Wet and probably loads of other acts our parents would have heard of. His involvement is modest, not overpowering yet essential in making this an hour of intriguing and compelling entertainment.

Audience favourite Broke arrives halfway through, some know the words, some laugh along for the first time and will have their minds blown once they get to listen to the recorded eight minute version when they get home. Lord of Citrus is stripped down to its bare bones yet is still fabulous and as he tears through his tunes one by one we get to realise that if these stories are probably from real experiences lifted from his time on this planet then he may still have plenty more subject matter hidden away to explore and reveal at a later date.

Scott comes across as slightly venerable yet a survivor who can still see the funny side of his life and through all this material we learn that Scott is simply Scott and that’s what people love about the man. We get the impression he’s been on a rather long eventful journey and many of us are only just starting to catch up with him now that he seems to be providing us with the highlights, low lights and one or two observations we can all associate ourselves having been in or near ourselves. He has more than one song about falling in love and buggering it up again and again and again, spending too much time on his own as well as striving to find a way to maintaining a balanced life. His new album is full of great poignant, funny and sad songs that display the man’s great writing talents. At times he’s David Bowie, Syd Barrett and Ian Dury at the same time. His croaky voice eventually hits any high notes required and his spoken delivery maintains everyone’s attention. He sits at a second keyboard for a ballad or two, doesn’t need a full band, and seems happy to have us singing the odd line that comes our way whilst sharing the disappointments he may have suffered whilst continuing to keep his chin up and chuckle at the absurdity of it all.

We’ve all got stories to tell but Scott Lavene is managing to entertain those who come along to be entertained with subject matter that takes the listener on a journey many of us may have been close to experiencing ourselves but stopped for a few rests along the way.

It works well because he seems to be looking back on any excess periods of his life and he appears to still be surviving without being too judgemental on himself.

The results are pieces of music with stories attached that everyone should spend at least one evening being entertained by. A great evening highlighting some great work this man seems to have been responsible for in more ways than one.

Words & photo by Keith Goldhanger. More writing by Keith on Louder Than War can be found at his author’s archive. You can also find Keith on Facebook and Twitter (@HIDEOUSWHEELINV).