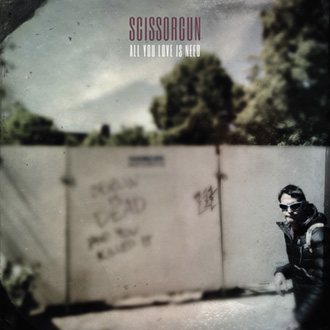 Scissorgun – All You Love Is Need 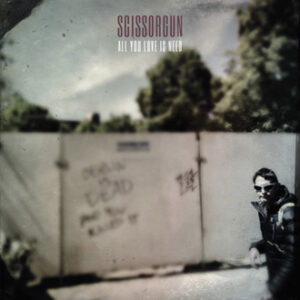 New album from Scissorgun, the duo of Alan Hempsall (Crispy Ambulance) and David Clarkson (Special Bazaar). This is the follow up to their debut 10 inch Assault Two from 2017… LTW’s Ian Canty monitors the ‘Gun’s new raid.

Scissorgun were formed in 2016 by the pairing of David Clarkson and Alan Hempsall and first impressed me with their mini-LP Assault Two (reviewed here). Definitely a trip through a wide range of sound, the record was successful in that whilst being very experimental, it was also engaging and enthralling for the listener too. In the time since that record they have supported both the mighty Wrangler and Wolfgang Flur (ex-Kraftwerk) in concert. Those two will give you a fair idea of where Scissorgun’s intentions lay, that is electronics with heart and soul.

Now Scissorgun are back with a full length album with the detourned Beatle-punning title of All You Love Is Need. This record is again on their Aural Assault label, which also issued the first Crispy Ambulance single way back in 1980. Of course Alan Hempsall was/is a mainstay of CA and though. Scissorgun got their name from one of that band’s LPs, they are a different kettle of fish entirely.

The electro big beats of Terminal Velocity sees us into All You Love Is Need, this is very much an intense dance number that shares a little with Cabaret Voltaire’s mid-80s output. The paranoia and sense of claustrophobia in the refrain “No no no you never make a getaway” is compulsive and set is against a groove that gets one’s feet moving. We’re off to what can be termed a flying start.

Terminal Velocity segues into straight into Salvia, an austere synth atmosphere lightened with glistening guitar notes, before a busy beatbox ups the pace. An instrumental with samples that is as filmic as anything on Assault Two, it harks back to that record’s wide spaces and meditative feel. Sub-Continent follows the outro wobble and whistles of Salvia, again going into the next song so there is a feeling of continuity in the first three tracks. This mean the opening trio of tunes do come over as part of a whole, rather than separate songs. Gentle swirls and stepping electro percussion is again offset by an echoing, spiky guitar. There’s a sense of stillness despite movement, as the rhythm propels ever-onwards, until it reaches a treated voice/church organ fade.

Next comes Station Drift Pt 1, which is followed later on by its second section. These are shorter pieces, with the first ensuing with a Morse code buzz and machine noise, before a chiming drive emerges and then drops out to the noises again. It comes back with a wordless chant buried deep down, before checking out again. Then comes Forensic Dub, with sirens and a muffled voice, again the Cabs come to mind on another piece of near-industrial electronic dance. There are though some agreeable Keith Levene-type guitar squalls, but Scissorgun always put their own stamp on things quite clearly, easily transcending any influences. This one seems to take Assault Two’s more dance-orientated material a stage further. Bruise is again very dance-orientated, almost commercial. Again they add a scat singing hook amongst distortion and electro bleeps, it is very pleasingly accomplished and memorable too.

Moving onto the second half of All You Love Is Need, Hybrid Threat has a slower rhythmic whirl and is very percussive. Synth lines bounce off each other as the vocal seems to have a touch of blues about it in an odd way, as does the guitar work which comes in mid-song. This is excellent, being moving and addictive, a real highlight of the LP. Then we have Station Drift Pt 2, which goes back to the same Morse/radio interference as the first part, but there is a bit of a more bassy sound here though, with the fragments of the song going in and out.

Dark Routines take us into the final third of the album with gentle clicks and synth drones and a robot voice and soaring guitar join in too. This is a slow and restful Scissorgun effort that shows their more reflective side, some lovely bell sounds smoothing things along. Next Pumpkin Face ratchets things up again, a fast moving acid dance number with that guitar again taking the place of vocals. Finally Double Agent brings things to an end, an eight minute epic which begins with what sounds like footsteps and water flows. Soon a delicate electronica develops, with deep unintelligible growls. Again the guitar is key here, sitting atop the static beat and providing direction amidst percussive flutters. It’s a bit like a very deconstructed,  electro version of Joy Division’s Transmission and sends the album out on a high note.

On All You Love Is Need Scissorgun adeptly flesh out the themes of Assault Two in a natural and absorbing way. Here there is a consistency with what they have already done, but not in a way that is samey in any respect. They have simply built on the strengths of their previous recordings in an intriguing way and by increasing the dance element, made their offerings surprisingly accessible. All You Love Is Need deserves to be loved.

Scissorgun are on Facebook here and their Bandcamp link is here