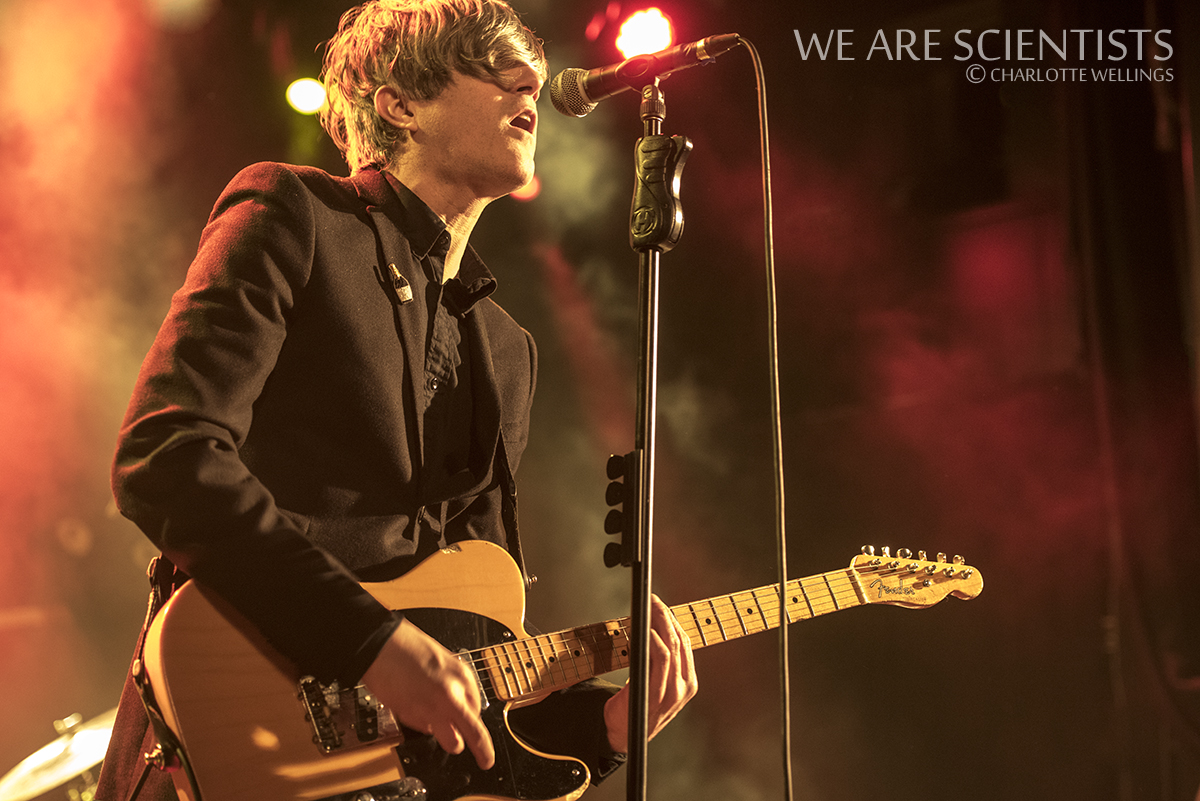 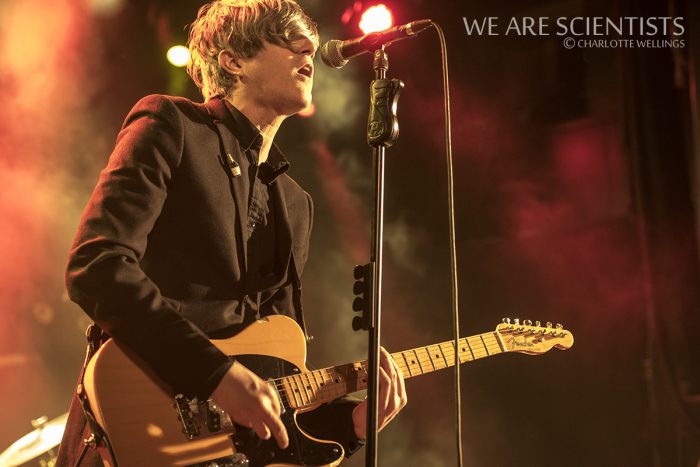 James Lowther (words) and Charlotte Wellings (photos) catch We Are Scientists play a blazing career-spanning setlist at the end of their UK tour promoting their new album, ‘Helter-Seltzer’.

I feel like it’s important for me to set my bias up straight away. We Are Scientists are one of my all-time favourite live bands. There’s just something about the combination of that 2006 indie-rock sound and their hilarious personalities that speak to me. So it’s safe to say my hopes were high.

There were just a handful of people in the crowd when The Alibi took to the stage, but boy was I lucky to be witness to them. They played a blistering set packed to the brim with hard rock tunes and impressive guitar riffs. They had an air of arrogance about them (usually reserved for bands much higher up a bill), but they weren’t obnoxious with it – they had something to prove, and by the end of their set the whole crowd was on their side. I’m sure that the Academy weren’t too impressed with the bassist climbing onto the speaker system but (thankfully) nobody was hurt. I’m truly shocked they aren’t much bigger (currently sitting at around 700 Facebook likes at time of writing), though I’m sure this tour has garnered them a lot more fans. I’m sure they could have played all night, and the crowd would have lapped every second up. I hope they continue to impress and I look forward to hearing some recorded material from them soon. 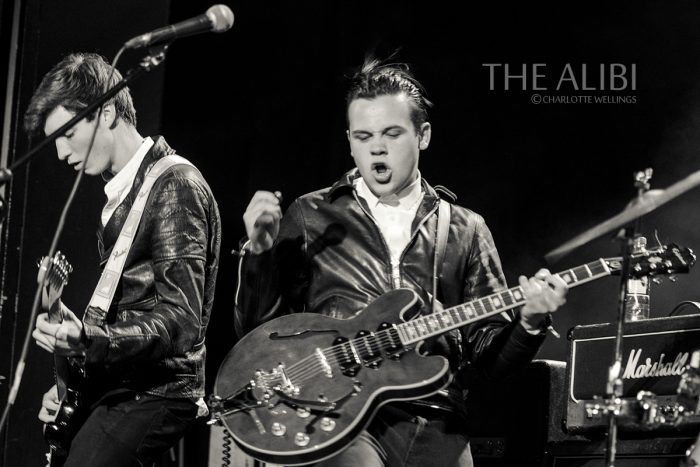 Next up was Flowers, and after the manicness of The Alibi I was expecting more of the same. So I was pleasantly surprised when the three-piece soothed my soul with some haunting noise-pop. I’ve got a strange feeling that the crowd were underwhelmed by the band, but for me it was a magical, transcendental experience. Their final track, ‘Stuck’, performed exclusively by the lead-singer and her bass, was hypnotic. I’d love to see them perform a headline set to a crowd of fans. ‘Pull My Arm’ has been a real ear-worm for me, with a tidy drumbeat and vocals that have to be heard to be believed. Their stage presence had a truly endearing awkwardness to it – I couldn’t keep my eyes off them, and there was the sense that their setlist ended too soon. 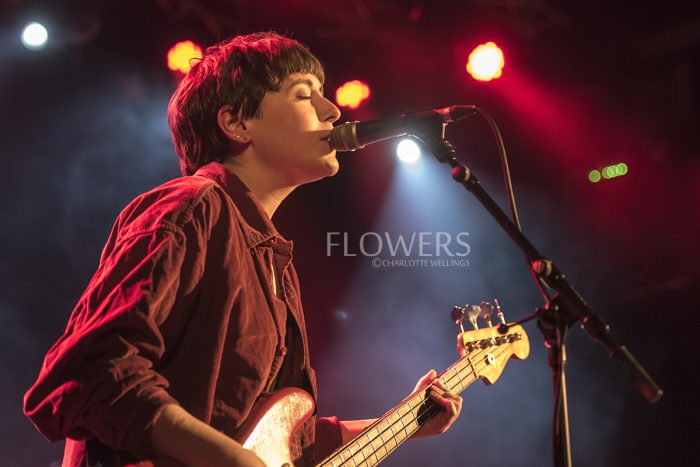 Then it was time for the main event. I can’t lie, I was incredibly excited. We Are Scientists are a band that are near and dear to my heart, and I’ve seen them many times over the years. They never disappoint. And, thankfully, they didn’t disappoint tonight either. They kicked things off with the fantastic ‘This Scene Is Dead’ and then proceeded to play a huge, career-spanning setlist.

Oddly enough they didn’t play as many songs from their new album, ‘Helter-Seltzer’, but the tracks they did play were cracking. I particularly enjoyed ‘Buckle’, a hard-rock anthem and one of the strongest songs from the new album. But luckily, that meant all of their fantastic singles (It’s A Hit was a particular highlight for me) as well as some of my favourite tracks from ‘TV En Francais’, including the beautiful ‘Make It Easy’. ‘Great Escape’ had the entire crowd enraptured and they just kept the pace going with the classic ‘After Hours’. The crowd was heaving, and for a band that have been playing these songs for 10 years now, they never sound bored at playing them – every track sparkles with the same intensity as when I first saw them 7 years ago. They’re just a real treat. 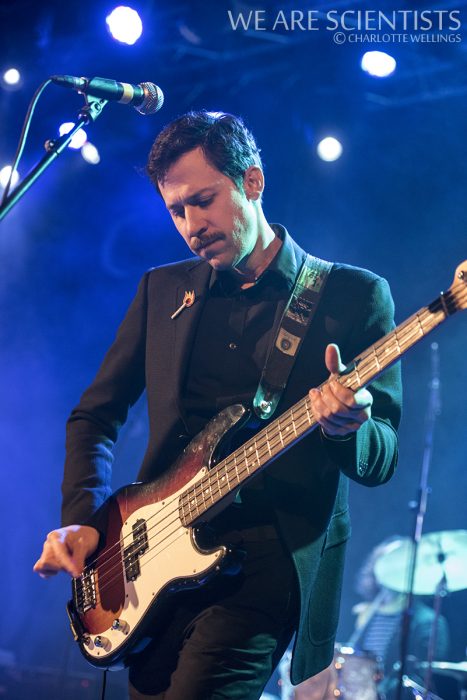 Their now infamous onstage banter was on sparkling form. There was a running joke about Chris Cain’s bass sounding like an engine, that quickly spiralled out of control to the point where the crowd were chanting for Chris to play some more engine noises instead of songs. Unfortunately, all that tomfoolery might have led to some technical difficulties right at the end of the set, as for their final song ‘Too Late’ the bass was making some not-too-healthy sounding noises. My ears ended up ringing long into the night. Not that that’s a bad thing.

I was told they’ll be back in the UK in October. And you can bet your life I’ll be right at the front of that crowd again.

Check out the photo gallery below: