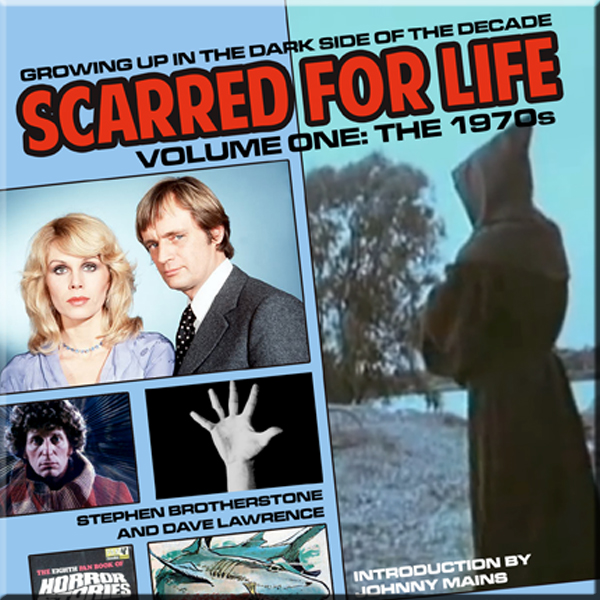 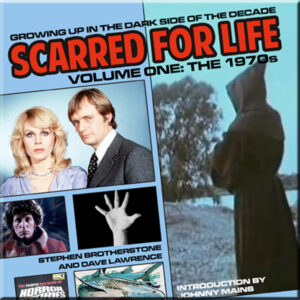 Scarred For Life is a charming look back at a time when pop culture was used to scare the living daylights out of every child and adult across the land: from scary kids’ TV shows; bleak adult dramas; dystopian sci-fi; savage horror films; violent comics; horror-themed toys and sweet wrappers – you name it, this in-depth book by Stephen Brotherstone and Dave Lawrence covers it. Matt Mead opens the creaky door of the book to review for Louder Than War.

It would appear that it wasn’t only ghost trains at the local fun fair that would make you turn a whiter shade of pale if you lived in and around the 1970s. From the dismal contrast of black and white TVs with only 3 channels – perhaps rented from Radio Rentals even, with a slot machine at the back to insert 50ps – watching TV as a family in the 70s was a completely different experience to the one we see now with hundreds of channels to choose from at a flick of a switch.

The introduction is written by Johnny Mains, award-winning horror publicist who has a long history of writing horror books including writing an introduction for the 30th anniversary of Stephen King’s Thinner, plus he has written his own book with Robin Ince entitled Dead Funny. He introduces the book with just the right amount of seriousness and sarcasm that should introduce a book all about the spooky goings-on in the world back in the 1970s.

First chapter is Scarred By Television. Some of the highlights are Worzel Gummidge, the frightening scarecrow who had the power to remove his head…without blood. Dr Who and Dr Who annuals get a look in too. Back in the 1970s, Daleks and aliens were all the more spooky on a black and white TV, that often flickered when the reception faded because of a car whizzing by the house or simply someone getting up from their chair midway through an episode. If you were lucky enough to get hold of that year’s Dr Who annual, this would bring more even more fear and dread into your dreams.

Public films were another cause for youngsters to do double takes on the playground. Who can forget the Green Cross Code with celebs Kevin Keegan and Alvin Stardust, huge perms and equally impressive sideburns dotting the land warning of the perils of crossing the road. “You must be out of your tiny minds” uttered Middlesex’s version of Elvis. Further public films covered here are Rabies Outbreak, Electricity Hazards and the iconic jerking animation of Charley the Cat series, famed for being picked up by The Prodigy in their rave anthem Charly.

Films of the era that made your hairs stand on end that are covered in the book are Jaws and Scum. I remember watching Jaws as a youngster – after watching the film I distinctly remember checking the bath and toilet for sharks. Similar can be said for Scum. Starring the likes of Phil Daniels and Ray Winston, this often brutal film shows the effects of what can happen to young boys as they are taken to a boys Borstal. This often unpleasant film really is shocking viewing even 30 odd years after it was first made – the term Scarred For Life just about sums up the effects of watching this film, if ever you have had the misfortune of laying your eyes on it. 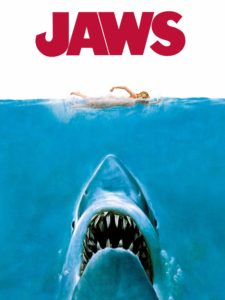 Finally there’s food. Yes food. Nowadays when you visit your local ice cream van you can expect to be greeted by a friendly smile from the person behind the counter with the options of a 99 flake or some other delicious cold one to keep the baying warmth from the tongue. Back in the 70s you’d be lucky to come away from the ice cream van unscathed, what with Count Dracula and Dalek Death Ray Walls ice creams.

This book has brought back many treasured memories for me and will be sure to do the same for many readers of a similar generation, plus it will also introduce a world far away for many younger readers who will be lucky enough never to be Scarred For life watching TV, reading a book, watching a film or eating their favourite food. Volume 2 is set to hit the shelves soon, Scarred For Life: the 1980s. At this rate, no one is safe from the publishing masterstrokes of Stephen Brotherstone and Dave Lawrence.

Scarred For Life can be found at their Twitter page. The book can be purchased here.