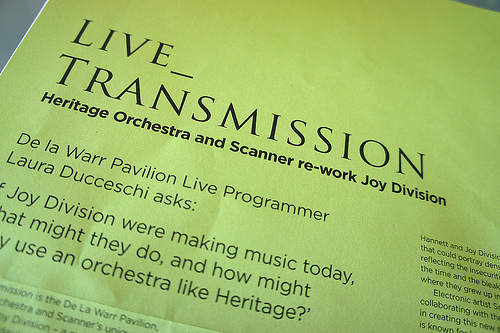 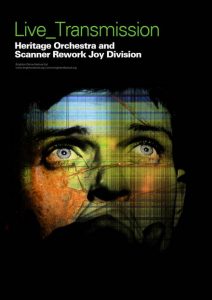 Using the latest sound design and other creative technologies (the players perform inside a giant gauze cube which is projected onto and around which the audience moves), this unique sonic and visual spectacle turns the tables on the conventional concert experience. Reflecting Joy Division’s experimental, literary and artistic expression – rather than classical interpretations or cover versions – Scanner and Heritage Orchestra pay homage to the music and signature spirit that defined the band as one of the world’s most progressive ”Ëœart’ bands.

Heritage Orchestra collaborates with present-day artists from the mainstream and experimental worlds of art and music; challenging orchestral stereotypes, encouraging new work, and engaging the public through relevance, risk, and reinvention. When devising programmes, the orchestra’s Musical Director Jules Buckley and Artistic Director Chris Wheeler look towards unlikely cohorts that stretch from electronica, dance-music, folk, rock, dub-step, hip-hop, jazz and contemporary classical – aiming to work with artists that might not necessarily have worked with an orchestra before. Subsequently, over the last decade they’ve become the ”Ëœgo to’ ensemble for innovative and exciting musical collaborations, working alongside improvisational renegades The Bays (Brighton Dome, 2008) and Massive Attack (on a live recreation of the Blade Runner soundtrack for Meltdown Festival at the Royal Festival Hall).

Scanner (a.k.a. Robin Rimbaud) is a conceptual artist, writer and musician. Exploring the experimental terrain between sound, space, image and form, he has worked with the likes of Merce Cunningham, Steve McQueen and Wayne McGregor. Since 1991 he has been intensely active in sound art; producing concerts, compositions, installations and recordings including the albums Mass Observation (1994), Delivery (1997), and The Garden is Full of Metal (1998) ”â€œ all of which have been hailed by critics as innovative and inspirational works of contemporary electronic music.