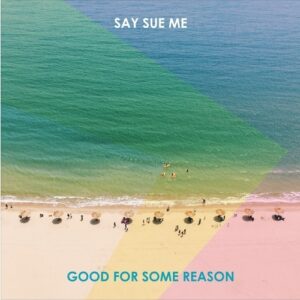 Say Sue Me: Good for some reason

Louder than War’s Ioan Humphreys samples some more insanely catchy pop from the always reliable stable of Damnably Records in the form of Say Sue Me.

Good for some Reason is the latest single from South Korea (via Busan’s beaches) Say Sue Me. The band’s practice room is located five minutes on foot from Gwangalli Beach in Busan so it’s the love of the surf that infects this band’s 90’s US indie rock inspiration. Some may call it ‘Surfgaze’ (so help me), but it sums up Say Sue Me’s sound pretty well actually.

Formed in 2012 they recorded their first album, the brilliantly titled ‘We’ve Sobered Up’ in 2014. Friends since 5th grade Jae Young (Bass) and Kim Byungkyu (guitar) were introduced to drummer Kang Semin and when they heard Sumi’s speaking voice, they decided she should be the singer.

Tragically, Semin, who also illustrated the artwork is sadly in a semicomatose state after a fall in 2016. As there is no NHS in Korea, the band, their label ‘Elecric Muse’ & fans raised over £11,000 for his healthcare and they hope he can recover with treatment. Casey McKeever now sits in on drums. They are playing a lot at home with the new drummer and about to record a new album. Somewhat expectedly, this song is the singer Sumi trying to combat negative thinking/depression.

Squealing guitar starts this track and you are thrown straight into this guitar led pop rock instant classic. It immediately sounds timeless!? The cracking guitar line that runs throughout reminds me of The Wedding Present as well as having that LUSH and RIDE vibe that I absolutely love. Noise for pop’s sake! One of their influences are Pavement and you can absolutely hear that with this track. It has a dreamy ‘Box Elder’ feel to it (which ironically the Weddoes covered back in the 90s!) and a laid back, almost horizontal feel.

It’s 2.50 of deliriously lovely vocals, instrumentation and an attitude that just wants to brighten up your day however you’re feeling. And coming from a band with such a tragic back story? I love them even more for that.

An absolute must for indie discos around the country.

Say Sue Me can be found via their label Damnably, Bandcamp, Facebook and they tweet as @SaySueMe