Home Blogs For Ourselves, For Each Other: The Say It Right Writers Circle Anthology... 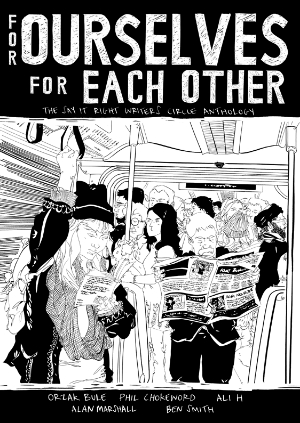 For Ourselves, For Each Other – The Say It Right Writers Circle Anthology (B/W Read Press)

Louder Than War’s Nathan Brown delves into a volume of writings from a DIY punk writing circle.

A self selecting rabble of folk from the DIY punk scene assembled themselves around the rallying call of evil genius Phil Chokeword with a year long writing project seeking to find “new ways to be creative and celebrating a DIY approach to culture.” So the Say It Right Writers Circle was born on 1st January 2014. For the next 12 months 5 writers took it in turns to pick monthly themes to work on. The protagonists were Orzak Bule, Phil Chokeword (Facial Disobedience Zine / HC band Pilger), Ali H, Alan Marshall (Pea Brain Zine / punk bands Chineapple Punx, Whole In The Head & The Shorts) and Ben Smith (Get in The Van zine). Now, I know 3/5 of this rabble so picking it up to read was a daunting. What if it’s a collection of substandard zine columns? I needn’t have worried. They chose topics as diverse as sport, work, spirituality and rebellion, and of course PUNK! They communicated virtually so no dingy basement for this gang of reprobates. The first rule of Write Club was that every month they had to write 700ish words each. Otherwise Write Club becomes Fight Club, right? These short pieces were shared among the circle and then published online. The second rule of Write Club was that you could write anything as long as it somehow related to the monthly theme and covered a variety of fiction, poetry and non-fiction.

The resulting volume with a mutual masturbatory title is a melange of poetry, fiction and non-fiction in bite-size chunks. It is also the first title of B/W and Read Press. Each of the 60 submissions is short enough for a bus journey in their own right or you can gorge yourself by reading a topic (or more) at a time. Phil’s blurb pitches it as “equal parts thoughtful and irreverent, humorous and emotionally charged”. I’d say he’s not far wrong. These witings are at times comedic, historic, polemic or fantastic. The mix of fiction and non-fiction adds an extra dimension making the whole greater than the sum of its parts, especially when some of the fiction is written first person and the tale could just about be true, if a little warped. Much of the writing is making a point, fiction as much as non-fiction. I reckon it’s a mark of the quality of writing that I kept skipping to the front to check whether a piece I was reading was fiction or not (Walter Mitty in his anarchist years?) I’m left wondering whether the fiction was a means to exorcise all those feelings of frustration, internal hatred (self recrimination, guilt) and external hatred (for bosses)? The appearance of a couple of suicides and some romantic angst occasionally veer us towards the rocks of teenage fiction but we’re pulled back from the brink by the quality of the writing and the cynical vein running throughout.

It is interesting to see how the writers were influenced by each others’ previous submissions, whether consciously or not. Some writers have characteristics that remain throughout (e.g. Ben Smith finds a suitable song lyric for use as every title) whereas others seem like they have started with a completely fresh approach to writing each time. As this collection progresses each contribution carries anticipation of expecting a twist and not getting one, or I’m fooled into thinking I am reading non-fiction until the twist kicks in. In honour of Roy from the IT Crowd I will not indicate what proportion of the 60 entries carries a twist cos that would just ruin it.

Worthy of special mention is the horror/fantasy/macabre writing from Alan Marshall, in the finest tradition of 2000AD and Tales of the Unexpected. I want to see more of Cutler the imp (I can imagine a collaboration with Slaine artists Mike McMahon or Simon Bisley!). I ought to declare bias as Alan’s one of my closest friends (I was best man at his wedding and played in a band with him for 5 years) so his work fills me with a sense of pride.

Nice cover art by Steve Larder (Rum Lad zine) sets this book off a treat. And it’s no xeroxed, falling apart, cut & paste effort. It’s properly laid out complete with Index by author as well as Index by subject, it was printed and bound by actual printers – a workers’ co-op to boot.