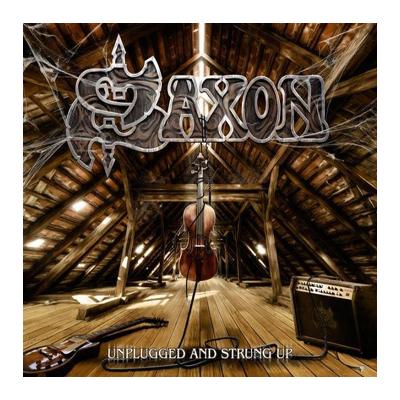 Heavy power metal gods Saxon have polished up some greats and re released them in a double CD (available also as single CD with just the “Unplugged…”) package. Louder Than War’s Halima Amin reviews.

Heavy power metal gods Saxon have polished up some greats and re released them in a double CD (available also as single CD with just “Unplugged…”) package. Brought to you in two parts, “Unplugged…” brings remixes and orchestral versions of classics whilst second disc, Heavy Metal Thunder, holds re-recordings of Saxon hits.

The double CD is beautifully presented in a wonderful fold out case that would make any Saxon fan and collector squeal in excitement-although this may be the end of their giddiness as to a Saxon heavyweight some orchestra versions of these songs have been released already and mixes of old songs are again nothing massively different.

It’s certainly an introduction but in a time where many of us are craving for a resurgence of the heavy metal scene, an introduction such as this may be deemed necessary.  It seems more worthwhile then to take the album as a bit of a noob and enjoy the tracks as semi new, particularly in this dressed up hits collection.

Stallions of the Highway opens the album up to set the pace for the exact sound which doesn’t fail, or indeed vary, on the collection. Whilst the next track “Crusader, Crusader…For Chistendoms sake, we’ll take our revenge, On the Pagan from out of the east” rings a lot like a Daily Mail headline, it could be brought to Saxons attention that the Crusades actually occurred after the Norman invasion of England, where the Baron Lords and Kings were all Norman, and taxed Anglo Saxon Serfs to their deaths. Now that would make a brilliant song.

Of the most epic sounding orchestra blends, Red Star Falling takes the crown.  Following closely on Unplugged… Broken Heroes has a perfect melodious string backing which you couldn’t imagine the song without but again, lyrics which feel very contradictory after a catalogue of war rallying.  Live acoustic version of Iron Wheels, with reference to Biff Byford’s father, is the most far reaching song on the entire collection, and with crowds echoing in the air it makes for a perfect version. Coming Home serves the first disc very well indeed at the end of “Unplugged…” leading into Heavy Metal Thunder.

Heavy Metal Thunder exists as no great achievement as viable standalone disc but works well as an economical upgrade for those, again, who are looking for a brief introduction to a hugely long serving band. The collection of tracks itself from Dallas 1pm, Motorcycle Man and Backs to the Wall aint none too shabby, but lacks any new zest that would entice new crowds or retain interest of older ones.

What would be a triumph for Saxon would include some more experimental twists and takes on past releases, or indeed some new material for the long running British heavy metal band, although judging from their record, they will be revealing new, loud and war-proud music soon.

All words by Halima Amin. More of Halimas writing on Louder Than War can be found here. Halimas website is MaceWindude. Follow her on Twitter on @MaceWindude.