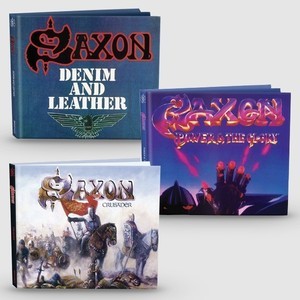 Saxon – a genuine British metal institution, regenerating their back catalogue.

With the strength of their current Thunderbolt album, Saxon, like fellow metal gods Iron Maiden and Judas Priest, are enjoying an Indian Summer that’s see them releasing some of their strongest music, yet there’s absolutely nowt wrong with a bit of nostalgia – especially heavy metal nostalgia. Even the Saxon name conjures up the classic image of a metal band. One that’s done its time from the denim and leather uniform to some slightly more arresting spandex; uncompromising and dressed in a Yorkshire accent. Alongside the Maidens and the Leppards of the NWOBHM, Saxon possibly even led the way in the early eighties, standard bearers with appearances on Top Of The Pops propelling them into the nation’s homes of a Thursday night.

Last year’s Solid Book Of Rock that gathered and celebrated their work from the 1991-2009 mid period Saxon, was one thing, but let’s set the time machine for the days when metal revival was about bullet belts, clenched fists, sweatbands and feet never anything less than three feet apart. Some would say things haven’t changed… A quick glance to the back cover reminds us we forgot to mention that other heavy metal calling card – the motorbike; the band pictured astride five probably very noisy and very metal bikes while cleverly avoiding the sexual analogies of throbbing beasts and something equally innuendo riddled between the legs..

Having set the bar with a trio of albums including the iconic Wheels Of Steel and Strong Arm Of The Law, 1981’s Denim & Leather album cemented the reputation. The title track – the line about listening to the radio every Friday night recalling the late great Tommy Vance’s Friday Rock Show for those youngsters who’ve never had the thrill…is arguably THE British metal anthem.

Together with Princess Of The Night and And The Bands Played On, Denim & Leather contains THE Saxon calling cards, yet holding together the big numbers are the likes of Play It Loud and Never Surrender, each fist pumping moments of joy in their own right. Both tracks, amongst others are added as part of the bonus features that gather together prime live Saxon from 1981. Hammersmith, Donnington, The Rainbow all add to the authenticity of the heady days with the usual studio polish sanded off for a rougher and tougher, raw finish. Definitive? As near as you’ll ever get.

Take a trip back through the mists of time and watch Saxon performing what else but Denim & Leather:

The groundwork was done for 1983’s Power & The Glory to be their best selling album complete with the status symbol of boasting a Ridley Scott cover and a title track that would be one of the first on the team sheet in a ‘best of’ collection. Oh and not to forget the lengthy epic, The Eagle Has Landed…even from the title you know it’s going to be a major track in the canon. A track that followed in the wake of Maiden’s more extended pieces and their progressive leanings, it marks a slight shift in the album’s ‘less metal more melody’ philosophy.

The extra tracks from the sessions that didn’t make the vinyl cut, Make ‘Em Rock and Turn Out The Lights would easily have made the cut in the CD age and are included here, as are a bunch of demos from ’82. Not always the most riveting or revealing listen, the early drafts often bearing little variance from the finished item, they include Stand Up And Rock and Saturday Night. As you may expect from the titles, both fit the Saxon bill and 25 years later both again would have probably been polished off for the full album. However, the task of following up such a strong flurry of albums was starting to prove a difficult one.

It might have been the catalyst for the more commercial line taken with 1984’s Crusader that saw the band signed to major label EMI. A further shift of the balance from their unabashed heavy metal roots into a direction that toned down the metal and upped the element of rock. An album which not only see saws between the metal/rock dichotomy, but also provokes debate around the UK/US influence, the classic seventies/eighties trend or even the plunge into the ballad pool. The one thing that was clear is that Saxon were never going to follow the AC/DC route and continue to make the same album however many times.

The clues are there: recorded in LA with REO Speedwagon producer Kevin Beamish whose impact saw Do It All For You and Sailing To America awash with his influence and it’s easy to spot the Kiss styled choruses that are starting to appear. Chasing the American market maybe and possibly at a cost to their loyal denim and leather clad troops, many of whom became disillusioned on the strength, or lack of it, on Crusader and its clear transparency in its aim.

Crusader is an album that aside from the title track, lacks the real wealth of spoilt for choice, bona fide classics that fans had become used to on a Saxon album. Once again, the ten track running order is supplemented (rather than enhanced) by a clutch of studio demos plus the aptly titled Borderline and Helter Skelter that didn’t make the album.

Crusader at Wacken in 2014 with the strings

It concludes an interesting run of albums that historically marks a point at which Saxon started to take on new challenges having established their place in the annals of heavy metal history on their early releases.