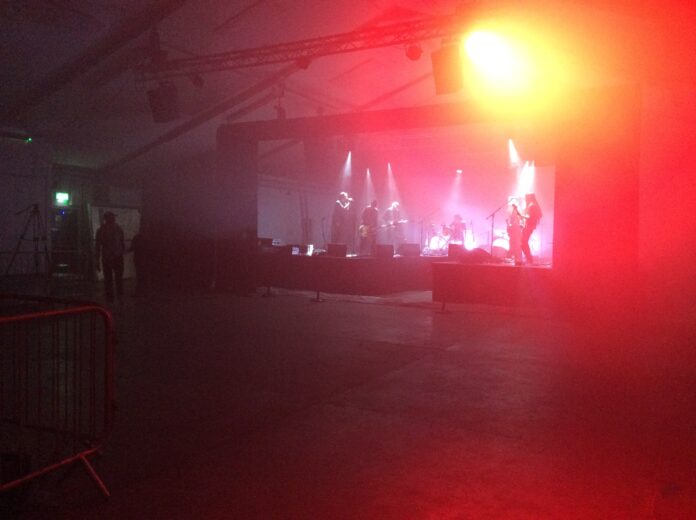 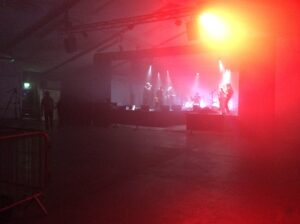 This is a culture clash that actually melts into something quite beautiful.

Savages angular post punk brilliance is lined up on one side of the U shaped stage and Bo Ningen psych noise trip on the other. On paper this should not work and in the spirit of dada it’s a great experiment in improv-noise-poetry but in the real spirit of dada those who dare win and in the dada concept of simultaneous poetry the two bands are creating a mind melting trip with a perfect collaboration that is about to be released as the Words To The Blind album – a 37 minute simultaneous sonic poem.

And that’s just the soundcheck.

This is a bit unusual- a review of the gig before the gig but then LTW get to see the whole set from start to finish and are instantly consumed by its sense of ambition and it’s beauty and noise before having to dash off across London for Einsturzende neubauten in what be one of the most heavenly gig clashes of all time.

There is a lot of epic music around at the moment from Swans to Einsturzende Neubauten it seems like the flowering of the true underground and yet another step forward in what to be considered ‘beyond’ music into a mainstream that is looking for something that justifiers being called alternative.

The concept tonight is simple yet brilliantly executed.

Initially it came from Savages guitar play Gemma Thompson was was reading a book on dada whilst the band were working on their soon to come second album. Intrigued by the playful deconstructions suggested by the 1916 art movement as it reacted with madness to the real madness of the First World War raging all around. Dada has been so influential after it started at its own Cabaret Voltaire club in Switzerland and its tendrils have reached outa hundred years later and sparked the guitarist who enthused the rest of her band before emailing Bo Ningen and bringing them on board.

Those elements of playful dissonance and contrasting slashes of art and cut and paste culture were an obvious influence on dear old grandfather punk back in the day and in the 21st century make for a great palette for two adventurous bands like Savages and Bo Ningen- who face each other in a stark contrast of the bohemian black stark and angular Savages and the hairy, almost feminine boys from the Japanese band in their brilliantly original regency flamboyance- in this world everything is blurred and back to front and mixing in the from the music to sexual battle lines and its this breakdown that is at the heart of all this noise and beauty.

Both groups are at the forefront of the good stuff at the moment- Savages create a brilliant post punk fused pop music with a swooping melancholic neo Gothic rush and are one of the best groups out there- their tightly structured and highly imaginative rushes made their debut album, Silence Yourself, one of the key releases last year and they contrast brilliantly with Bo Ningen whose music is as free flowing as their Kraut rock style hair explosions. The Japanese now based in London band have been ripping the template apart for good long time now and are the perfect juxtaposition and foil to Savages equally adventurous in a different way music.

The two groups are placed opposite each other on U shaped stage with the drummers sat at the back and then peel off with guitarist facing guitarist, bassist nearly facing bassist and vocalist facing vocalist- theoretically this should make for a strange dynamic but somehow it helps the two bands form a powerful whole.

For 8 musicians crammed into the U shaped space they make a carefully thought out sound. This is not a noise for noise sake, here everyone has their space in the music which switches from moments of sheer spectral beauty to glorious noise, from moments of riveting tension and near silence to a stunning avalanche of screeching feedback and stunning drumming in the Battle track which is one of the five parts of the 45 minute piece.

The set starts with the two vocalists facing eachother with Jehnny Beth reciting a poem in French and interjections coming back at her in Japanese as the musicians twitch getting ready for the tidal wave of sound and when it come it’s like a rush along your cortex like all classic sound should be.

Somehow through the 45 minutes they sketch out a whole new noise, a 2st century dirty disco of imagination and texture that makes this spectacle equal to the noise gods who have been playing with dissonance, art and beauty for decades.

The talk is for more shows and it would be great if this was not just a one off project but something that would appear at those great left field festivals that dot the horizon these days.

Music as breathtakingly imaginative and potent as this and played with such precision and skill and live for the moment sense of the jams should be treasured.