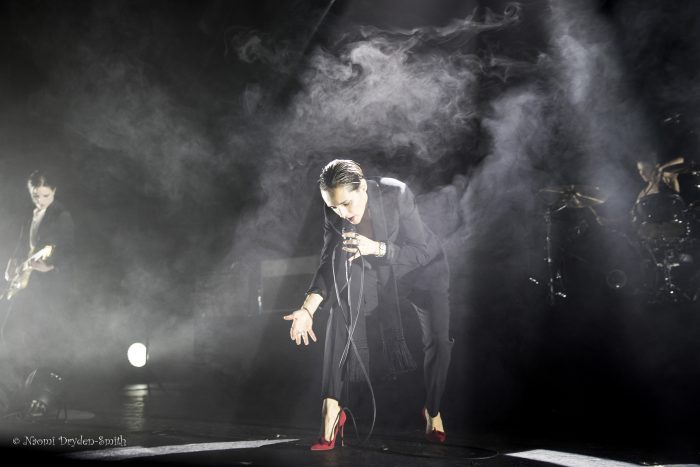 Naomi Dryden-Smith went to check out post-punksters Savages’ biggest London show so far, a blistering set to close their 2016 tour

It’s impossible to write about Savages without referencing Siouxsie and the Banshees in the very first sentence. They should probably be the first four words, in capitals. There is no question that had it not been for Siouxsie and similar acts such as Bauhaus and PJ Harvey, Savages would probably not exist – or else in a very different form. This is not a bad thing, and if you love Siouxsie, Bauhaus and PJ Harvey then there’s a strong chance for Savages.

The Siouxsie comparisons begin with Jehnnie Beth’s voice, which shares the same rich, dark timbre, and run through to her huge confidence, bordering on arrogance. Wearing possibly the most fantastic shoes to grace the stage at Brixton, she is sexy, sassy, at times intriguingly androgynous and at others unquestionably feminine. This persona is echoed by her bandmates, and the overall feeling is of power, a badass girl-gang who are unequivocally passionate about what they’re doing. There are virtually no smiles. 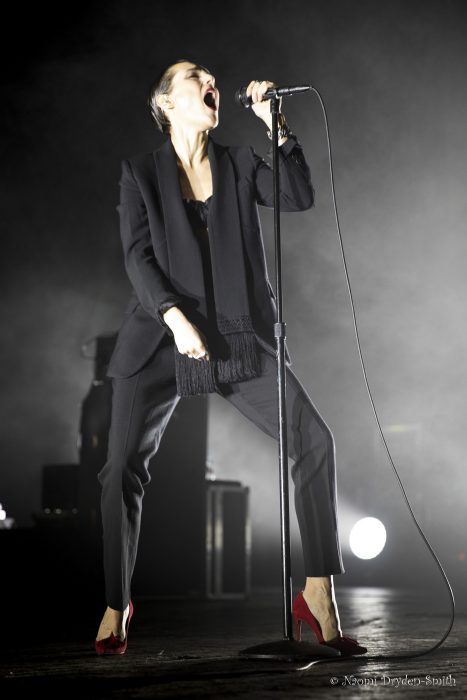 The noise output of this band is phenomenal. Fay Milton is a hugely talented drummer, she is a driving force behind many of the songs, propelling chaotic, thrashy rock numbers like The Answer and I Need Something New forward to explosive, ear-drum numbing climaxes. These are not songs to particularly sing along to, nor dance really. It’s more a battering by a barrage of screaming guitars and thundering drums, a feeling of being inadvertently caught in the vortex of a passing Eurofighter. With a bucket load of seduction thrown in. There can be a tendency to repeat an angry phrase over and over again with increasing intensity, effective at times, but sometimes a bit of a cop out. Songs like Hit Me and TIWYG are quite repetitive and less tuneful than Shut Up and Adore, which are so good – arguably their best songs.

What’s obvious is that this a band massively-loved by its audience – surprisingly bereft of anyone vaguely punk or alternative-looking, it encompasses upper middle-aged down to students. No-one down the front seems to complain when Jehnnie Beth climbs over the barrier to stand on adoring hands and shoulders at least twice, although the health & safety aware are pleased that she removes her 4-plus-inch stilettos first.

Savages add extra depth to this gig by starting with a tribute to Leonard Cohen, and ending with a cover of Marianne Faithfull’s Why D’Ya Do It?, at the same time as Faithfull is honouring Leonard Cohen at the newly reopened Bataclan in Paris. It’s a really nice touch.