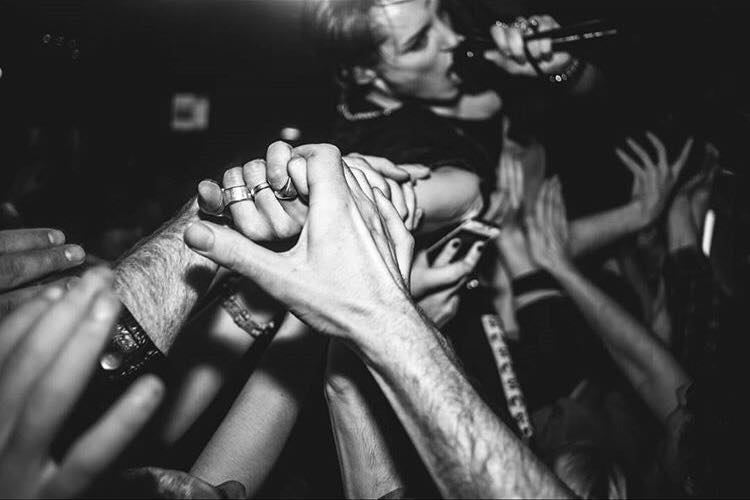 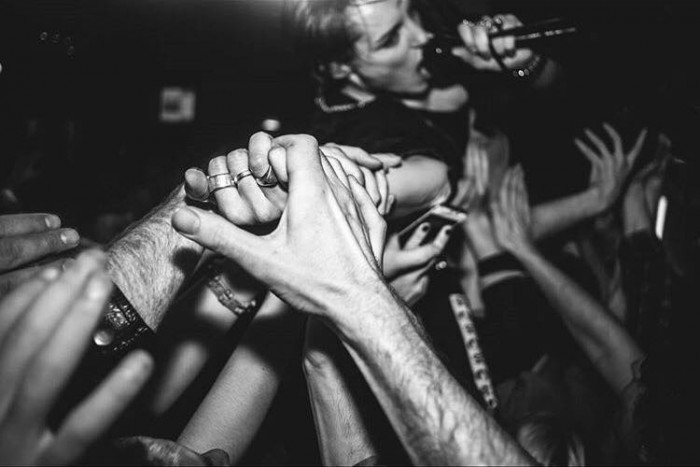 When I first reviewed Savages for Louder Than War in 2012, I was so impressed that for the first time in over 30 years of gig-going I stayed behind to congratulate the band, eventually buying a T-shirt directly from the singer, and telling her: “Amazing gig!”

Here in 2016, forgettable debut single Flying To Berlin has vanished from the band’s set, and singer Jehnny Beth can no longer be spotted lurking shyly in the shadows; these days her stage presence is confident, instinctive, formidable.

Tonight in Kingston-upon-Thames we’re treated to a night of, at times, almost overwhelming primal rock bliss. The occasion is a launch for Savages’ new album, Adore Life, and the event has attracted a crowd represented by both the town’s mosh-hungry student population and older fans, all drawn to the band’s post-punk flavoured blasts; all are welcome and all are elevated at this wall-rattling sonic communion. Inspired by the their musical ancestors but utterly thrilling in the context of now, Savages revive notions of gigs as rituals; amplified brutality as a source of shared release and purification.

In recent weeks, any critical questions about the band’s artistic merit have tended to focus on French-born Beth’s lyrics, written in English, but there’s an admirable vulnerability and honesty in her approach, particularly on the new album, and besides, any lyrically fragile moments are totally convincing while these songs are battering your ears; the music’s power sweeps any lingering doubts aside, and you simply BELIEVE.

As the volume builds, Adore Life’s lead single The Answer becomes hypnotic, the remarkable Gemma Thompson’s circular guitar riff relentless and seductive, Jehnny repeating “ain’t you glad it’s you?” over the wall of fizzing noise. Another new song, Sad Person, is lean, muscular, straining at the leash, the band knowing exactly when to hold back and when to unleash the full force of their fiercely beautiful tribal dub attack.

Adore Life, which explores the vulnerability of human existence, is introduced by Jehnny urging us to “enjoy the moment” and grab life while we can, a simple idea made profound by recent shocking events in her native Paris. Meanwhile, Slowing Down The World provides a darkly funky gateway to the adrenaline rush of songs like I Need Something New, a track that burns slowly then erupts into starbursts of dark energy, propelled by drummer Fay Milton, breathtaking as always, bouncing and grinning behind her kit, and bassist Ayse Hassan, whose euphoric playing invites us to slip into a tranced-out state like her own.

Surrender is a woozy departure, slow and cinematic, while another recent addition to the band’s reportoire, T.I.W.T.G., is the signal for the crowd to lose any lingering inhibitions, and as the band let rip and career through No Face, Hit Me, Husbands and finally the anthemic Fuckers (“Don’t let the fuckers get you down”), Beth throws herself into the crowd, a forest of hands holding her aloft, the natural conclusion of the two-way love affair that defines Savages’ live performances.

Four years after that first review, I still want to stay behind and congratulate Jehnny, Gemma, Ayse and Fay. Every Savages show makes you feel like it’s your first gig ever. An extraordinary band.