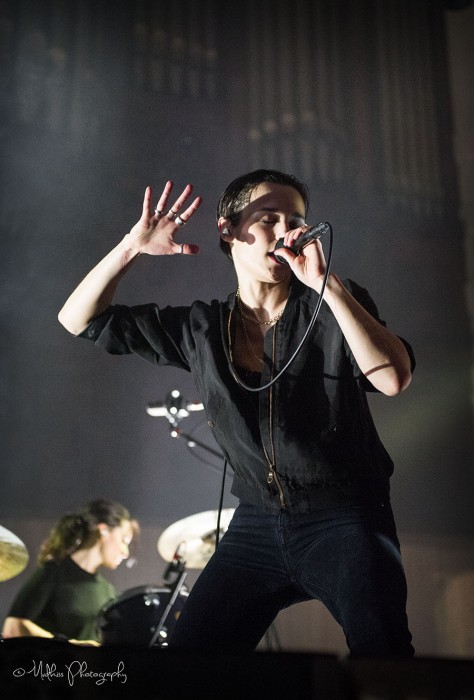 There is a perfect moment in the middle of Savages enthralling set when singer Jehnny Beth leaves the stage and walks across the upturned palms of hands of the packed crowd. Like a 21st century Iggy Pop she stands there like an Electric Pharaoh soaking up the adulation and soaking up the bands thrilling electricity as they deconstruct their sound into rumbling beats and guitar phlange.

It’s a spectacular set piece and underlines the band’s new found confidence as they emerge from their engrossing underground chrysalis that grabbed them much attention with their debut Silence Yourself album. They have now opening and emotional performance Pandora’s box of dark butterfly action. The new album Adore Life is one of the year’s best so far and a confident and supremely dark and intense collection of songs that sees the band brave enough not to play the polished neo new wave card cul de sac of so many of their predecessors and step deeper into the dark heart of the great music without ever losing focus of just what is great about their own knack of carving pop from the thrilling noise.

Tonight’s extraordinary performance underlines this. Somehow Savages have managed to land into the middle of 2016 with an acclaimed second album of dark and personal neo Goth pop that updates the unholy trinity of dark post punk like the inspirational deconstruction of the guitar by Bauhaus’s Daniel Ash, Siouxsie’s imperious ice queen and Joy Division’s emotional skree without sounding like any of them.

If Jen’s increased role as the front person supreme underlines the band’s seemingly natural step into the mainstream as a fully fledged dark and intense festival high point, the rest of the band have not been slipping into the shadows. Gemma Thompson is a great guitar player, toying with the electricity to create soundscapes and never rely on the dull and cliched and building new sounds and atmospheres that give the songs their dynamics and mood whilst the rhythm section of bassist Ayse Hassan and powerhouse tribal drummer Fay Milton is currently one of the most powerful and original in rock music. The three of them toy with the songs, stretching them out and finding new shapes for the open ended music to match the mood of the whole band as they seek out the edge of their own musical universe.

We have waited a long time for a band like this to lay themselves open emotionally and creatively and break out. And Savages are raw emotion – these are songs of a very human nature – love and lust and the hurt of existence entwined around the pounding rhythms and powerful bass lines. These are songs of the pain of emotion and songs of a dark intensity that are perfectly captured by Jen’s voice and her wiry frame that seems to physically reflect the music.

Currently one of the most powerful bands out there, Savages have deconstructed their sound on the second album and instead of ‘going pop’ or doing the ‘right thing’ have found space and new dark nuances in their music. A darker more transfixing sense of emotional skree that has taken them deeper into the heart of darkness.

So few people dare to take this trip now, so few people get to this space – the verge of the big breakthrough and take this gamble. The band’s debut album may have been a startling calling card but it’s the new one that is a defiant collection of 21st century, feedback drenched, soul power that makes for a gripping live show.

They are leaving themselves vulnerable and wide open like all the great music does like on their debut adrenaline rush calling card, Husbands which is despatched early and stretched out taut and linear. The rest of the set follows suit – shapeshifting the songs with a restless creativity to match their unique energy and heart on sleeve creativity.

For more information about Savages and to buy ‘Adore Life’ visit https://savagesband.com. They can also be located on Facebook and Twitter.